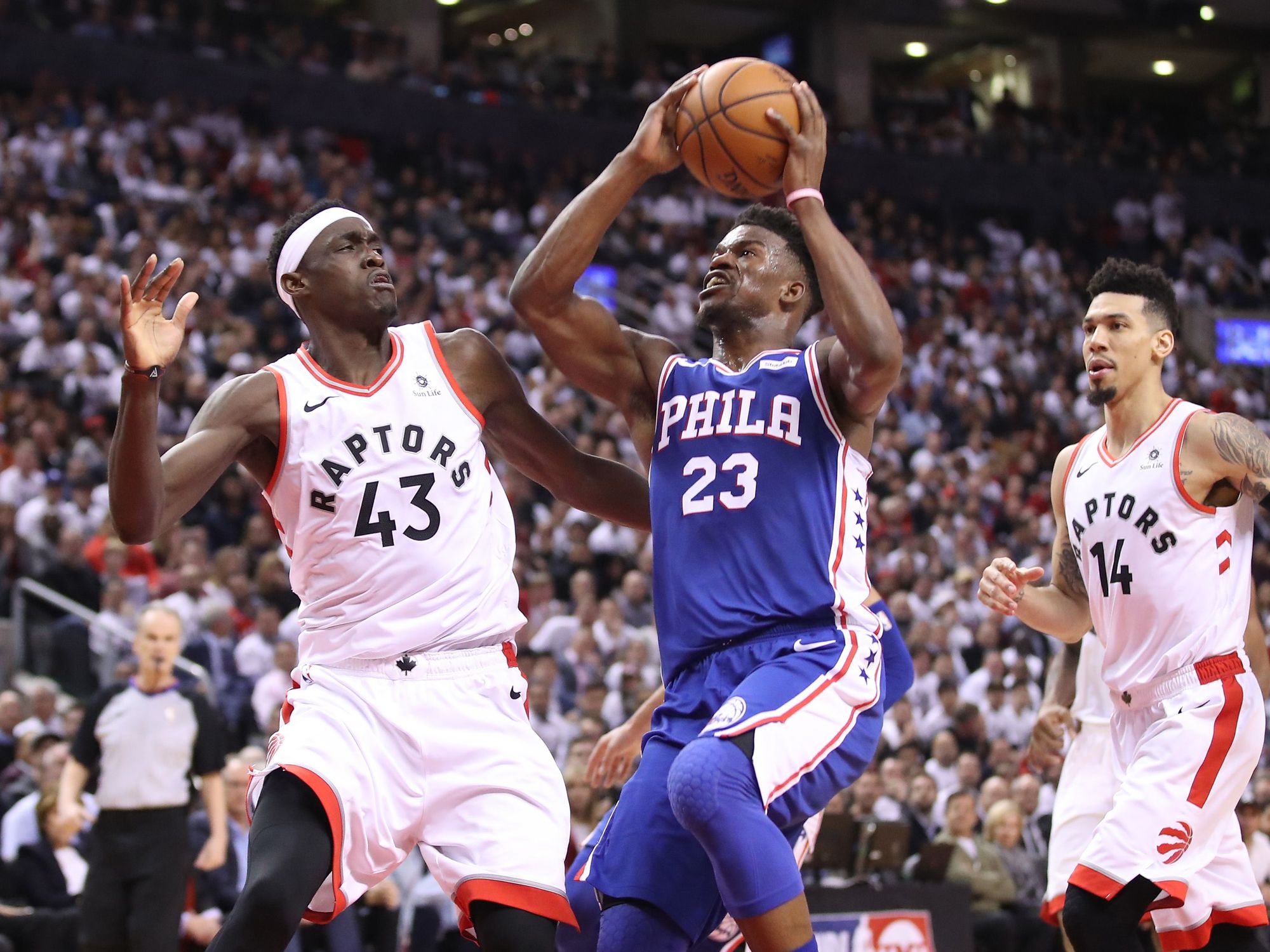 With a stringier defensive scheme, Jimmy Butler and the Philadelphia 76ers have evened the series and stole homecourt advantage from the Toronto Raptors with an impressive 94-89 victory. Butler led the way for Philly with an all-around performance of 30 points, 11 rebounds and 5 assists, including clutch baskets and assists that proved to be the game-deciding stretch of Game 2.

With the Sixers comfortably leading 83-70 in the halfway mark of the fourth quarter, the Raptors launched an 8-0 run, capped off by a Kawhi Leonard and-one conversion. Toronto combo forward Pascal Siakam further cut the deficit to only four with a corner three-pointer, but Butler readily answered with a triple of his own off a smart pass from the double-teamed Joel Embiid. Then All-Star point guard Kyle Lowry hit two consecutive triples to cut the lead to 90-87, with Siakam converting on a putback to trail by only one point. But Embiid, who only had 12 points in the win, spun through Raps defensive center Marc Gasol for an impressive lay-up that gave Philly a 92-89 lead.

Ben Simmons, who had a quiet scoring night of only 6 markers, earned some praises from Sixers head coach Brett Brown. Brown says that Simmons did a great job in defending Leonard, per Kevin Arnovitz of the ESPN.

"I think Ben did a really good job on him, and we tried to have different looks at times where we doubled him, and we did. By and large, it was Ben's assignment, although other people inherited him if he got switched out or Ben was out of the game."

Still, much of Philly’s success in regulation should be credited to the heroics of the 29-year old Butler, who bounced back from a forgettable Game 1 outing. Brown points out Butler’s leadership as the barometer for the team’s gut-wrenching win, per Jeff Zillgitt of USA TODAY.

"That was the adult in the gym. I get as excited at the volume of 3s that he sought as much as anything. He was just a tremendous rock. He willed us to a lot of different situations."

Despite having a tougher offensive match-up, Leonard still finished with a team-high 35 points, 7 rebounds and 6 assists for the Raptors. Siakam chipped in 21 points, 7 boards and 4 steals, while Lowry netted 20 markers.

Nikola Jokic and the Denver Nuggets showed poise beyond their years as they turned back Damian Lillard and the surging Portland Trail Blazers with a 121-113 win in their semi-final series opener. Jokic, who is more known for his flair for passing, continued his impressive shooting streak with a brilliant night of 37 points, 9 rebounds, 6 assists, 3 steals and 2 blocks. Nuggets young spitfire guard Jamal Murray scattered 23 points and 8 assists, while veteran power forward Paul Millsap logged in 19 points and 6 boards. Denver’s offense was clicking on all cylinders as they shot a stellar 51% field goal clip, while racking up 22 total assists.

Millsap says that Jokic’s tremendous versatility on offense is the starting point for the team’s success on that end, even comparing him to the great football quarterback Tom Brady, per the Associated Press.

"He's a sponge. He picks it up. He sees how people are playing him and guarding    him and he makes the right play every time. That's what's great about him -- he  doesn't force anything. Everything is going to be the right play. He's going to make the right reads. He's like a quarterback out there.

I consider him like a Tom Brady -- he's always going to pick you apart and make the right reads. Commend him for doing that at this stage in his career. It's  unbelievable."

Lillard led the charge for the visiting team with 39 points and 6 assists, but accounted for 6 of the Blazers’ 18 turnovers. Enes Kanter scored 26 markers in the loss, while Rodney Hood came off the bench to produce 17 points. For the Blazers to bounce back in Game 2, they have to cut down on the turnovers and also prepare a better defensive scheme for the Nuggets’ unstoppable offense.