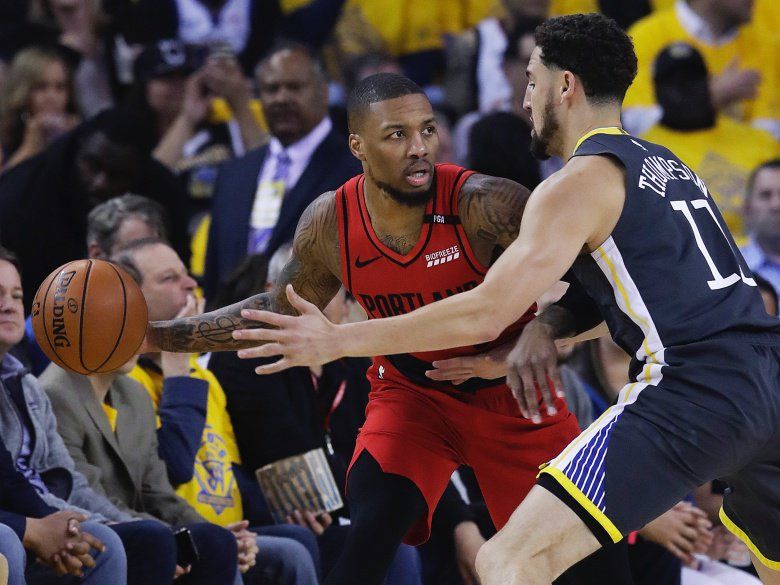 The Golden State Warriors trailed for the most part of the night before they displayed the unrelenting might of a champion to rally past Damian Lillard and the Portland Trail Blazers, 114-111. The usual suspects were again on work for the Dubs as Stephen Curry led all scorers with 37 points, on top of 8 rebounds and 8 assists. All-Star shooting guard Klay Thompson came away with 24 markers, while Draymond Green put up another all-around performance of 16 points, 10 boards, 7 assists and 5 blocks. The Blazers actually had it going with a 15-point lead after the first two quarters, but the Warriors were able to turn in their signature third quarter burst to tie the game entering the final period. Both teams would exchange leads late in regulation, but Golden State’s offensive execution in the last two minutes proved to be the turning point of the night. Draymond made excellent decisions on two consecutive possessions for the Warriors – lobbing a pass to a cutting Kevon Looney for an easy alley-oop connection, then rolling to the rim to receive a brilliant pass from Curry for another easy lay-up to put the Dubs up by three. Veteran defensive ace Andre Iguodala also did his damage on the ensuing play, stripping the ball off Lillard to deny the Blazers the opportunity to force an overtime period.

Green says that despite finding themselves in a deep hole entering the second half, their championship experience really paid off in the victory, per Martin Rogers of USA TODAY.

"Our experience really paid off for us tonight having a bunch of guys who just won't quit. We've been here before. When you're on a run like we're currently in, you've seen everything. Down eight points with what, four minutes to go, or whatever it was, just got to keep going, because we know we can erase eight points."

Lillard led the way for Portland with 23 points, 10 assists and 5 rebounds, while CJ McCollum netted 22 markers and dished off 5 assists. Seth Curry, the less-heralded of the Curry brothers, showed that he isn’t just a pushover, finishing with 16 points off the bench. He also had 4 steals in the game, all of which came from stealing the rock off his brother Steph.

Bucks offense clicks on all cylinders to turn back Raptors anew

Giannis Antetokounmpo and the Milwaukee Bucks started out strong on both ends of the floor and their energy set a masterful tone as they handed the Toronto Raptors a convincing 125-103 beatdown in Game 2 of their Eastern Conference Finals match-up. Antetokounmpo, who stormed right out the gates with a tremendous dunk and an equally-impressive denial of Raptors center Marc Gasol, scattered a dominant double-double outing of 30 points 17 rebounds, 5 assists and 2 blocks. Milwaukee’s great roster depth was also on full display in Game 2, as three players of their second unit finished in double-digit scoring. Stretch forward Ersan Ilyasova chipped in 17 points, 3 boards and 2 steals, Malcolm Brogdon tallied 14 points and 5 assists, while veteran point guard George Hill produced 13 markers. The Bucks also outdueled the Raptors in the rebounding department with a 53-40 advantage, and took care of the ball for the most part of the night, committing only 7 turnovers in the win.

Bucks head coach Mike Budenholzer praised Giannis’ phenomenal performance in the win, but also emphasized how the team’s individual talents are coming together at this crucial part of the season, per Jeff Zillgitt of USA TODAY.

"We want guys that are basketball players that have high IQs that can do, like you said, dribble, pass, shoot, can make reads, make decisions. We try to develop them. We try and empower them. We try to play a way where they all feel like they can contribute and do things. Hopefully that's paying off for us, and guys appreciate it. I think they grow and develop here."

Kawhi Leonard again led the charge for the Raptors, tallying 31 points and 8 rebounds in the loss. Kyle Lowry contributed 15 points and 4 assists, while Norman Powell came off the bench to produce 14 markers. However, the Raptors’ supporting cast again ultimately failed to stamp their imprint on the game, with their second-most consistent scorer Pascal Siakam coming up with just 8 points, and Gasol only accounting for a measly total of 2 points.