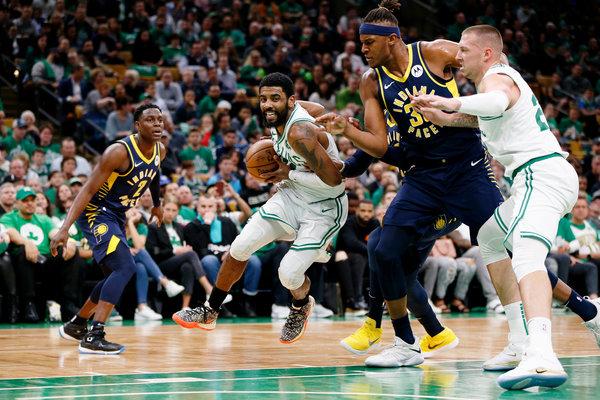 Irving and Tatum combine for 63 as Celtics take Game 2

Down by 11 entering the deciding quarter, the Boston Celtics showed why they’re considered an elite team in the East as they rallied past the Indiana Pacers to carve a 99-91 victory and take a commanding 2-0 lead. Kyrie Irving led all scorers with 37 points, and also had 7 assists, 6 rebounds and 2 blocks. Sophomore forward Jayson Tatum came up with one of his best games of the season, finishing with 26 points and 4 rebounds, including three makes from beyond the arc. A Cory Joseph floater pushed the Pacers’ lead to 11 at the end of the third quarter, but Boston was able to come up with a decisive run off Kyrie’s two consecutive triples that gave the Celtics an 84-82 lead. It was a back-and-forth affair in the final minutes of the game, but a Tatum dish to the cutting Gordon Hayward iced the win for the Celtics.

Head coach Brad Stevens says that the Celtics got back in the contest through the leadership of veteran center Al Horford, especially on the defensive end, per Boston’s official team page in NBA.com.

“You know, just continue to play the game one possession at a time.  I thought the group at the start of the fourth kick-started us off well, and then when some of our starters came back in, I thought they really played well.  Al (Horford) played I think 16 straight minutes or 15 straight minutes, and I told him I’d use one of my time-   outs that I didn’t use so he’s probably pissed at me.  But he is – I thought his play on the glass, his play protecting the rim, and then everybody else moving the ball and  finding the next right shot just kind of allowed us to hit singles and get back in it.”

Bojan Bogdanovic, who hit three consecutive triples in the dying minutes, led the Pacers with 23 points, 8 rebounds and 4 steals. Tyreke Evans had 13 points and 7 boards off the bench, while Thaddeus Young chipped in 15 points, 6 rebounds, 3 assists and 3 steals.

The league-leading Milwaukee Bucks flexed their might once again as they clobbered the hapless Detroit Pistons, 120-99. All-Star forward Giannis Antetokounmpo led the way for the Bucks with a double-double performance of 26 points, 12 rebounds and 4 assists. But the Greek Freak got a lot of contribution from his supporting cast, as veteran point guard Eric Bledsoe filled the stat sheet with 27 points, 6 assists, 4 rebounds and 3 steals. Khris Middleton chipped in 24 points, while Pat Connaughton had 18 markers off the bench. Milwaukee’s offense was in full brilliance the whole game as they hit a stellar 52% field goal clip, including 42% of their attempts from deep.

Connaughton, a 6-foot-4 forward who also had 9 rebounds and 4 blocks in Game 2, says that the team’s energy and hustle set the tone for their lopsided victory, via the NBA.com.

“I think it’s part of the culture of this team. We’re at our best when guys are really  putting forth that energy, that effort, and that consistency of both. Coach has harped on that throughout the season, and it’s our job to make sure we continue it whether  we’re starters or bench guys or not in the rotation at the moment.”

The Utah Jazz again found no answers for the opposing team’s high-powered offense as the Houston Rockets take Game 2 of their series in dominant fashion with a 118-98 victory. James Harden registered a triple-double performance of 32 points, 13 rebounds and 10 assists, including six three-pointers. It was a done game right at the get-go as the Rockets mounted a 20-point lead at the end of the opening quarter, and never looked back from there. Houston torched the Jazz from beyond the arc, logging in 17 triples in a 41% success rate. They also held Jazz star shooting guard Donovan Mitchell to just 11 points and 4 turnovers, missing 14 of his 19 total attempts and seven of his 8 tries from deep.

P.J. Tucker, the Rockets bruising defensive ace, had 16 points and four triples in Game 2. He says that the team is really difficult to beat when they locked in and focused on their game plan, per Jonathan Feigen of the Houston Chronicle.

"When we do what we do, I don't think anybody can beat us. It's a fact. I don't care. We come out every night, we talk, we communicate, and when our two guys get going and are aggressive, we're tough."

Jazz point guard Ricky Rubio gutted it out with an all-around outing of 17 points, 9 assists, 4 rebounds and 4 steals, while Royce O’Neale came off the bench to produce 17 markers. Still, the Jazz got lowly performances from their two stars, Mitchell and Rudy Gobert. It’s interesting to see how Utah adjusts from this point on, but it’s also hard to see them giving a laser-focused Rockets team a real challenge.