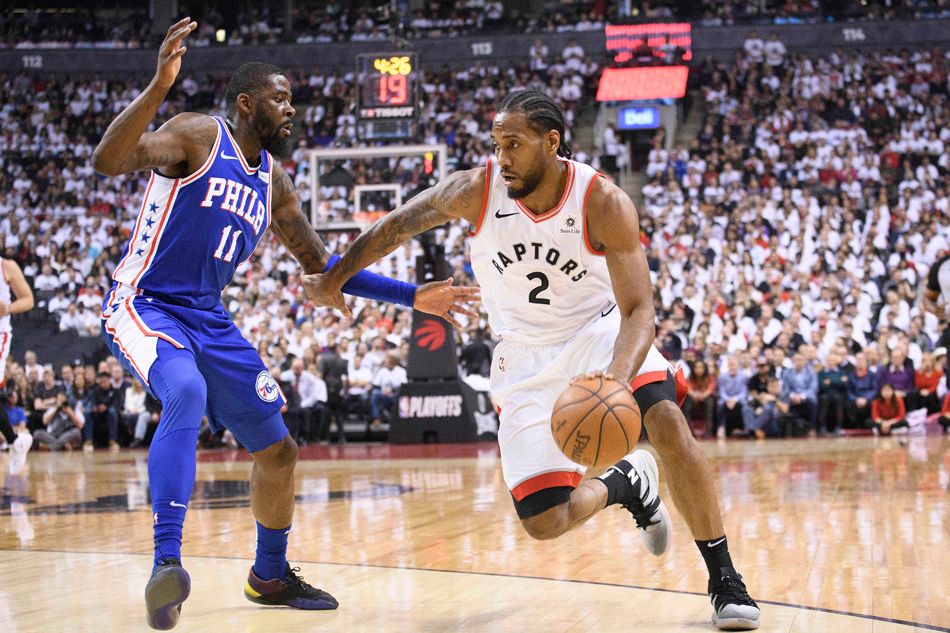 Kawhi Leonard got plenty of help this time around as the Toronto Raptors used a balanced offensive attack to turn back Joel Embiid and the Philadelphia 76ers, 125-89. Leonard finished with a double-double stat line of 25 points, 13 rebounds, 4 assists and 2 steals, but he also received a lot of contribution from his teammates. Young budding star Pascal Siakam topscored for the squad with 25 points, 8 boards, 3 assists and 2 steals, while Kyle Lowry and Danny Green chipped in 19 and 17 markers, respectively. Six Raptor players finished in double-digit scoring as they turned on the jets both on offense and defense.

Toronto was also able to limit Philly’s two superstars as Embiid only came up with 13 points, while Ben Simmons was a no-show again with a measly outing of 7 points, 4 assists and 5 turnovers. Still, the name of the game was the Raps’ offensive weaponry in Game 5, something that Lowry says is vital to take some workload off Leonard’s shoulders, per Bruce Arthur of The Star.

“We needed for everyone to play well. Not individually, but just more of a team, well- rounded game, when everyone played well, everyone played together, everyone worked. We felt good about ourselves. Everybody did. You know what I mean? Not, I   did it. We did it. That’s the thing about it that was good for us.

Jimmy Butler led the charge for Philly with a solid night of 22 points, 7 assists and 5 rebounds, while Tobias Harris scattered 15 markers and 6 boards. It was only a one-point game after the opening quarter, but Toronto’s 37-17 run in the second period took the life out of the Sixers. Philly head coach Brett Brown says that the team’s inability to turn things around during the crucial Game 5 was the cause of their demise.

“I think we got hit in the mouth. Toronto came in, and they hit us in the mouth. We  tried to fight back, and we just didn’t have the firepower on the night to respond the way that I wished that we did.”

The series will go back to Philadelphia in Game 6, but the Raptors are entering that potential series-clincher with every bit of momentum on their hands.

Not wanting to let Game 5 be another one of those 50-50 contests all series long, Nikola Jokic and the Denver Nuggets brought the hammer down on the Portland Trail Blazers as they carved a convincing 124-98 victory and inch a step closer to the Western Conference Finals. Jokic finished with another all-around performance of 25 points, 19 rebounds and 6 assists, while Paul Millsap came through with a steady outing of 24 points, 8 boards and 2 blocks. Denver practically feasted on offense as they finished with a stellar 49% clip from the field, and also dominated the boards with a massive 62-44 advantage over Portland. On top of that, they limited Blazers star shooting guard CJ McCollum, who averaged 35.0 points in the previous two contests, to just 12 markers, including a lowly 5-16 overall shooting.

"They like that action with Jamal Murray and Jokic a lot. They're playing out of the corners with Will [Barton] and Gary Harris and [Malik] Beasley ... then when all  else fails, you've got to guard Millsap. They'll throw him on the block, and he's a handful for guys to guard because he's in the paint, face-up jumpers, he's making 3s. In transition, you got to find him, and then he's a monster on the glass."

Rodney Hood and Zach Collins came off the bench to contribute 14 points apiece for the losing team, but most of those markers came when the game was already under wraps in the fourth quarter. While it’s true that Portland’s offense sputtered in Game 5, the more important point of adjustment for them entering the elimination game would be on their defensive schemes.