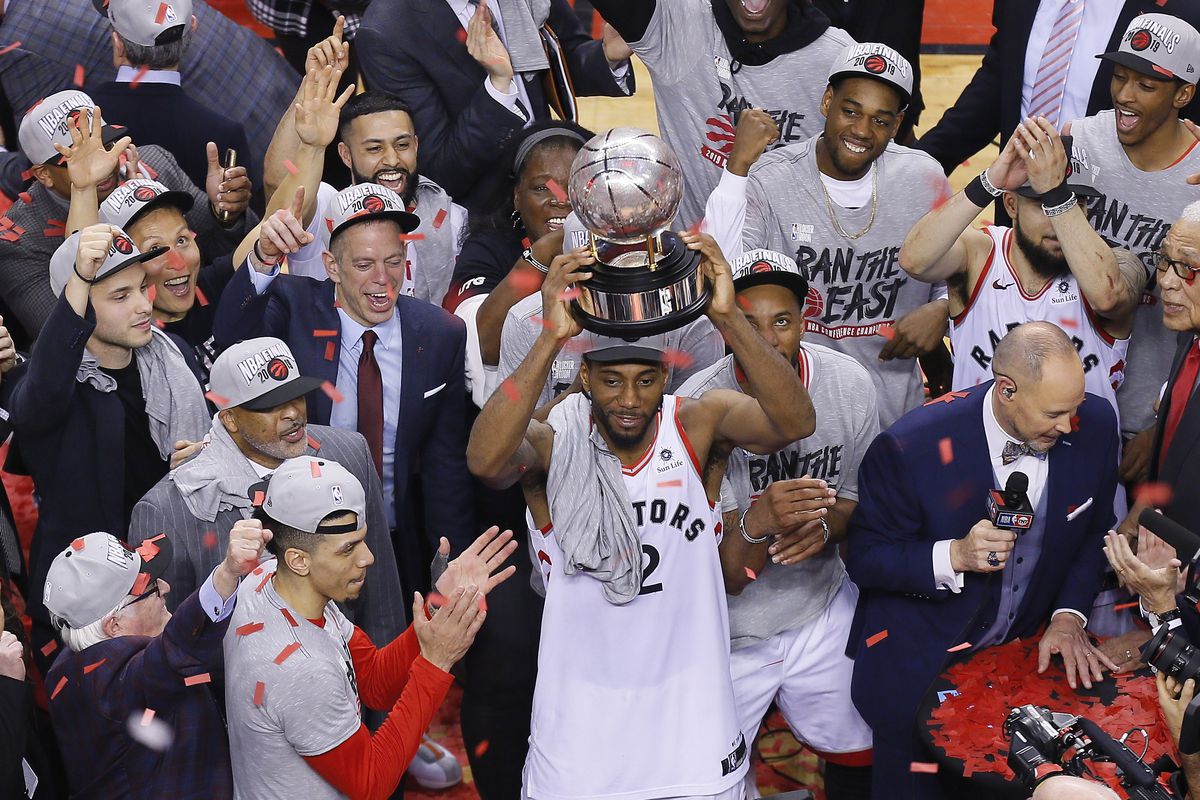 It’s just fitting that the Toronto Raptors reap the fruit of their hard work in front of their die-hard fans. Kawhi Leonard and the Raptors have now earned the right to enter the NBA Finals after beating Giannis Antetokounmpo and the Milwaukee Bucks, 100-94. Leonard led Toronto with a massive double-double performance of 27 points and 17 rebounds, on top of 7 assists, 2 steals and 2 blocks. All-Star point guard Kyle Lowry tallied 17 points, 8 assists and 5 boards, while Pascal Siakam and Fred VanVleet chipped in 18 and 14 markers, respectively. Similar with the previous game at Milwaukee, the Bucks mounted a 13-point lead after an explosive opening period. But the Raptors would go on a 26-3 run late in the second half to gain momentum and control of the game. Kawhi’s poster dunk over Antetokounmpo capped off that run and gave the Raps an 87-79 lead with six minutes remaining in regulation.

But the Bucks would mount a mini-run of their own, trimming the deficit to a single point with a Giannis lay-up. The two teams would answer back and forth with center Brook Lopez doing most of the damage for Milwaukee. Kawhi would answer back with a corner triple on the other end and Siakam’s putback lay-up gave the Raptors a five-point lead with a little below two minutes left on the clock. Lopez would again answer with two makes from the free throw line to cut the Raps’ lead to 97-94 with 23 seconds left in the deciding period. The Bucks intentionally fouled Siakam to stop the clock, but after the latter missed the second shot, Milwaukee failed to secure the defensive board and led to two more free throws from Leonard.

Norman Powell, who has been a key cog of the second unit for Toronto in this series, says that the leadership of Kawhi stabilized the pressure and emotions they felt in closing out the Bucks, per ESPN’s Kevin Arnovitz.

"It's what you play basketball for, for those moments. The one thing Kawhi really  stressed to us was just to enjoy it. Don't get too out of character, just enjoy the moment and continue to go out there and just lay it on the floor. So it was an amazing feeling just to be able to battle and chip away at it.

It's how you make history."

Antetokounmpo topscored again for the Bucks with 21 points, 11 rebounds, 4 assists, 2 steals and 3 blocks, while Lopez scattered 18 points, 9 boards and 3 blocks in the loss. All-Star Khris Middleton only came up with 14 markers, while stretch forward Ersan Ilyasova came off the bench to contribute 13 points and 6 rebounds. It was an excruciating loss for the Bucks after they stormed off the gates in this series with a commanding 2-0 lead.

Raptors head coach Nick Nurse gave heaps of praises for his resilient players, emphasizing how his squad has grown as a team this postseason.

"Our communication, scheme, switching, blitzing, our rotations, contesting shots, all  those things have been growing here since the start of the playoffs. The other thing is there are some moments, like stretches -- we call them consecutive stops -- and there are some stretches where it's darned hard to complete a pass against us. That  wears into a team after a while when you're up into them and you're denying, and everybody is just that connected and playing that hard."

The Raptors will face Stephen Curry and the Golden State Warriors in their first time to enter the NBA Finals. Toronto won their regular season match-up, winning both games. The Warriors will be without superstar Kevin Durant and starting center DeMarcus Cousins for the first two games of the series.