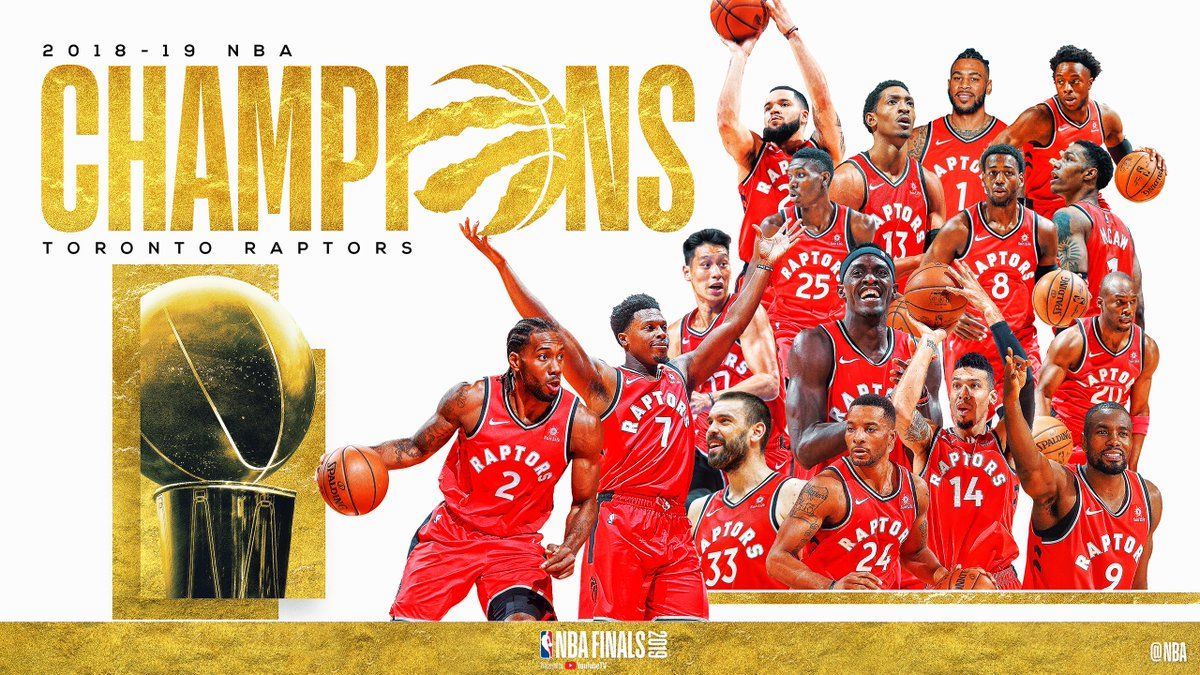 The NBA has found its new champions. In a highly-emotional sixth game of the series, the Toronto Raptors buckled up to work as they finally put the Golden State Warriors away with a close-call 114-110 road victory to close out the series and win the chip. It was also the Warriors’ last game at the historical Oracle Arena, an odd culmination to their five-year championship run that saw them win the trophy thrice.

Offense came from all over the place for the Raptors with long-tenured star point guard Kyle Lowry leading the way with 26 points, 10 assists, 7 rebounds and 3 steals. Young budding star Pascal Siakam also put up a team-high 26 points, on top of 10 boards and three made triples. Kawhi Leonard, who was later crowned as the Finals MVP, chipped in 22 points, 6 rebounds, 3 assists and 2 steals, while Fred VanVleet came off the bench to produce 22 points built on five three-pointers, and Serge Ibaka contributed 15 markers.

While the Raptors showed off their incredible roster depth, the Warriors’ luck on that department completely ran out. With Klay Thompson torching the Raptors with 30 points in just three quarters, the Warriors All-Star gunner would suffer an unfortunate fate. As he was on his way to a transition dunk in the two-minute mark of the third period, Raptors shooting guard Danny Green inadvertently fouled him on his way up, causing Thompson to fall down hard. He immediately clutched his knee that would turn out later as a Torn ACL. Klay still came back to shoot the two free throws, but was ruled out of the game after that.

The high-stakes game was tied at 88 entering the deciding quarter and it will be a back-and-forth affair from there. A Stephen Curry floater would put the Warriors up by three in the mid-way point of the quarter, then VanVleet answered with three made free throws off a Shaun Livingston bad foul. That would ignite a Raptors mini-run as VanVleet came back to score another triple to be followed by a putback shot of Ibaka to give the Raps a 106-101 lead. Toronto would not stop there as Lowry scored on a difficult step-back jumper to increase their lead to six.

Then the defending champs would put up one last gallant stand as Draymond Green hit a trifecta to cut the lead to three, then DeMarcus Cousins drove down the lane to chop the lead even further to 109-108 with 46 seconds remaining. Siakam answered with a runner for a 111-108 Raps’ lead, then Curry was fouled with 18 ticks left on the clock. The two-time MVP hit both free throws, then had the chance to force Game 7 when the Warriors forced the Raptors to commit a turnover in the ensuing play. But Curry would fail to save Golden State’s season as his triple bounced at the back of the cylinder, securing the championship for Toronto.

It was a roller-coaster ride for the Raptors even before the season began when they traded long-time star DeMar DeRozan to the San Antonio Spurs in exchange for the services of Kawhi. It was a gamble, and it paid off big time. Lowry, who has endured so many failures in his seven-year stint with the Raptors, emphasizes how winning it all has always been the team’s mission this year, per Jeff Zillgitt of USA TODAY.

"You don't do anything in this league unless you win the trophy. You can accomplish  this or that, but at the end of the day we have certain goals and standards that we want to reach. I think that's the one thing that we have all kind of just like — our end goal would be a championship. And that's what we have been working for all  year."

Toronto head coach Nick Nurse looked back on the difficult journey he went through with his champion team, per Tim Bontemps of the ESPN.

"It was a heck of a 12 months. I just try to take things as they come. Didn't look too far ahead. Obviously when we made some additions to the team, we thought we could be good, but we had no idea what the health status was and all those things.

You just got to go take the guys you got and go play and manage it the best you can."

For the Warriors, the injuries to both Thompson and Kevin Durant were indeed devastating. Health has always been on their side in their past championship runs, but not this time. Still, Curry knows they have done everything they could with the weapons left on their arsenal and has no regrets on the three-pointer he missed that could have won Game 6 for them.

"The shot was one I take 10 out of 10 times. And we ran a play that was kind of, we  got a decent look off of kind of a bobbled catch, and I could see the rim, so I shot it. I'll live with that. We always talk about that, myself and Klay, in terms of shots that we take, you live with it. I would shoot that shot every day of the week."

There will be a lot of questions moving forward for both teams as their superstars enter unrestricted free agency in the summer. While Durant and Thompson are to become free agents, their major injuries could cost them all of next season and that will be one of the main deciding factors of where they will choose to play beyond this year. Leonard will also be a top sought-after FA in the market, but pundits now believe that the two-way superstar could be inclined on staying at Toronto.

Still, the Raptors have come this far to finally hoist the championship trophy so enough of the offseason talks and just let them savor this wonderful moment.