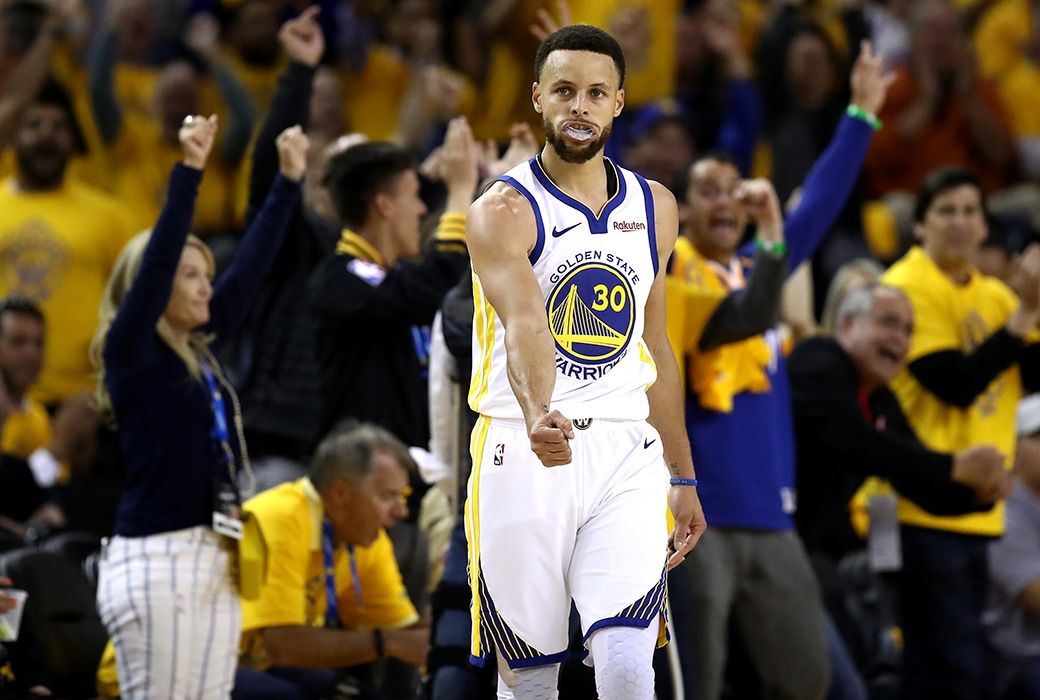 Despite coming in short-handed, the Golden State Warriors displayed the composure of a champion as they handily defeated the Portland Trail Blazers with a resounding 116-94 Game 1 victory. Stephen Curry led all scorers with a very efficient night of 36 points built on 9 makes from beyond the arc, and also dished off 7 assists and grabbed 6 boards. Klay Thompson played second fiddle as he impressed on both ends of the floor with 26 points, 3 assists, 3 steals and 2 blocks. It was a close game after three quarters before the Warriors went on a tear in the fourth quarter with a 39-23 advantage in points. Lost in the greatness of the Dubs’ star backcourt’s performance is the production of their second unit, who had a total of 33 points, including 9 markers from Jonas Jerebko and 8 from Quinn Cook.

With Curry and Thompson finally finding their groove at this crucial point of the playoffs, the atmosphere around the Warriors bench is again similar to the fun aura they had in their previous championship runs. Curry takes note of that, saying that the morale of the team has drastically grown, per Ramona Shelburne of the ESPN.

"You see the morale, like everybody's shoulders are up and smiles. Just     aggressiveness all over the floor, whether that's setting a screen or swing, swing or cutting hard, all that type of stuff. When you create good shots that way, it's fun for everybody."

The Warriors’ defense was also on-point in Game 1, limiting the Blazers to a paltry 36% clip from the field, including a very low 25% shooting from three-point territory. The bright spots of the game for Portland were the performances of role players like Enes Kanter, who secured a double-double outing of 10 points and 16 rebounds, and Rodney Hood, who shook off a knee injury to put up 17 points in the loss. Damian Lillard and CJ McCollum only scored a combined 36 points in the series opener, a farcry from their usual brilliant scoring displays in the previous rounds.

Warriors head coach Steve Kerr emphasized how important for them to contain both Dame and CJ, per Logan Murdock of NBC Sports.

"They are a tremendous backcourt. We're well aware of what they are capable of. So we're playing a lot of attention to them. Just trying to stay all over them if we can and not give up anything easy."

Game 2 is still slated at Oracle Arena where the Blazers have another shot at stealing one in Bay Area. DeMarcus Cousins is still sidelined for the next game, while Kevin Durant is reported to be unlikely to play.

After struggling for the most part of the first two rounds of the playoffs, stretch big man Brook Lopez came out firing in the nick of time as he helped the Milwaukee Bucks turn back Kyle Lowry and the Toronto Raptors with a close-call 108-100 win. Lopez was the Bucks’ most efficient player on both ends of the floor, posting a brilliant all-around stat line of 29 points, 11 rebounds and 4 blocks, thoroughly outplaying Raptors counterpart Marc Gasol, who only had 6 points in the game. Despite struggling with turnovers as the Toronto defenders doubled and even tripled-team on him, leading MVP candidate Giannis Antetokounmpo was still able to produce 24 points, 14 boards, 6 assists, 2 steals and 3 blocks. Malcolm Brogdon came off the bench to chip in 15 points and 3 assists, while Khris Middleton had an unusually quiet scoring night of 11 points, though he also grabbed 11 rebounds and dished off 4 assists.

The Raptors actually had the lead entering the fourth quarter, but the Bucks found their offensive rhythm when it mattered the most in regulation. Lopez, who was the unusual top scorer for Milwaukee, said that the team trusted the process and just exerted incredible effort on both ends of the floor despite not shooting the ball well in the first three quarters, per ESPN’s Kevin Arnovitz.

Toronto had the golden opportunity to steal homecourt advantage in Game 1, but came out flat in the deciding period. Lowry led the team with 30 points and 8 boards, including 7 makes from beyond the arc. Kawhi Leonard, who topscored for the Raptors with 31 markers, only had two points in the fourth period – both of them through the free throw line. Raptors back-up point guard Fred VanVleet reiterated that it was indeed a missed opportunity but they just have to regroup and prepare for the next game, per Jeff Zillgitt of USA TODAY.

"Obviously, it was a missed opportunity. We’re not running from that. But flush it. You can’t sulk on it. You can’t sit on it and think about it tonight. We’ll look at the   film, practice tomorrow and move on. We felt like we had a chance, and we didn’t  execute enough to go out there and get it done. Move on and try to get Game 2."

Game 2, which will be a pivotal contest for both teams, will still be played in Milwaukee.