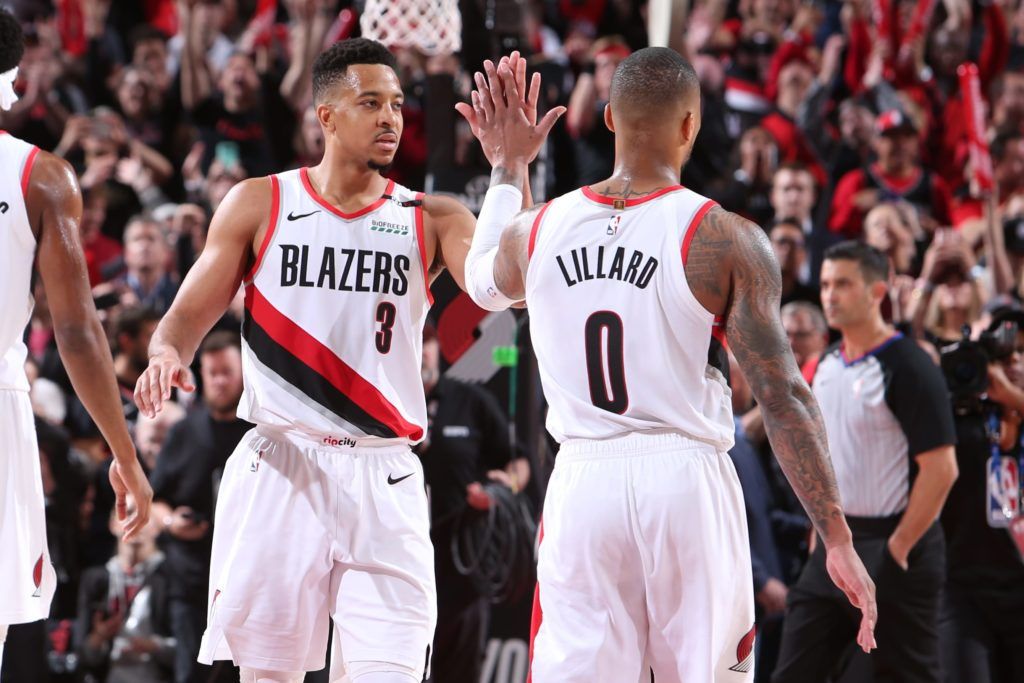 Lillard, McCollum combine for 53 in victory

In a match-up of two star backcourt duos, it was the Lillard-McCollum partnership that shined the most as they led the Portland Trail Blazers to a 126-118 victory over the Utah Jazz. CJ McCollum scored 28 points on five three-pointers, while Damian Lillard put up an all-around stat line of 25 points, 5 boards, 4 assists and 2 blocks. The Blazers stormed right out of the gates as they totalled a 38-point first quarter. As a team, they made 15 of their 27 three-point shots to compile a stellar 56% clip from deep.

The Blazers’ supporting cast definitely showed up for the team, but it was still their backcourt stars who reminded everyone that they are here to contend for a championship. McCollum says that it was a great experience playing against Utah’s talented guard line-up, as per the NBA.com.

"We knew this would probably be our last preseason game, so we wanted to come out and be sharp. Get some good conditioning in with the altitude and then go compete. They've got a good team, they got some good guards, I wanted to see where we were at before the season starts."

Zach Collins, who started alongside rim-protecting center Hassan Whiteside, contributed 13 points, 5 rebounds and 2 blocks in the win. Except for his two misses on the free throw line, Collins was perfect from the field as he made all six of his shots. With starting center Jusuf Nurkic still recovering from a major leg injury, there were some questions as to who between Collins and Whiteside will take Nurkic’s spot. Well, it seems that we already have an answer to that as Collins emphasizes how he enjoys playing with Whiteside.

“I love playing with Hassan, especially on defense because we’re both rim protectors and he’s very good at it. Just both of us being at the rim is going to be tough for the other team to score. On defense it’s fun and then offense is great too because he’s such a force in the paint and me being able to play on the perimeter balances it out, so it’s definitely a good duo.”

Mario Hezonja, an offseason pick-up for the Blazers, came off the bench to produce 12 points, 4 boards and 3 assists. Anfernee Simons had 6 markers and 6 assists, while Kent Bazemore made two three-pointers to total 8 points in the win.

Donovan Mitchell again topscored for the Jazz as he finished with 27 points, while his new backcourt partner Mike Conley poured in 20 markers. Rudy Gobert, the reigning Defensive Player of the Year, amassed a double-double night of 13 points, 15 rebounds and 2 rejections. The Jazz are yet to win a game this preseason.

Thanks to a second-quarter outburst from the 42-year old Vince Carter, the Atlanta Hawks had enough arsenal to beat the New York Knicks, 100-96. Carter came off the bench to contribute 17 points and 4 boards, including five makes from beyond the arc. Sophomore point guard Trae Young displayed his all-around game as he put up 23 points, 5 rebounds and 9 assists, while John Collins came up with a double-double pouting of 12 points and 14 rebounds. Rookie forward De’Andre Hunter continued his strong showing for the Hawks, netting 15 markers, including two three-pointers.

After the game, Carter told Malika Andrews of the ESPN that it is actually his plan to play all 82 regular season games for the Hawks. Despite being the oldest player in the league, retirement is still up in the air for the veteran star.

"I want to make sure I am available for every game. Obviously, it is Coach's decision, but I want to keep my body right so I can do that."

Julius Randle led the charge for the Knicks as he produced 20 points, 8 boards and 2 blocks. Bobby Portis, another new face in New York, contributed 16 markers while highly-regarded rookie RJ Barrett showed off his full repertoire as he finished with 12 points, 7 rebounds, 6 assists and 2 steals.

Playing without scoring wings DeMar DeRozan and Rudy Gay, the San Antonio Spurs banked on the ever-reliable LaMarcus Aldridge to carve a 128-114 victory over the Houston Rockets. Aldridge topscored for the Spurs with 22 points, on top of 6 rebounds and 2 assists. The Spurs also got an inspired game from returning point guard Dejounte Murray, who finished with 20 points and 4 assists. Jakob Poetl led the team’s second unit by scoring 16 points, while Marco Bellinelli and Derrick White put up 15 and 13 markers, respectively.

The loss spoiled Rockets star James Harden’s tremendous night. The Beard fired seven three-pointers on his way to 40 points, while grabbing 10 rebounds and dishing out 7 assists. Russell Westbrook, who appeared in front of the Houston home crowd for the first time as a Rocket, had 14 points but struggled with 8 turnovers.

But the Rockets’ glaring weakness throughout the game was their defense. They gave up 128 points to a team missing their top wing scorers, as the Spurs just shot at will and produced a very high 57% clip from the field. Rockets head coach Mike D’Antoni says that defense will be the team’s priority in practice in the next few days, per Jonathan Feigen of the Houston Chronicle.

“We’ve got to put the alarm bell out there and we got to get ready for the season, and we’re not there. You can see it. Our legs weren’t there. We’ll see (Thursday) and Friday night (in Miami) if we’re a little bit better.

And then we’ll have a couple of practices. I’m sure we’ll pick it up, but it wasn’t good tonight. Our defense did not give us a chance.”

Eric Gordon contributed 14 markers off the bench, while Chris Clemmons and Ben McLemore had 13 and 10, respectively. The Rockets will open their regular season schedule with a home against Giannis Antetokounmpo and the Milwaukee Bucks.