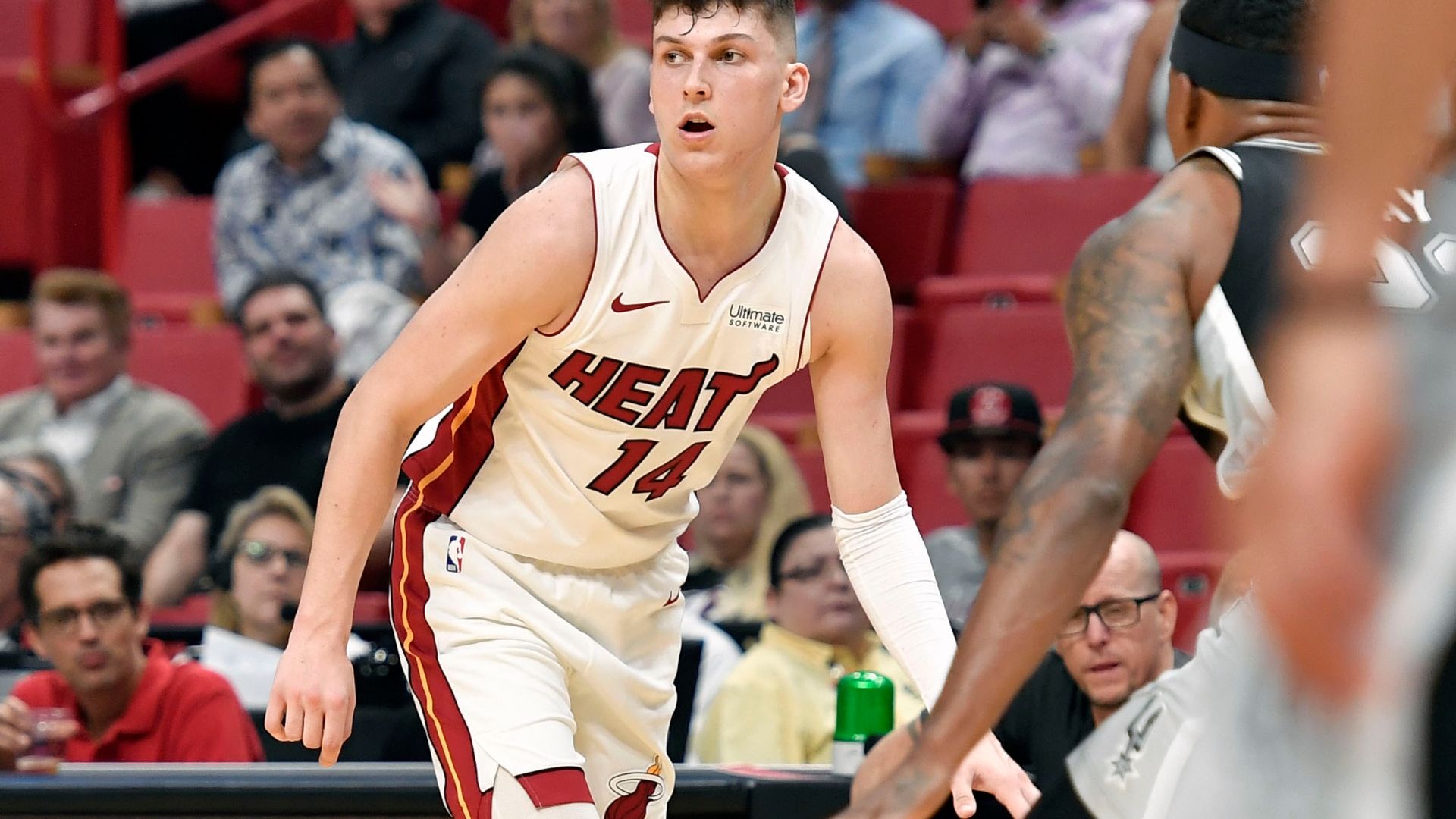 The post-Dwyane Wade Miami Heat started off strong as they romped the visiting San Antonio Spurs with a 107-89 win. Tyler Herro, the 13th overall pick of this year’s draft, showed the full repertoire as he dazzled with 18 points, 3 rebounds and 3 assists. Young budding big man Bam Adebayo racked up 14 points, 8 boards and 2 blocks, while Justise Winslow debuted at the point guard position and produced 11 points and 3 assists.

Jimmy Butler, the Heat’s newly-signed superstar, had a quiet night of only 10 points but also dished out 5 assists during the 23 minutes that he saw action on the court. In an interview after the game, Butler was impressed of Herro’s overall game but warned the young shooting guard that other teams will now heavily monitor his performance. Cody Taylor of USA TODAY’s Rookie Wire wrote a column on Butler’s comments on the rookie.

Another new face who debuted for the Heat is former Portland Trail Blazer Meyers Leonard. Leonard came up with only 5 points, but hauled down a game-high 11 rebounds. Interestingly, Leonard was paired with Adebayo on the Heat’s starting frontcourt. It remains to be seen if the ex-Blazer will retain that spot, considering that power forwards James Johnson and Kelly Olynyk didn’t play.

Aside from moving past the Wade era, the Heat also played their first game without defensive center Hassan Whiteside. Whiteside was traded to the Blazers in exchange for Leonard this offseason. With the seven-foot rim-protecting big man gone, there was obviously a change in the Heat’s defensive schemes. In the past, the team would just attract the opposing team’s offense to go to the middle and give Whiteside the opportunity to alter shots in the lane. Adebayo points out that they are indeed moving past that strategy as they are now implementing a perimeter-heavy defensive scheme, per Ira Winderman of the South Florida Sun Sentinel.

"It's going back to our no-middle approach. We're in more of a switching-type approach now, one through four and switching on the fours.

So, I feel like we’re going back to the no-middle situation and really getting after it, instead of funneling it to a shot-blocker.”

Other notable contributors off the Heat’s bench are big man Chris Silva (16 points and 9 rebounds) and Derrick Jones Jr (11 points).

Rudy Gay topscored for the Spurs with 12 points, while All-Star shooting guard DeMar DeRozan had 10 points and 3 assists. The Spurs only shot 40% from the field, and lost the rebounding battle to the Heat, 37-49. A bright spot in the loss was the all-around play of returning point guard Dejounte Murray. In just 19 minutes, Murray netted 8 points, 3 boards and 3 assists.

The retooled Oklahoma City Thunder squad put on a show on offense as they defeated the Dallas Mavericks, 119-104. Sophomore combo guard Shai Gilgeous-Alexander immediately impressed for his new team as he put up a game-high 24 points built on four three-pointers. Starting center Steven Adams scored 17, and even stole the show with a rare corner three-point make to start the first quarter. Dennis Schroder also had an all-around performance of 13 points, 6 boards and 5 assists, while Terrance Ferguson came off the bench to contribute 12 points.

However, the top storyline of the night was Chris Paul’s debut with the Thunder. The team acquired him from the Houston Rockets in the Russell Westbrook trade, and there’s a strong belief that the Thunder front office will just dump his massive salary to a willing team. Yet, it seems like OKC will hold on to Paul for a while. Head coach Billy Donovan even started the game with three point guards – Paul, Schroder and Gilgeous-Alexander. Although there were some kinks to improve, which is understandable as this was the Thunder’s first full game, the three-playmaker line-up could eventually be a deadly formation. In an interview with ESPN’s Tim MacMahon, Donovan says that he is putting a strong emphasis on fluid ball movement when he decided to play those three point guards together at the same time.

"All three of those guys are really important and they're drivers of our offense because they're smart, they have a really good feel of how to play and they're unselfish. They've got to be the catalyst to moving the basketball. Putting them out there, my feeling was to get them comfortable playing with one another, get them playing with a good pace and tempo and speed, and I thought we came out to start the game playing like that."

Paul only played 17 minutes, and had a quiet stat line of 6 points, 3 rebounds and 4 assists. Danilo Gallinari, another new acquisition, had a near double-double night of 10 points and 9 boards.

The Mavericks opted to rest main men Luka Doncic and Kristaps Porzingis in their first preseason game. Justin Jackson and Maxi Kleber led the team in scoring with 14 points apiece, while Jalen Brunson came off the bench to contribute 10 markers and 5 dishes.