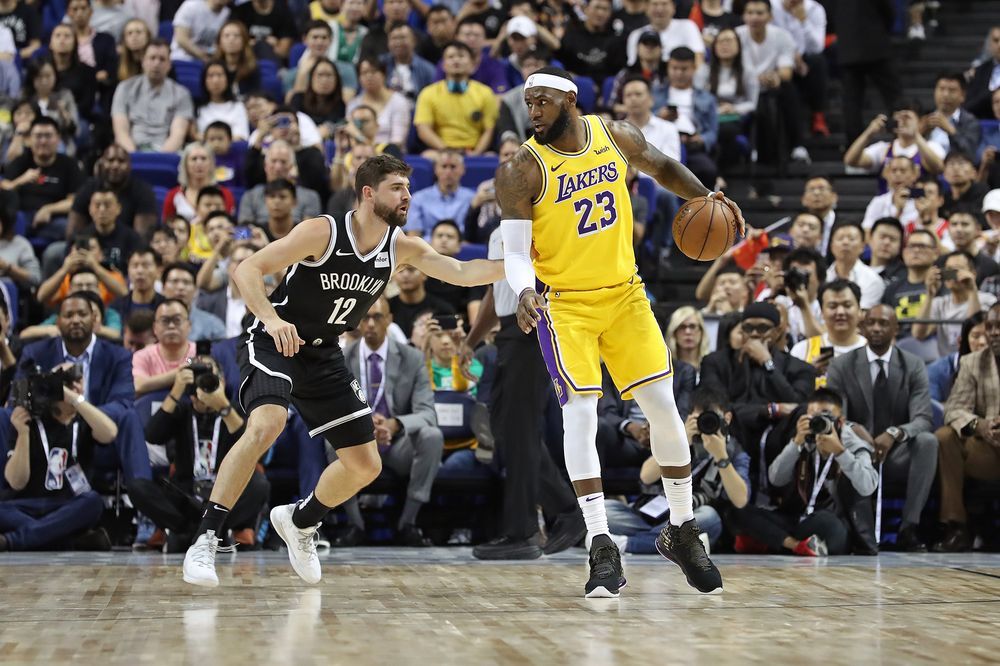 Amidst the serious tension between the NBA and its Chinese following, the Brooklyn Nets still played their A-game as they defeated LeBron James and the Los Angeles Lakers, 114-111. The retooled Nets had to overcome an early exit from superstar guard Kyrie Irving, who re-aggravated his injury after being inadvertently hit by Lakers point guard Rajon Rondo. Irving only saw action for a little over a minute.

Back-up point guard Spencer Dinwiddie immediately took the playmaking and scoring duties as he amassed a team-high 20 points, along with 7 assists and 3 rebounds. Newly-acquired two-way forward Taurean Prince continued his hot perimeter shooting as he made four three-pointers on his way to 18 markers. Dzanan Musa contributed 16 points off the bench in a game that saw the Nets have six players scoring in double digits.

Dinwiddie, who just signed a contract extension with the Nets last season, also had three makes from beyond the arc. Overall, the Nets shot a stellar 49% clip (20-41) from three-point territory. It just shows how deeper the Nets’ roster are this year, especially considering that Kevin Durant didn’t play and Kyrie and Caris LeVert only played a single minute each owing to minor injuries.

LeBron led the Lakers with 20 points and 6 rebounds, while Rondo carved out an all-around stat line of 18 points, 5 boards and 6 assists. Star big man Anthony Davis poured in 16 markers, and also displayed his passing ability as he dished out 5 assists. It is also worth noting that veteran center and former Defensive Player of the Year Dwight Howard started alongside Davis and James in the frontcourt. Howard converted his two attempts on the floor, and grabbed 8 boards.

Among the notable players who missed action for the new-look Lakers are Kyle Kuzma, Jared Dudley and Troy Daniels. DeMarcus Cousins had a season-ending ACL injury while playing a pick-up game this summer.

Top overall draft pick Zion Williamson impressed yet again as the New Orleans Pelicans hacked out a close-call 127-125 win over Zach LaVine and the Chicago Bulls. Along with his explosive, high-leaping dunks, Zion showed his efficiency on the offensive end as he finished the game with a 12-13 clip from the field. The Duke standout had 29 points, 4 rebounds and 4 assists. Nickeil Alexander-Walker, another Pelican rookie, produced 13 points and 7 assists off the bench. Big man Jahlil Okafor and point guard Frank Jackson contributed 13 and 12 markers, respectively.

The Pelicans entered the fourth quarter trailing by 21 points. But the team’s second unit would clamp down on defense and won the final period on a 41-18 run. Pelicans head coach Alvin Gentry emphasized how proud he is of his boys’ job on defense in the closing quarter, as per the SB Nation.

“It speaks loudly about the depth that we have. For those guys to be able to come in...I thought that they did a good job. The thing that I was most impressed with was the defense. Obviously, we did not play very good defensively to that point.”

The Bulls got a solid outing from shooting guard Zach LaVine, who netted a team-high 28 points built on four makes from deep. Combo forward Otto Porter Jr had a near triple-double night of 16 points, 7 rebounds and 8 assists. Rookie Coby White added 13 markers, while third-year forward Lauri Markkanen put up 12 points and grabbed 4 boards.

With a 124-117 victory, Blake Griffin and the Detroit Pistons spoiled the debut of new Dallas Mavericks star big man Kristaps Porzingis. Griffin poured in 17 points and 5 rebounds for the Pistons, while sharpshooter Luke Kennard came off the bench to lead the team in scoring with 19 markers, including five made three-pointers. It was a total balanced offensive attack for the Pistons as seven players eclipsed double-digit scoring. Former MVP and three-time All-Star Derrick Rose showed off his skills in front of the Detroit home crowd as he contributed 18 points and 5 assists.

Pistons head coach Dwane Casey already likes what he sees from the partnership of Rose and Kennard on the team’s second unit, per Vince Ellis of the Detroit Free Press.

“When Derrick got tired of running pick-and-rolls, we went to Luke. Anytime you have multiple ballhandlers and pick-and-roll players, the way the game is played today, it's huge.

They can shoot it, it really gives you a different dimension and it helped us out. I think once they get to know each other and get a rhythm for each other, it's going to help us.”

For the Mavericks, this game was a trailer to their future. Although they lost, they still got great performances from Porzingis and sophomore playmaker and reigning Rookie of the Year Luka Doncic. Porzingis, who played his first NBA game since tearing his ACL a couple of seasons ago, wowed the crowd with 18 points and 7 rebounds. His offense from almost everywhere on the court, including nifty off-the-dribble pull-up jumpers and very deep three-pointers. Doncic topscored for the Mavericks with a do-it-all stat line of 21 points, 8 boards, 5 assists and 3 steals.

It may only be his first game with the Mavericks, but Porzingis already has a lofty goal in mind for his new team, per Doyle Rader of the Forbes.

“In our mind, we have to make the playoffs. That’s the goal for us. There is no other goal for us, just to make the playoffs as a team. We’re going to put in the work necessary to get to that point. The Western Conference is extremely tough. We already know that. We believe that with this group we’re capable of doing it.”

Sweet-shooting gunner Tim Hardaway Jr came off the bench to rack up 17 points, while Jalen Brunson contributed 11 markers and 3 assists.