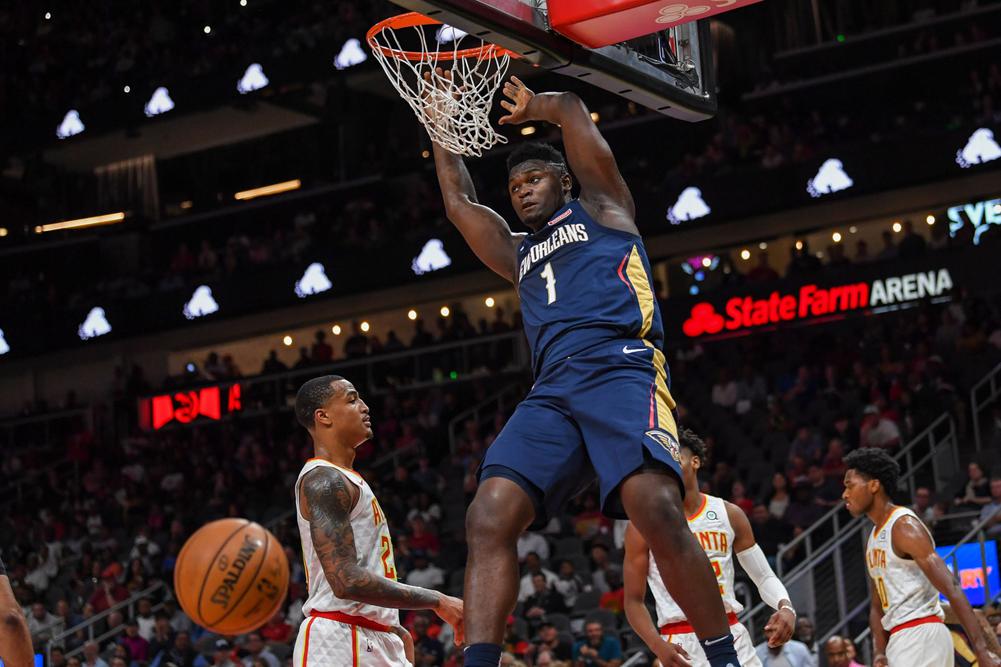 It was a successful debut for top draft pick Zion Williamson as the New Orleans Pelicans drubbed the Atlanta Hawks with a 133-109 victory. Williamson displayed the full repertoire with 16 points, 7 rebounds, 3 assists and 3 steals in 28 minutes of play. All-Star point guard Jrue Holiday topscored for the Pelicans with 21 points built on three makes from deep, while Brandon Ingram netted 19 points and 6 boards.

Although the Pelicans turned over the ball 20 times, it was also obvious that they are putting a premium on moving the ball. They had a total of 25 assists in the game, with newly-acquired playmaker Lonzo Ball accounting for a team-high 7 dishes. Ball, who had all his 9 points from three-point land, emphasizes how the team’s unselfish attitude translated to their winning performance, per Christian Rivas of USA TODAY Sports’ Lonzo Wire.

“We have a lot of guys that know how to play basketball. I can’t really think of anybody that’s selfish on the team. I haven’t seen any selfish attitudes since I’ve been here, so I think that translated into the game and people saw that.”

That unselfish team attitude will certainly go a long way in building a solid chemistry between the new teammates. Holiday has now emerged as the main man for the Pelicans following the blockbuster trade that sent superstar big man Anthony Davis to the Los Angeles Lakers. Holiday is the lone holdover of last year’s starting line-up, with Ball, Ingram, Williamson and former Utah Jazz power forward Derrick Favors given the new starting roles.

Rookies Nicolo Melli and Nickeil Alexander-Walker also had solid contributions off the bench for the Pelicans. Melli, a 28-year old stretch big, actually tried out his luck during the 2013 NBA Draft but was not given a break. But his fine play throughout his EuroLeague career caught the eyes of the Pelicans front office, who signed him to a contract this summer. Against the Hawks, Melli racked up an all-around stat line of 11 points, 8 rebounds, 4 assists and 2 steals. Alexander-Walker, the team’s 17th pick in the recent draft, contributed 12 points on two three-pointers.

DeAndre’ Bembry amassed a team-high 16 points for the Hawks, while young budding star forward John Collins had 13 points and 5 rebounds. Trae Young, the team’s impressive sophomore point guard, struggled with 8 turnovers but almost had a double-double game of 9 points and 11 assists. Despite the loss, the Hawks still saw their rookies ball out. Cameron Reddish made three of his four three-pointers, while De’Andre Hunter came up with a stat line of 10 points, 2 boards and 2 assists.

Meanwhile in Japan, the Toronto Raptors leaned on young star Pascal Siakam as they hacked out a 134-129 win over James Harden and the Houston Rockets. Siakam impressed with a double-double game of 24 points, 11 rebounds and 5 assists. Serge Ibaka contributed 18 points while point guard Fred VanVleet had an all-around performance of 16 points, 5 boards and 5 assists.

The Raptors played without two of its All-Stars in Marc Gasol and Kyle Lowry. Lowry, who recently signed a one-year, $31 million extension with the team, is still recovering from the thumb surgery he went through this summer. Raptors coaching staff also opted to give Gasol a rest. The veteran Spaniard center is coming off a successful championship run during Spain’s World Cup campaign last September.

Harden again stole the spotlight in front of the Japanese crowd, putting up 34 points on four three-pointers. Eric Gordon also came up with four makes from beyond the arc, and Clint Capela logged in with 12 points and 6 boards.

But the most exciting sight to see in this game was Russell Westbrook’s first game with the Rockets. The former MVP produced 13 points and 6 assists in his Rockets debut, while shooting a 4-10 clip from the field. The superstar point guard says that he and his teammates have a lot of work to do in terms of the rhythm of their offense, per ESPN.

"It wasn't bad. Unfortunately, we didn't win. That's the main goal. But it was good to get on the floor for the first time, get up and down, try to find a rhythm. We've got a lot of work to do."

A couple of new faces also showed out for Houston. Wing gunner Ben McLemore knocked down two three-pointers on his way to 10 points, while veteran defensive stalwart Thabo Sefolosha contributed 10 points and 2 steals. Among the notable names who didn’t see action for the Rockets are Tyson Chandler, Gerald Green, Danuel House Jr and Nene Hilario.

The New York Knicks got off to a fresh, successful start as they beat the Washington Wizards, 104-99. Prized rookie RJ Barrett totalled 17 points on an efficient 6-13 shooting, while also grabbing 7 boards and dishing off 3 assists. Newly-acquired forward Julius Randle, who is expected to take the star role for the retooled Knicks, displayed his versatility with 11 points, 7 rebounds and 7 assists.

Knicks head coach David Fizdale points out his rookie’s confidence as a bright spot in the game, per Marc Berman of the New York Post.

“That’s a player. When you got a guy who really has belief in himself and doesn’t lose confidence or waver, he’s always engaged in the game. He always feels he has a chance to get it going.”

After a very quiet first half that saw him only put up 3 points, Barrett would torch the opposition with 14 points in the second half. Taj Gibson led the Knicks’ second unit with 16 points and 9 boards.

The Wizards also saw their top rookie make his debut as Rui Hachimura netted 12 points and 4 boards. Young center Thomas Bryant had a double-double performance of 14 points and 14 rebounds, but All-Star shooting guard Bradley Beal struggled with only 5 points on a measly 2-10 shooting from the field.