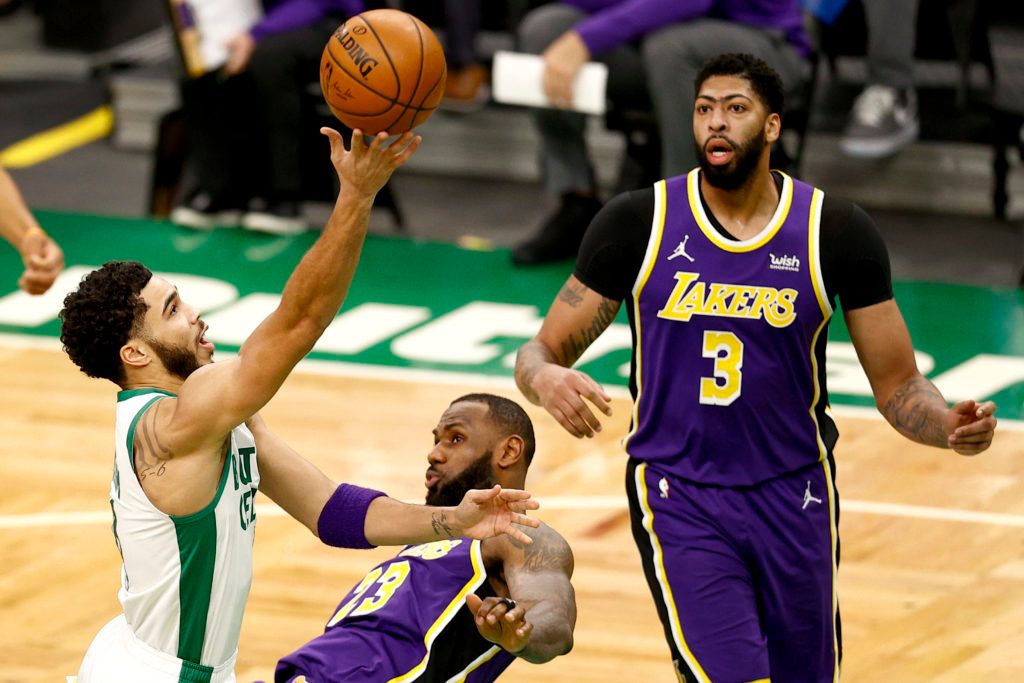 Lakers gets past Celtics in low-scoring affair

Rivalry was renewed when the Los Angeles Lakers barely got past the Boston Celtics via a 96-95 victory. Superstar big man Anthony Davis came through with a double-double performance of 27 points and 14 rebounds, while LeBron James chipped in an all-around outing of 21 points, 7 boards and 7 dimes.

Montrezl Harrell was also a big factor off the bench as he provided his usual high energy and impact on both ends of the floor. The reigning Sixth Man of the Year tallied 16 points, 5 rebounds, 2 steals and 3 blocks as he led the Lakers’ second unit in the win.

But it was the less-heralded Alex Caruso who came through when the Lakers needed him the most. The defense and the intangibles that he brings to the table are of utmost value to the team, especially in that sequence in the dying seconds that showed just how important he is to the Lakers’ bid to defend their championship.

Caruso forced the Celtics to a broken play in the last possession that caused Kemba Walker to put up a tough, contested step-back jumper that ultimately missed the mark. As per Dave McMenamin of ESPN, Caruso emphasized that his competitiveness on the defensive end helps him carve a niche in this championship squad.

"Once the ball popped up in the air, regardless if we were going to get  it back or not, I was kind of making my way back on defense just because     that's kind of what we teach ourselves to do.

Jayson Tatum and Jaylen Brown combined for 58 points in the loss. Walker, who missed that potential game-winner, only produced four points, missed all of his five attempts from the three-point line, and made only one of his twelve total field goals in the tightly-contested game.

It was another lowly performance for Kemba, who is struggling mightily in his return to the Celtics’ active line up. Still, the All-Star point guard is not losing confidence in these tough times. While it is true that he needs to be more consistent with his individual performance, Kemba assured everyone that he will be more focused and locked in than he was during the disappointing loss to the Lakers. (as per SB Nation’sCeltics Blog)

“It’s more mental than anything, I think. I’m trying my hardest just not         to get frustrated. I got frustrated tonight at myself and it kind of put  me in a bad place,” Walker said of his off night. “And you know I’m not a  player like that to really get frustrated. You know, I’m always smiling      and I wasn’t that tonight. I got into my own head and mentally, I hurt  myself.

I can’t do that for this team, These guys, they look to me. Especially when things are going tough. These guys look at me. I can’t put my head          down and be not mentally engaged in the game like I was tonight.”

Walker has just played six games this season after recovering from an injury. He is still on a minutes restriction program that is causing him to log in only 24.8 minutes per contest. Kemba obviously needs more time to get into his groove, and get into optimum shape for the games.

Walker is just norming a 37%  overall clip from the field, including a measly 29%  from beyond the arc. He is averaging only 14.3 points per game, his lowest output since his rookie year with the Charlotte Hornets. It is fortunate that Brown and Tatum have been holding the fort for the Celtics, but there is no doubt that the team will need Walker’s brilliance especially come playoff time.

Still, Celtics head coach Brad Stevens reiterated that they are staying committed to Walker and that they will continue to play through him. As per Tom Westerholm of Boston.com, Stevens emphasized that Kemba has always been making himself accountable in leading this team.

“Kemba has such a wonderful way about and is such the greatest        teammate,” Stevens said. “And he puts a lot of pressure on himself to be    really good, and I think that tonight they put a lot of attention on him, they had a huge presence on him, and it just wasn’t his night.

We’re riding Kemba,” Stevens said. “He’s a really good player who really      cares about his team and really wants to be a part of something special    with guys that are going to give for each other. And sometimes it’s not     your night. But more often than not, it is his night. And we believe               strongly in that.”

The Celtics are currently sporting a 10-8 record in the Eastern Conference, good enough to sit in the fifth spot. Their next assignment will be an exciting showdown against Stephen Curry and the Golden State Warriors, a powerhouse match-up that could be the barometer of where they are standing right now in the NBA’s hierarchy of elite championship-contending squads.

Jimmy Butler made a triumphant return as he helped the Miami Heat snap their losing skid and carve a 105-104 win over the Sacramento Kings. Butler amassed a tremendous night of 30 points, 7 rebounds and 8 assists, while All-Star big man Bam Adebayo stuffed the stat sheet with his 18 points, 13 rebounds, 4 assists, 2 steals and 1 block.

It was a much-needed win for the Heat, who are having a disappointing start to the season. The win improves them to a record of seven wins against twelve losses, but they are still sitting way below the 8th spot in the East.

The return of Butler could signal the start of something new for the Heat. They are coming off an excellent run last season when they made it all the way to the NBA Finals. They may not have succeeded in defeating LeBron James and the Los Angeles Lakers, but that outstanding campaign showed how bright the future is in South Beach.

But they are having a mediocre start to the season, and a huge part of that disappointment is Butler’s absence. The five-time All-Star forward has only appeared in seven games this season. He is still trying to whip himself up into game shape, but this recent 30-point outburst should be a sign that he will be achieving that goal soon.

He’s a big part of this team,” Dragic said. “He’s our leader. We follow him.   It takes time to get back into rhythm. I feel like [Monday’s] going to be completely different. I know that he’s going to bounce back. When he’s playing well, everybody follows.”

The Heat will try to get a winning streak going when they go up against rookie LaMelo Ball and the Charlotte Hornets in their next assignment.