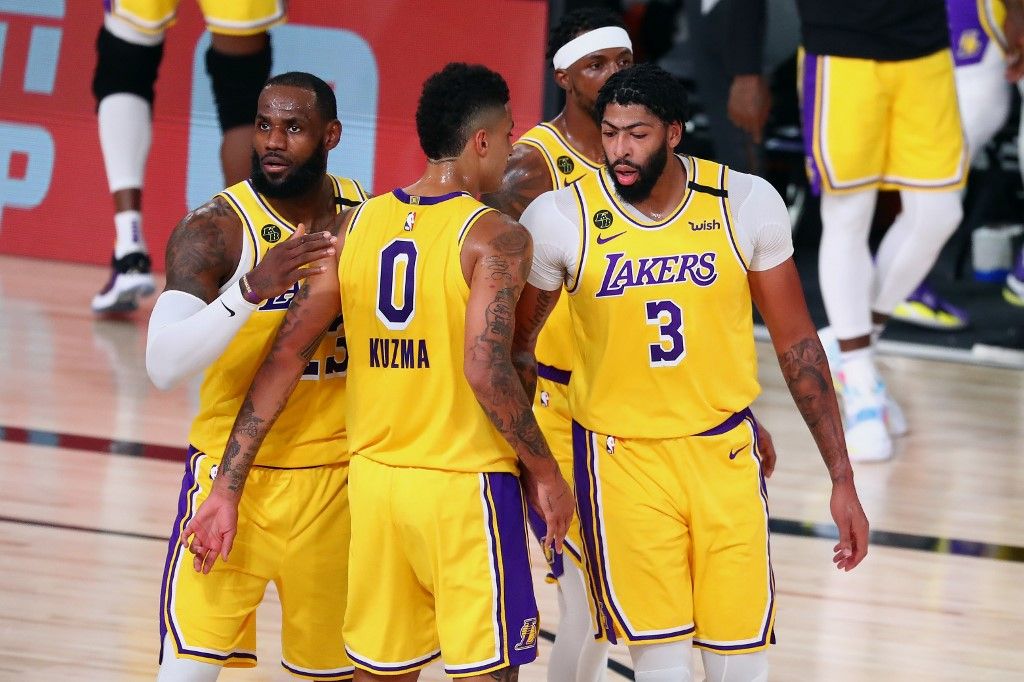 Anthony Davis was disappointed with his performance in Game 1, but he bounced back big time on Thursday to lead the Los Angeles Lakers to a 111-88 win over the Portland Trail Blazers. The win helped the Lakers avoid getting into a 0-2 hole against the red-hot Trail Blazers in their first-round playoff series inside the NBA bubble in Orlando, Florida.

Davis finished with 31 points on 13-for-21 shooting from the field, including a 3-for-4 clip from beyond the arc. He also posted 11 rebounds, three assist, a steal, and a block. The 27-year-old power forward admitted after the match that he was hard on himself when he shot just 8-for-24 in Game 1 but revealed that superstar teammate LeBron James helped him recover from the bad night that he had on Tuesday.

"I didn't feel like I performed to the level I needed to," Davis said of his Game 1 performance via ESPN. "And he let me have my moment and kind of get on myself, and then he talked to me and said I was fine. He said it's one game, and as a guy who's won multiple championships and been in these situations before, he knows what to expect. He knew what to expect from his teammates and he kind of just was there for me to kind of encourage me."

For his part, James did not need to do a lot for the Lakers on Thursday, as he finished with just 10 points on 4-for-11 shooting to go along with seven assists and six rebounds. The four-time NBA Most Valuable Player let his teammates take the spotlight, particularly Davis, who received praises from James for his aggressiveness right from the get go.

"He was just aggressive," James said of Davis via Los Angeles Times. "From the beginning of the game, wasn’t passive at all looking for his shots. There were some that he missed early and he continued to look for his shot and he did a great job of offensive rebounding as well, getting some put backs in that fashion."

Kentavious Caldwell-Pope also turned the tables around on Thursday, proving a huge lift for Los Angeles. After scoring just a point in Game 1, the veteran forward finished with 16 points on 5-for-8 shooting from the field, including a 4-for-6 clip from the three-point region. JaVale McGee also had a big impact with 10 points and eight boards, while JR Smith chipped in 11 points with three three-pointers.

Damian Lillard led the Trail Blazers in scoring again with 18 points but he was far from the form that he showed in the seeding games and the series-opener with the Lakers. The superstar point guard shot just 6-for-14 from the field, making just one of his seven attempts from downtown. Lillard also exited in the third period after sustaining a dislocated finger, which he thinks might affect him in Game 3.

CJ McCollum had 13 points and five rebounds for the Blazers, while Anfernee Simmons added 11 points in 15 minutes. Veteran forward Carmelo Anthony also had a rough night with just two points in 27 minutes for Portland, who will look to bounce back on Saturday.

The Milwaukee Bucks also evened their series with the Orlando Magic after cruising to a 111-96 victory on Thursday. The Bucks looked like the team that ended up with the best regular season record in Game 2, recovering from their stunning loss to the eighth-seeded Magic on Tuesday.

Giannis Antetokounmpo, who said on Tuesday that they need to work harder, let his game do the talking. The reigning NBA Most Valuable Player posted 28 points and 20 rebounds to go along with five assists in 32 minutes. The superstar forward also lauded his team's effort, showing sense of urgency to avoid falling into a deep hole.

"You've got to understand, you don't want to be down 2-0," Antetokounmpo said via ESPN. " We can still get back, but you don't want to put yourself in that position, especially early in the playoffs. We knew that we had to come out and just play hard, try to get a win; and as a team, we knew for us to get a win we gotta play hard."

Antetokounmpo also revealed that Bucks head coach Mike Budenholzer prepared them well mentally, revealing that they were asked to impose their will on defense. The Bucks responded to Budenholzer's challenge right from the opening tip, limiting the Magic to just 13 in the opening period. The Bucks led by as 23 points in the first half and halted a comeback attempt from Orlando in the second half en route to the series-tying victory.

Pat Connaughton had a great night off the bench for Milwaukee, finishing with 15 points and 11 rebounds to go along with three assists and two blocks. Brook Lopez also did a lot of damage with 20 points on 8-for-12 shooting with four three-pointers, while Eric Bledsoe and Donte DiVincenzo added 13 and 11 points, respectively.

Nikola Vucevic paced the Magic with 32 points and 10 rebounds in 35 minutes. Evan Fournier and Terrence Ross scored 12 points each, while Markelle Fultz and DJ Augustin chipped in 11 and 10 points, respectively, for the Magic, who shot just 34.8 percent from the field as they struggled to adjust to Milwaukee's defensive intensity.

"We've got to get the ball moving," Magic head coach Steve Cliffordsaid after the game. "We didn't do that early. We did miss some shots. But definitely, their ball pressure, they were into us more, and it definitely impacted the way we played offense."

Orlando played without key players Aaron Gordon and Michael Carter-Williams, who are both out with injuries. It remains to be seen whether or not they will be available in Game 3 on Saturday.

The Houston Rockets now hold a 2-0 lead against the Oklahoma City Thunder after scoring a 111-98 win in Game 2 of their first-round series on Thursday. James Harden led the Rockets in scoring with 21 points, but the Rockets made the biggest run of the game when he was resting on the bench.

The Thunder was still ahead 80-77 early in the fourth quarter, but Rockets unleashed a 17-0 run behind their supporting casts to take control of the match. The Thunder failed to recover and now found themselves in a must-win situation in Game 3 on Saturday.

"Unbelievable, man," Harden said of the team's big run in the fourth quarter. "That was the game right there. The guys just took it upon themselves to guard and we felt in the sense Oklahoma City was getting tired and we just kept pressing the gas on them."

Shai Gilgeous-Alexander scored 31 points for the Thunder, while Danilo Gallinari tallied 17 points and five boards. Chris Paul had 14 points and six rebounds but admitted that he should do more if he wants to lead his team to a victory against the hot-shooting Rockets, who are still playing without injured star Russell Westbrook.

In the Eastern Conference, the Miami Heat also took a 2-0 lead in their first-round series against the Indiana Pacers with a 109-100 victory. Duncan Robinson bounced back from a poor shooting night in Game 1 to finish with 24 points on 7-for-8 shooting from beyond the arc.

"Just felt a better rhythm in this one for whatever reason," Robinson, who finished with only six points on 2-for-8 shooting in Game 1, said of his performance. "But that can't be the case for me. I got to kind of assert myself and not just have the game necessarily come to me, but be more aggressive. So I thought that was big and then obviously you see some go early, the hoop starts to look a little bigger."

As a team, the Heat shot an impressive 18-for-35 from the three-point range. Their 18 three-pointers set a new team record for three-pointers made in a playoff game. The Heat will look to sustain the momentum in Game 3 of the series on Saturday.