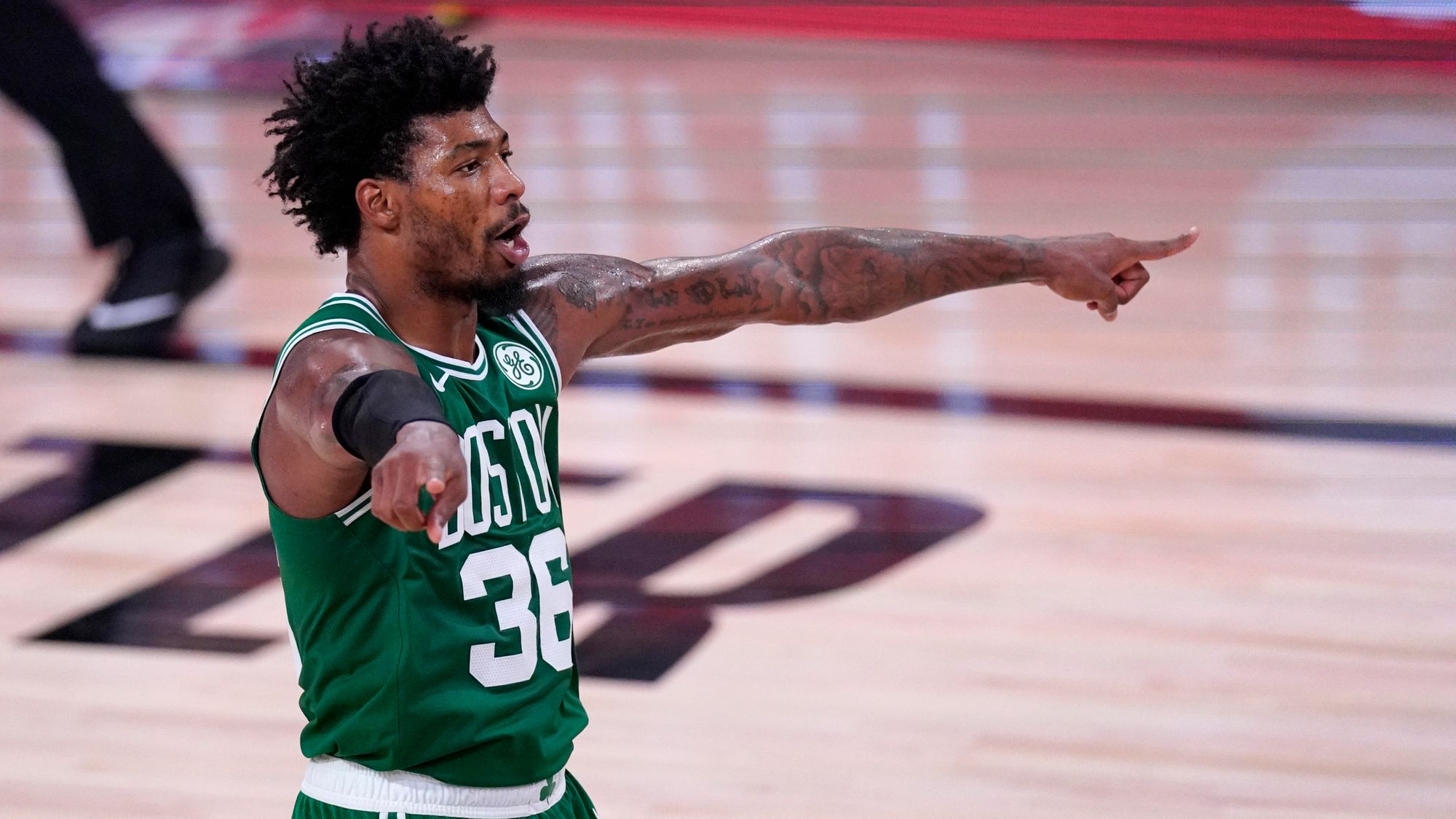 The Boston Celtics avoided falling into a deep hole after bouncing back in Game 3 to make the series more interesting. Boston prevented another late meltdown to take a 117-106 win over the Miami Heat in the 2020 Eastern Conference Finals to take their first victory in the series.

"There's some great guys in that locker room," Brown said after the game via ESPN.  "A lot of emotion, a lot of passion, but we're a family and we're here for each other at the end of the day. We exemplified that when we came out together ... we kept our will   high and we persevered to win this game."

The Celtics had another strong start in Game 3 -- similar to how they started the first two games of the series. Boston took a nine-point lead after the first quarter, which ballooned to 13 points at the half. But after surrendering double-digit leads in the first two games, the Celtics played with a lot of composure on Saturday.

Boston led by as much as 20 points at the 7:13 mark of the game. Miami tried to mount another monumental comeback late in the fourth quarter when they pulled within seven points with almost a minute left to play in the game. However, the Celtics managed to hold on to their lead this time and made the series more interesting.

The win came after the Celtics made headlines because of heated moments in the locker room after their Game 2 loss. Tatum said that the verbal arguments after the previous game is not a big deal because it just showed that they are determined to win and it showed in Game 3, as they limited the Heat to 38.8 percent shooting from the field.

"Anybody that's played sports, played in a team game, we're not supposed to be happy being down 0-2. If you are, then you don't care. We care about this," Tatum said. "Basketball is a game of emotions. So we want guys to be frustrated, be upset, to care. It's nothing personal. We just have to figure some things out. It's nothing more than that. You're supposed to talk it out, figure it out and come together for the next game."

The Celtics also got a much-needed boost with the return of veteran forward Gordon Hayward, who has not played since suffering a Grade 3 right ankle sprain in the opening round of the 2020 NBA Playoffs against the Philadelphia 76ers. The 30-year-old forward played 31 minutes off the bench, finishing with six points, five rebounds, four assists, and three steals for the Celtics.

"It meant everything," Tatum said of Hayward's return, which helped them go with their usual rotation. "Obviously, we played a while without him. And I've said it before: crazy that anyone would think we're better without him. We're so much better when he's out there and so much more dynamic, so much more versatile when he's out there. It felt great to have the full team back. He played great in his first game, and he's going to continue to get better."

Bam Adebayo led the Heat, posting a double-double with 27 points and 16 rebounds to go along with three steals and two blocks. Tyler Herro came off the bench and contributed 22 points, while Jimmy Butler tallied 17 points and eight rebounds on top of three assists and two blocks. Duncan Robinson added 13 points, while Goran Dragic struggled with just 11 points on 2-for-10 shooting from the field.

"We didn't play hard enough," Butler said. "I think we didn't do anything that we   said that we were going to do. We knew how they were going to attack us. We weren't helping each other. We weren't making an extra pass a lot of the times. We have to play basketball the way we have been playing the games that we have been winnig. We understand that. There's nothing that Coach can say."

The Heat will have more time to regroup, as the series will have a three-day hiatus. Boston and Miami will collide again in Game 4 on Wednesday.

Los Angeles Lakers superstar LeBron James did not hide his frustrations over the result of the NBA Most Valuable Player voting this year. James finished second to Milwaukee Bucks superstar Giannis Antetokounmpo for the coveted award, but the four-time NBA MVP felt that he deserved more vote.

James, who averaged 25.3 points on top of 10.2 assists and 7.8 rebounds in his 17th season in the league, admitted that he was "pissed off" when he learned that he only got 16 first-place votes in the MVP balloting. The 35-year-old superstar garnered 753 total points, while Antetokounmpo, who received the other 85 first-place votes, earned 962 points to win his second consecutive MVP plum.

"It pissed me off, because out of 101 votes, I got 16 first-place votes," James said via ESPN. "That's what pissed me off more than anything. You know, not saying that the winner wasn't deserving of the MVP. But that pissed me off. And I finished second a lot in my career, either from a championship, and now four times as an MVP."

James reiterated that he is not after the award because his main goal is to get better every single day, but he lamented the things that are out of his control. The three-time NBA champion said that he is unsure how the panel of 100 media members are deciding on how to pick as the award winner because of the unclear criteria for voting.

Lakers teammate Anthony Davis also gave his take on the result of the race. Like some of his fellow superstars, Davis felt that James deserved it more because of what he has accomplished this season. James led the league in assist with 10.2 dimes per game and finished 12 in scoring this season.

Lakers head coach Frank Vogel also did not hide his feelings, saying that James is the MVP this season. The 16-time NBA All-Star helped the Lakers end their six-year playoff drought just in his second season in Los Angeles. The Lakers also finished with the best record in the league and are currently playing in the Western Conference Finals for the first time since the 2010 NBA Playoffs.

"To me, he’s the MVP of the league this year," Vogel said on the result of the MVP voting via Los Angeles Times. "What LeBron does for our team to me is unparalleled, to carry the threat of going for 40 at any point but leading the league in assists and quarterbacking our defense and driving our team to as many wins as we’ve had and our playoff success, to me he’s our MVP."

But despite being frustrated of the balloting, James reiterated that he is over it and appealed to the media to not get his "pissed off" statement overblown. He said that is currently focused on helping the Lakers reach the NBA Finals this season. They currently hold a 2-0 lead in the Western Conference Finals against the Denver Nuggets.

Davis feels that the result of the MVP race will just add fuel to the fire for James in his quest to win his fourth NBA championship this season. The Lakers are now considered as the favorites to win the title after previous title favorites Los Angeles Clippers and Milwaukee Bucks were both booted out in the second round of the 2020 NBA Playoffs.

"It definitely sparks him and like he’s got a chip on his shoulder, like he’s got something to prove," Davis said of James, who is averaging 25.6 points, 10.0 rebounds, and 8.7 assists in the playoffs. "So we see it, and he knows it, and the team knows it, and we know he’s going to show it."