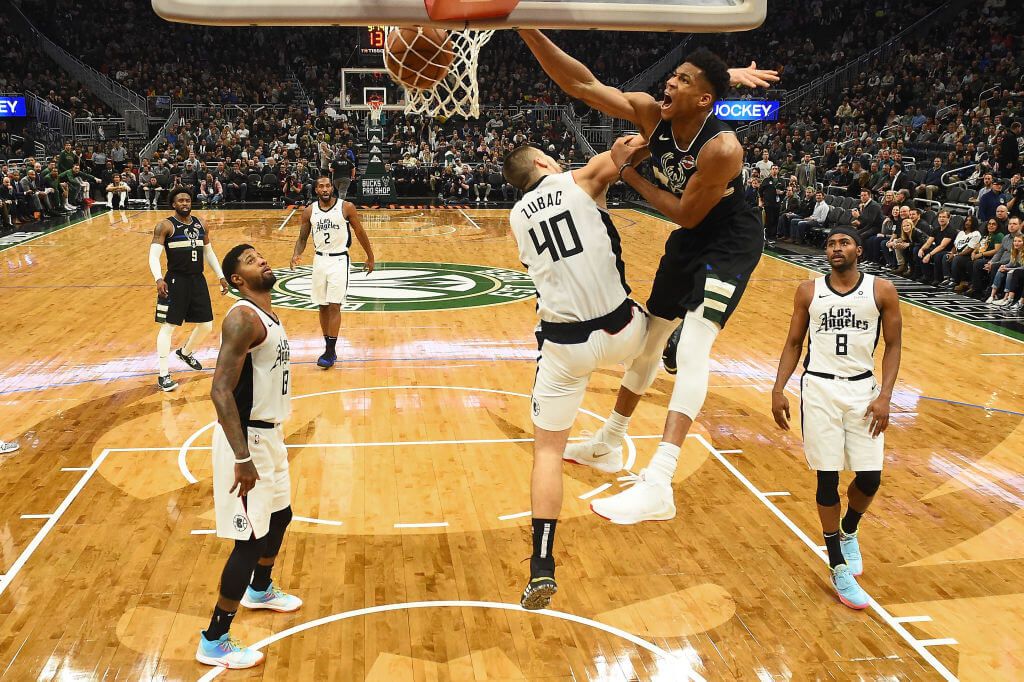 The Milwaukee Bucks set the tone right from the start and never looked back as they defeated the Los Angeles Clippers with a convincing 119-91 win. Giannis Antetokounmpo led all scorers with 27 points, on top of 11 rebounds and 4 assists. All-Star swingman Khris Middleton poured in 17 markes, while making all of his three attempts from beyond the arc. Pat Connaughton and Ersan Ilyasova both came off the bench to chip in 13 points apiece as the Bucks notch their 20th win of the young season.

In a highly-anticipated game between two elite squads, it was the Bucks who set the dominant defensive tone right from the opening buzzer. They held the Clippers to just 15 total points in the first quarter, and then limited them below the 20-point mark in the third period. The Bucks were very active in playing the passing lanes as they forced the Clippers to 21 turnovers, with superstars Kawhi Leonard and Paul George accounting for five miscues apiece.

Now winners of 14 straight games, the reigning MVP isn’t bent on getting satisfied. Antetokounmpo emphasized the importance of getting better as a team, as per Malika Andrews of the ESPN.

"We got to keep learning and keep getting better. Keep going out there playing hard. Doesn't matter if you have two wins in a row, 14 wins in a row. We just got to keep playing together and keep being humble."

For the Clippers, it was a rough outing for their two top stars. Leonard and George struggled in taking care of the ball on offense, and only put up 17 and 13 points, respectively. Young big man Ivica Zubac produced a double-double outing of 13 points and 12 boards, while Lou Williams and Montrezl Harrell both had 11 markers off the bench.

Williams, the reigning Sixth Man of the Year, said that the Bucks simply wanted the win more, per Broderick Turner of the Los Angeles Times.

The loss means that the Clippers have absorbed a winless head-to-head series with the Bucks this season. The Clips will just have a day of rest before they embark on a back-to-back road trip against the Washington Wizards and the Indiana Pacers.

The Miami Heat relied on a balanced offensive attack as they netted a 112-103 victory over the visiting Washington Wizards. Jimmy Butler amassed yet another triple-double stat line of 28 points, 11 rebounds, 11 assists and 2 blocks. It marked Butler’s second triple-dub this season, after also achieving the feat during a morale-boosting victory over the Toronto Raptors last Tuesday. Young budding center Bam Adebayo also showed out, finishing with 24 points, 14 boards, 4 assists and 2 blocks. Rookie shooting guard Tyler Herro bounced back from a forgettable string of games, netting 22 markers off the bench in the Heat’s 16th win in 22 games this year.

The Heat actually found themselves trailing the Wizards entering the second half of the game. But they turned on the switch on the defensive end, limiting Washington to just 20 points in the third quarter and only 18 markers in the payoff period. It was a tough test for the Heat, who missed the services of their second unit’s key cogs, Goran Dragic and Justise Winslow.

As for the Wizards, this was still a good effort game during the second leg of their back-to-back schedule. They just dismantled a very strong Philadelphia 76ers squad the night before, but still had the energy to start the game strong only to lose steam in the second half.

Star Bradley Beal led the charge for the Wizards with 23 points and 8 assists, while stretch big men Davis Bertans and Moe Wagner chipped in 19 markers apiece. Veteran point guard Ish Smith contributed 15 points and 8 dimes, and rookie forward Rui Hachimura totalled 14 markers. Despite the disappointing loss, Wizards head coach Scott Brooks credited his wards for showing up big time in the second game of their back-to-back schedule, as per Jackson Filyo of WashingtonWizards.com.

“I loved the way we played tonight. It’s one of the toughest back-to-backs in the East. Playing Philadelphia, then the long flight down to Miami to play a good, physical, talented, aggressive and tough basketball team. We competed, there’s nothing to be ashamed of. We ran out of gas a little bit. I thought we had some good looks in the second half but we competed and gave great effort.”

However, the road gets much harder for the Wizards as they go back home to host Kawhi Leonard, Paul George and the Los Angeles Clippers on Sunday.

Celtics cruise to an easy win over Jokic and Nuggets

In one of their most important match-ups of the regular season, the Boston Celtics did their assignment and took down Nikola Jokic and the Denver Nuggets, 108-95. Third-year forward Jayson Tatum continued his consistent scoring with 26 points and 7 boards, co-starring with swingman Jaylen Brown, who chipped in 21 markers. Star point guard Kemba Walker contributed 19 points on three hits from three-point territory, helping Boston run away with their third consecutive win.

The Celtics took an early lead in the opening period, and never looked back from there. Their defense during the second and third quarters were masterful, and it was in the third canto that they broke the game open.

“They are very physical, very aggressive, and I think they are guys who wanted to continue to protect their own court, but also exact some revenge from our place a week and a half ago. They made us feel them all night long.”

Nikola Jokic produced his best scoring night of the season, tallying 30 points, 10 boards, 4 assists and 2 blocks. But he was all that the Nuggets had in the loss as the only other player on the team who put up double-digit points was Jamal Murray’s 10 markers. Still, it was on defense that Malone was more concerned about, singling out the Celtics’ young impressive duo’s performances, per Eric Spyropoulos of NBA.com.

"Jayson Tatum and Jaylen Brown had great nights, and we obviously didn't do a good enough job guarding them. Those guys are both talented players. They can beat you in the post, hit the 3-point shot and have the ability to break you down on the dribble."

Denver will try to bounce back from this defeat when they travel to Brooklyn to go up against Spencer Dinwiddie and the Nets on Sunday.