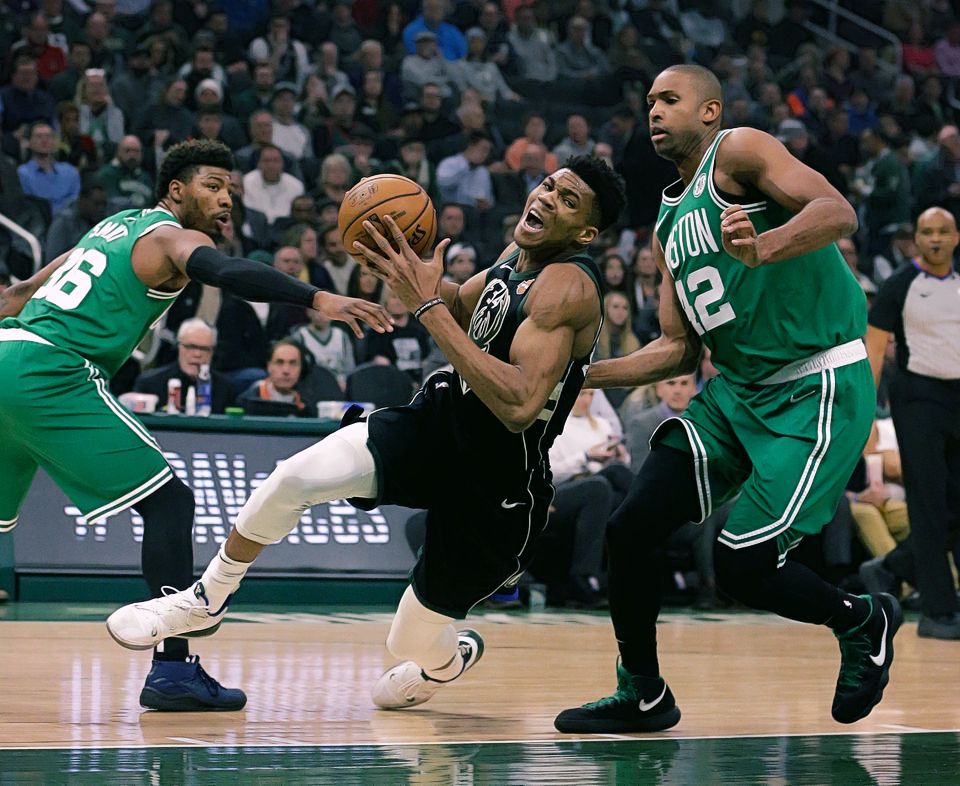 Two Eastern Conference powerhouse teams lived up to the hype as the Milwaukee Bucks carved a close-call 98-97 win over the visiting Boston Celtics. Giannis Antetokounmpo again shone the brightest as he finished with 30 points, 13 boards, 6 assists and 2 blocks in the victory. It was a heavy-contested game throughout with the Celtics coming back from a nine-point deficit in the fourth quarter to tie the game at 95 in the waning seconds. Bucks All-Star shooting guard Khris Middleton would answer back with his own three-pointer at the top of the key on the other end, giving the home team a precarious three-point lead. Celtics star point guard Kyrie Irving would convert on a quick lay-up on the other end, before Marcus Smart forced Giannis into a jump-ball situation. The Greek Freak won the jump but the Bucks were hit with a shot clock violation. With a solid opportunity to steal the game, Kyrie drove to the lane and missed a difficult floater, giving Milwaukee their 44th victory of the season.

Al Horford led Boston with an impressive double-double night of 21 points, 17 rebounds, 5 assists and 3 blocks. Irving chipped in 22 markers as the Celtics fell to a 37-22 record, dropping them to 5th in the East.

Playing without All-Star big man Joel Embiid, the Philadelphia 76ers turned to their newest star, Tobias Harris, to defeat Dwyane Wade and the Miami Heat, 106-102. Harris completed a double-double of 23 points and 11 boards, while fellow ex-Clipper Boban Marjanovic dominated inside with 19 markers and 12 rebounds. It appeared that the Heat would steal this road win as Wade came up clutch in regulation, making two consecutive shots to put the Heat up by one with a little above a minute left. But Miami would fail to make defensive stops on the other end, as a JJ Redick three-pointer iced the game, giving the Sixers enough cushion to hold off the visiting team. Sixers All-Star point forward Ben Simmons displayed his usual consistent form as he finished with 21 points, 7 rebounds and 4 assists.

Wade topscored for the Heat as he tallied 19 points, 6 assists and 4 boards in the loss, while Dion Waiters contributed 18 points, 5 rebounds and 3 steals. The loss drops Miami to 10th in the East, a half-game behind 8th-ranked Detroit Pistons. On the other side, the Sixers gain the upper hand in the standings, earning solo 4th place with the victory.

Curry heats up for 36 as Warriors escape Kings

Stephen Curry and the Golden State Warriors endured a tough test to start their stretch run to the playoffs as they hacked out a hard-earned 125-123 victory over the impressive Sacramento Kings. Curry shot the lights out from deep with 10 three-pointers on his way to putting up 36 points, 7 assists and 6 rebounds for the defending champs. Kevin Durant tied his career-high in blocks with 7, on top of scattering 28 points and 9 rebounds. The Warriors appeared to have the game under wraps in the waning seconds, but Kings shooting guard Buddy Hield refused to cower as he made two consecutive three-pointers before Warriors veteran forward Andre Iguodala missed two free throws on the other end. Head coach Dave Joerger drew up a play off a timeout, but Hield passed up an open three-pointer at the top of the key and then missed a potential game-tying turnaround jumper at the lane.

Hield finished with 19 points in the loss, but it was Marvin Bagley III who starred for Sacramento, finishing with 28 points and 14 rebounds. The loss puts the Kings to 1.5 games behind the Western Conference’s 8th spot, while the Warriors solidify their hold on the top spot with the win.

The Los Angeles Lakers clamped down on defense in the fourth quarter as they beat James Harden and the Houston Rockets, 111-106. LeBron James led the home team as he tallied 29 points, 11 rebounds and 6 assists, while Brandon Ingram made clutch plays in regulation and finished with a double-double of 27 points and 13 boards. The Lakers looked pale and unmotivated in the first half, but woke up just at the right time in the final period, holding the offensive-powered Rockets to just 16 points in the quarter. Rockets MVP candidate James Harden continued his consecutive 30-point streak, but had 8 turnovers and fouled out in the crucial minutes of the game.

All-Star point guard Chris Paul flirted with a triple-double of 23 points, 10 rebounds and 9 assists in the loss, while young budding center Clint Capela had 12 markers and 11 boards in his return from more than month of lay-off due to an injury. It was a much-needed win for the Lakers moving forward, as they improved to a 29-29 record, just 2.5 games behind the Los Angeles Clippers for the last playoff spot in the West.