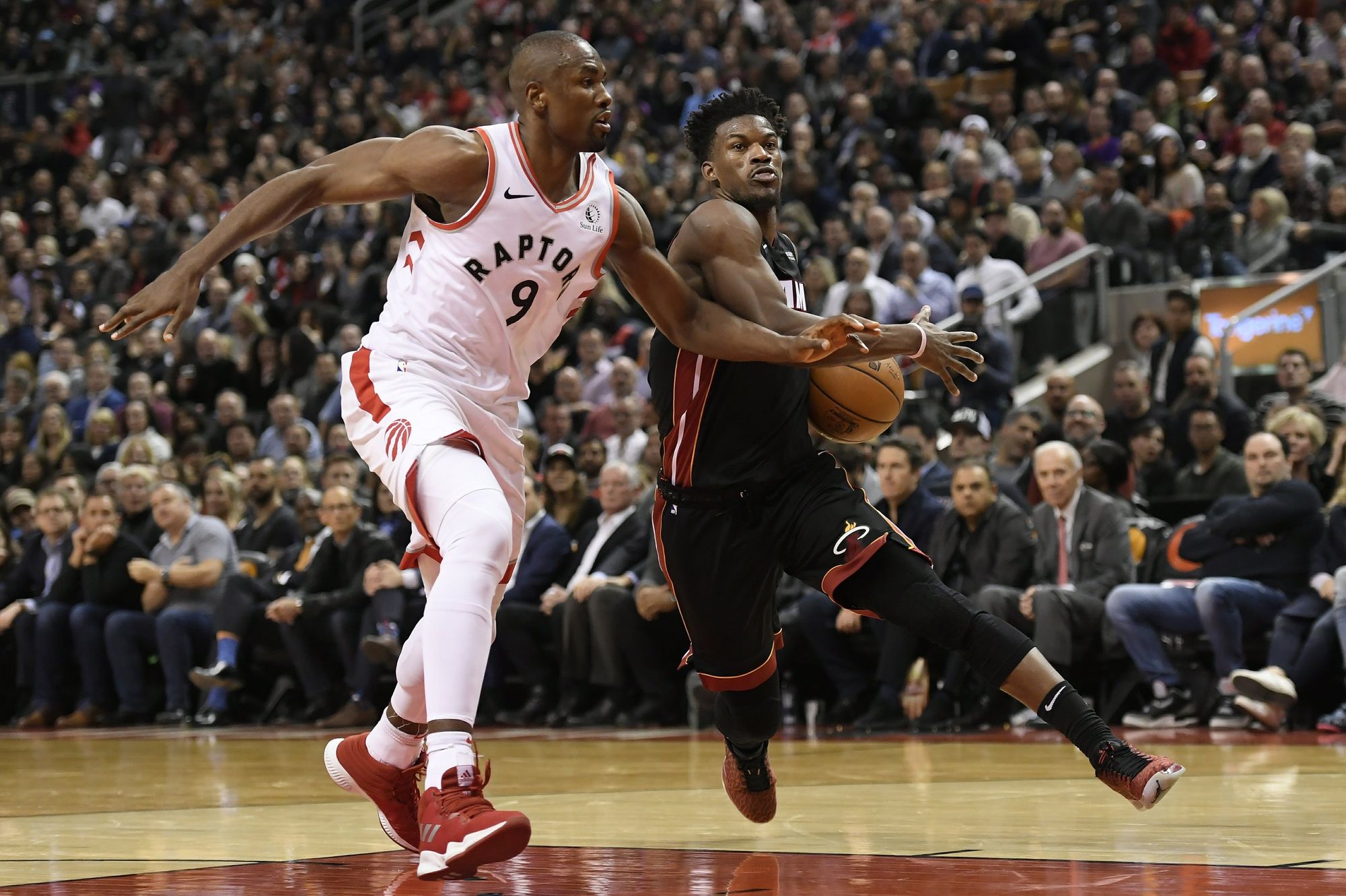 The Miami Heat banked on the heroics of two-way superstar Jimmy Butler as they earned a hard-fought 121-110 win over the Toronto Raptors. Butler put up a triple-double stat line of 22 points, 13 rebounds and 12 assists, including a number of clutch baskets in regulation and during the overtime period. Duncan Robinson hit six treys on his way to 22 markers, while Justise Winslow came off the bench to tally 17 points and 9 boards.

It was a tremendous character win for the Heat, and a statement performance for Butler. Instead of licking their wounds after seeing their seven-point lead vanish in the fourth quarter’s final two minutes, the Heat maintained their composure at the end. Butler would go on to score eight consecutive points in the opening minute of overtime, while also making a couple of important plays on the defensive end.

Heat head coach Erik Spoelstra said that Butler took it upon himself to ice the win for the team, per Vivek Jacob of Yahoo Sports Canada.

“Jimmy was pretty darn good. He didn’t have a tonne of energy — at that point had already played 40 minutes, but it was like, alright, I’m just gonna make sure we seal this and this doesn’t get to a second overtime, or even worse, a loss.”

Norman Powell led the charge for the Raptors with 23 points and 8 rebounds off the bench, while Fred VanVleet chipped in 19 points, 6 assists and 3 steals. Young rising star Pascal Siakam only had 15 markers in the loss, but also pulled down 12 boards. The game also marked All-Star veteran guard Kyle Lowry’s return from an 11-game layoff due to injury. His return was spoiled by the loss, although the vet point guard came up with an all-around performance of 12 points, 11 assists and 6 rebounds.

But Siakam’s absent scoring punch was sorely missed by the defending champs. He was largely missing especially during the crucial moments of the game. The 25-year old star quickly acknowledged his faults, emphasizing that he has to really embrace his role of being a leader for the team.

“I think I've got to understand I've got to be in attack mode all the time, that's who I am. And being one of the leaders of the team, I have to expect to go out like that, 100 percent of the time, every single game, so, depends... there's going to be games where, you know, but at the end of the day I've gotta do a better job of that, making sure that I'm always aggressive and that once we get to overtime and things like that I'm in a rhythm and not just feeling like I just started the game.”

The loss also ended Toronto’s current seven-game winning streak, and drops them to a 15-5 record. They will try to bounce back on Thursday when they host James Harden and the Houston Rockets.

The San Antonio Spurs notched their 8th win of the season as they held off the visiting Houston Rockets with a 135-133 double-overtime victory. Young budding combo guard Lonnie Walker IV topscored for the Spurs with 28 points off the bench, while All-Star swingman DeMar DeRozan produced a near double-double outing of 23 points and 9 assists. Bryn Forbes had five makes from beyond the arc, and starting center Jakob Poetl did the dirty work inside as he grabbed 15 boards and blocked five shots.

It was a career night for Walker, the Spurs’ second-year athletic guard who had an injury-plagued rookie year last season. Walker gave the credit to his coaches and teammates, who gave him the confidence he needed to perform well under pressure, as per the Associated Press.

“It was confidence. My teammates kept me going, and once I started feeling it, I’m just going to let it go and play my game. I know what I can and cannot do. I’m just happy  that we played team ball and we got this win.”

James Harden had another masterful performance of 50 points, while making all of his 24 trips to the free throw line. The Beard also had 9 rebounds, 6 assists and 4 steals. Clint Capela amassed another massive double-double night of 22 points and 21 boards, while Russell Westbrook triple-doubled with numbers of 19 points, 10 rebounds and 10 assists.

However, the game was not without a controversy. The closely-fought game was marred by one blown call: a Harden dunk that should have been counted. In a transition opportunity in the fourth quarter, the former MVP dunked the ball with such impact that the rock went through the net and then went back in. After the game, ESPN’s Tim MacMahon reported that the Rockets are planning to take this up to the league office.

“A Rockets source is optimistic that the NBA office will take action regarding James Harden's dunk that didn't count, either awarding the win to Houston or orderingthat the final 7:50 be replayed because the Rockets outscored the Spurs in regulation.”

It remains to be seen how the commissioner Adam Silver and the league office will react on this, but it was perfectly clear that the Harden dunk should have been counted. Either way, the Rockets will just have a full day to rest before they travel to Toronto to go up against Pascal Siakam and the defending champs.

PG13 gets revenge win against Lillard and Blazers

Months after sustaining a painful first-round playoff exit at the hands of the Trail Blazers, Paul George finally atoned for the loss as he and the Los Angeles Clippers defeated Portland, 117-97. Montrezl Harrell led the Clips in scoring with 26 markers off the bench, while George contributed 25 points and six three-pointers. Stretch big man Patrick Patterson also came off the bench to chip in 19 points and 8 boards, including five hits from beyond the arc.

In a game in which Clippers superstar forward Kawhi Leonard only scored 11 points, one would think that they would have lost, right? Instead, it paved the way for the team’s supporting cast to prove that this is a 12-man deep roster brimming with quality talent. Blazers star Damian Lillard had positive things to say about the Clippers’ excellent roster depth, as per NBA.com’s Casey Holdahl.

"In our scouting report we're talking about Kawhi Leonard and Paul George and Lou Williams, talking about making sure we slow those guys down. Obviously (George) had a really good game, but we did our jobs on Kawhi, we did our job on Lou Will. It just shows you how deep they are, how many guys they can turn to one how much production they get across the board."

Lillard had 16 points and 7 assists in the loss, while Hassan Whiteside tallied a double-double stat line of 18 points and 13 rebounds. CJ McCollum put up 20 markers in the loss, the Blazers’ 13th in 21 games this season.