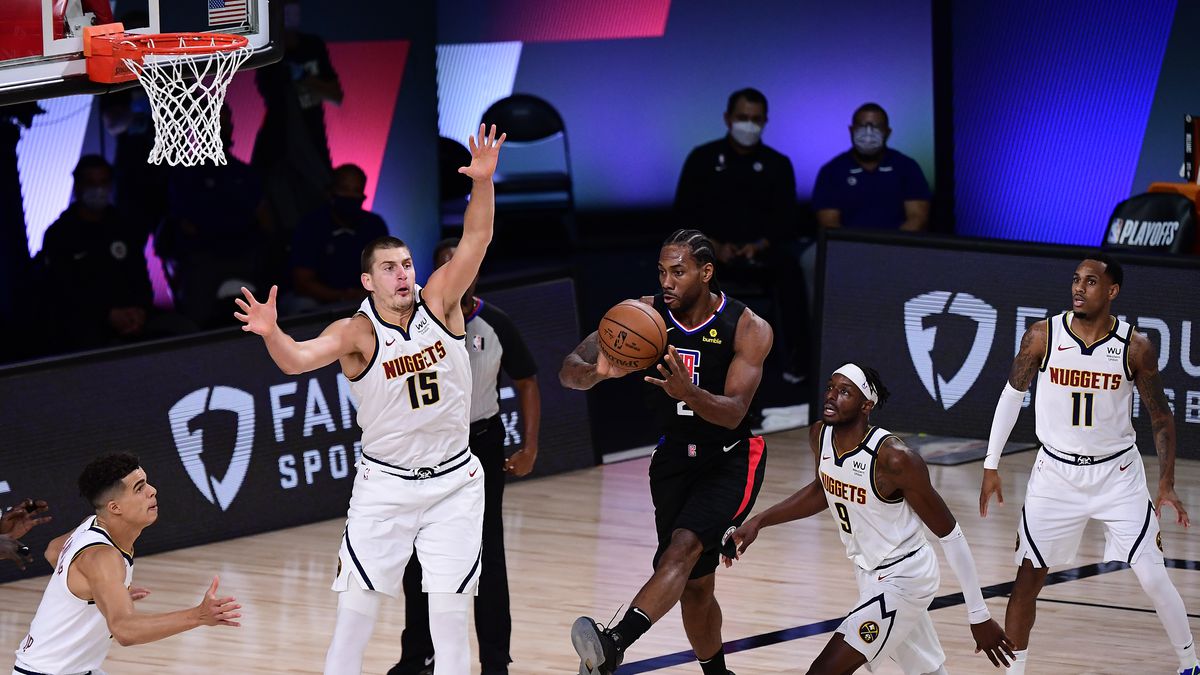 he Denver Nuggets showed up in Game 2 of the 2020 Western Conference semifinals, looking very different from the team that was dismantled in the series opener. The Nuggets led from start to finish to take a 110-101 win over the Los Angeles Clippers on Saturday to even their best-of-seven series inside the NBA bubble in Orlando, Florida.

Nikola Jokic had a huge night for the Nuggets, as he finished with 26 points and 18 rebounds to go along with four assists and three blocks. The superstar center, who shot 10-for-17 from the field with four three-pointers, also set the tone for the Nuggets, tallying 13 points in the opening quarter for Denver.

"That first quarter Nikola was phenomenal," Nuggets head coach Mike Malone said via The Denver Post. "In Game 1, we stood, the ball didn’t move, the bodies didn’t  move, we just came down and settled. We did not make their defense work at all. I felt tonight there was a marked difference in our approach, our energy, our movement, and we made ourselves a lot harder to guard. And when we’re at our best, the ball finds the open man."

Jamal Murray also had a solid night for the Nuggets with 27 points and six assists to go along with three rebounds and a block. Paul Millsap and Gary Harris added 13 points apiece for Denver, while Michael Porter chipped in 11 points and seven rebounds off the bench. Murray felt that they came out with more energy on both ends of the floor in Game 2 compared to Game 1.

Denver came out firing on all cylinders in the first period, which ended with them on top by 19 points. Not going down without giving a good fight, the Clippers managed to slowly trim Denver's lead and pulled within five points, 91-86, with 8:36 left to play in the game.

However, the Nuggets countered with their own run to restore order. Jokic made it a seven-point game again in the ensuing possession. Harris knocked down two straight three-pointers to make it a 13-point game halfway through the fourth quarter. Jerami Grant converted two free throws to make to cap the 10-0 run and Denver never looked back and held on to the win to tie the series, bouncing back from a humiliating 120-97 loss in Game 1 on Thursday.

"Our group believes in themselves," Nuggets coach Malone said via ESPN. "We've shown that we're a very resilient group that can execute and find ways to win in close games down the stretch. It's great to be able to tie this series up and have that life and belief going into the next game."

Kawhi Leonard finished with 13 points and 10 rebounds to go along with eight assists and three steals. It was the lowest-scoring game from Leonard inside the NBA bubble. In the opening round of the playoffs against the Dallas Mavericks, the superstar forward averaged 32.8 points. In their Game 1 win, the two-time NBA Finals Most Valuable Player also had a solid night with 29 points on 12-for-16 shooting from the field.

"We dug ourselves in a 20-point hole early," Leonard, who shot just 4-for-17 from the field on Saturday, said after the game. "We can't do that, but give the Nuggets credit. They came in very aggressive tonight on both ends, they played well and they won the game. A few easy ones didn't fall early, and that was it from there."

The Clippers, who are considered heavy favorites to win the title this season, will look to bounce back on Monday. George is not ready to push the panic button, saying that they just need to be more ready in Game 3.

"We will be better for Game 3," George said via Los Angeles Times. "There’s no pep talk for it. It’s the playoffs. We got to be ready. We’ve got to come out a lot stronger and we’ll be up for the fight."

The Toronto Raptors were already being counted out by many after falling 0-2 in the series and when they were just seconds away from going down 0-3, but the defending champions have silenced their critics. Toronto escaped with another hard-earned 100-93 win over the Boston Celtics in Game 3 of the Eastern Conference Semis series to even the series at 2-2 on Saturday.

The Raptors had to grind it out, as they shot just 39.5 percent from the field and 38.6 percent from beyond the arc. Raptors head coach Nick Nurse admitted that their performance was not too pretty despite taking the win, but he had nothing but praises for the effort of his team in Game 4.

"I think there’s been some effort and some desire and some toughness and trying to carry it through for most possessions," Nurse said via Sportsnet Canada. "Each possession seems to be pretty critical in a playoff game, and we’re getting to the point where we’re playing most of the possessions as, we’re trying hard, we’re making some mistakes and they’ve got good players and they make shots and some things like that,     but we’re down and we’re trying to compete is the biggest thing."

Jayson Tatum led the Celtics with a double-double, finishing with 24 points and 10 rebounds to go along with three assists. Kemba Walker posted 15 points and eight assists, but he was disappointed with his performance after taking just nine attempts in the entire game, saying that he needs to be more aggressive and play at a higher intensity to set the tone for Boston.

"It's tough, man," Walker said via ESPN. "Obviously, we didn't want to come out that way, but it just happened. We've just got to clean it up. We've got to find a way, man. We've got to be better. I have to be better. I have to find a way to get my teammates at a higher intensity, and I will. I'm going to try my best to bring the best out of these guys. Nobody ever said it was going to be easy. We know how the playoffs is."

Boston shot better than the Raptors at 44.0 percent, but they were atrocious from beyond the arc, converting just seven of their 35 attempts. Jaylen Brown had an ugly 2-for-11 clip from the three-point region, while Tatum, Walker, and Marcus Smart all had identical 1-for-6 clip from downtown.

The Celtics now found themselves in a tight spot against the defending champions after being in control of the series. Boston took the first two games of the series, and were less than a second away from taking a commanding 3-0 lead. OG Anunoby's three-pointer at the buzzer helped the Raptors avoid falling into an 0-3 hole.

There are concerns about the usage rate of Toronto's starters after four of them -- Lowry, VanVleet, Siakam, and Anunoby -- averaged above 40 minutes in the past two games. However, VanVleet said that they are not worried about it, saying that they are ready to make the sacrifice and their coaching staff is also communicating well with the players inside the floor during the game.

"There’s nothing to be resting for, there’s no tomorrow," VanVleet said. "There’s no,really, way to manage it and coach is putting his trust in us and communicating to a level where if you need a rest you get one, if you need him to call a timeout you get one, but right now I think he’s rolling with the big guns and that’s the way that we like it."

Game 3 of the Raptors-Celtics series will be on Monday.