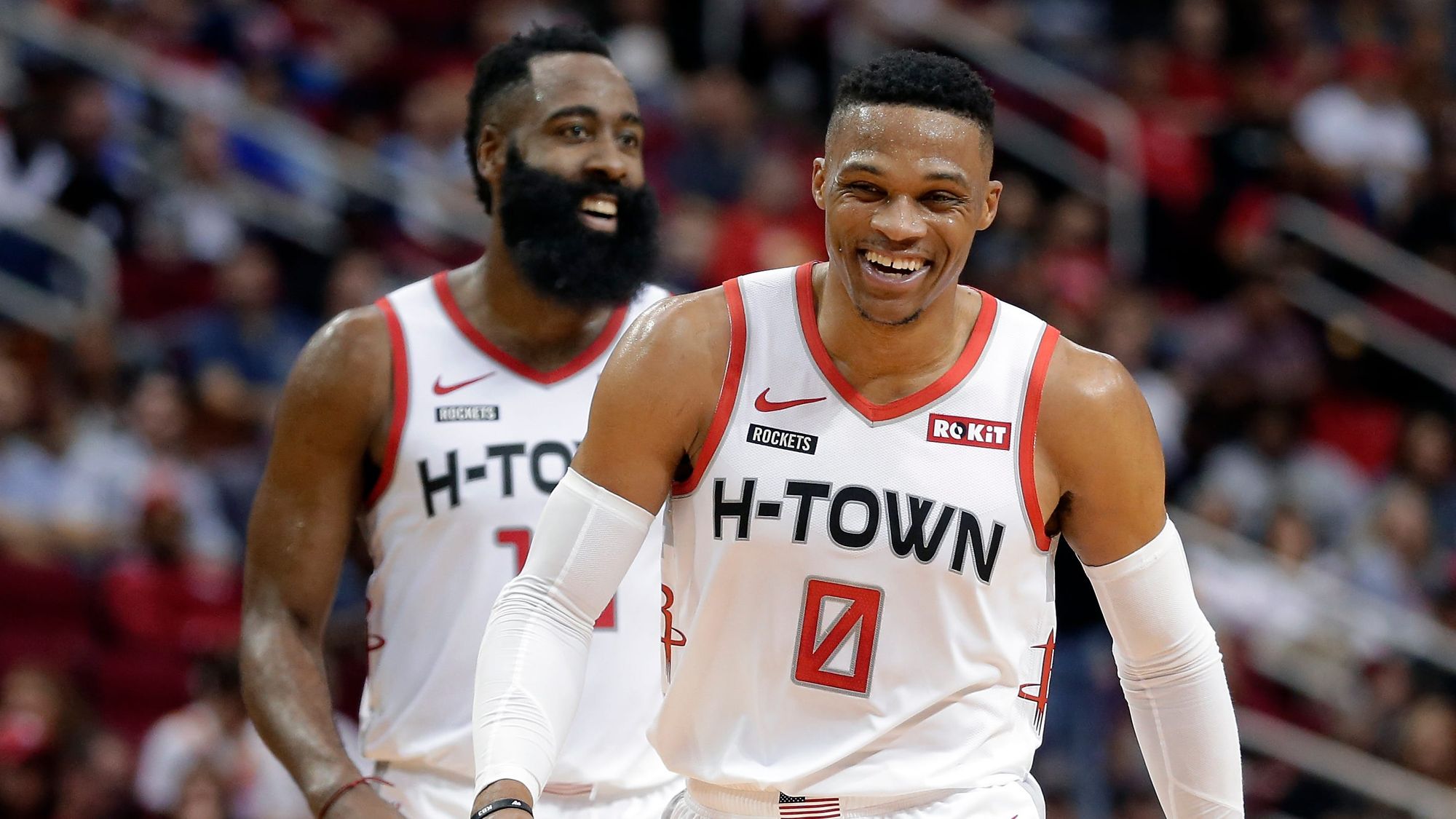 Harden and Westbrook combine for 64 in Houston win

The Houston Rockets finally overcome their struggles as they carved a much-needed 117-111 victory over the Minnesota Timberwolves. James Harden shook off his recent shooting woes and poured in a game-high 37 points, including seven assists and five three-pointers. Russell Westbrook backstopped Harden with another all-around stat line of 27 points, 6 rebounds, 7 dimes and 4 steals. Veteran gunner Eric Gordon returned from a short injury lay-off and came off the bench to contribute 16 markers.

But this win did not come easy for the Rockets. They fell behind by nine points after the Wolves came through with an explosive opening quarter performance. But the small-ball Rockets squad stayed on the course and their resiliency eventually paid dividends. They slowly chipped away at the deficit, and was able to build a three-point advantage entering the fourth quarter.

Rockets head coach Mike D’Antoni praised his players for staying composed and coming out of the halftime huddle with more sense of urgency on their game, as per the Associated Press.

“We got a little desperate and we played harder and we played with a little bit more  purpose. And then we made big shots that we hadn't been making.

Hopefully we've learned our lesson and we don't have to take any steps backwards."

It was until the last couple of minutes in the third period that the Rockets finally created a huge wave of momentum. A buzzer-beating triple at the horn from combo guard Austin Rivers gave the home team a morale-boosting 83-80 lead that they managed to take care all the way to the final buzzer.

More than their high-powered, “micro-ball” offense, Harden also pointed out that it was their defense that paved the way to the win. The former Most Valuable Player of the Year emphasized that he and his teammates heightened their efforts on the defensive end in the second half, as per Salman Ali of ESPN 97.5 Houston.

"Defensively. We started off really slow the first three quarters, but towards the end of the third quarter we picked it up. We got into their bodies and did what we were supposed to do."

In addition to this relieving victory, the Rockets also received a big boost from their excellent veteran sixth man. Gordon, who was forced to miss the last two assignments while battling a sore right knee injury, was again instrumental for the team’s second unit. D’Antoni gave props to his vet, saying that the team also relies on him defensively.

“He’s a big piece. There’s no doubt about it. This was a good step. He’s got that ability to hit clutch shots. And defensively, he’s good. He’s a good on-ball defender. So yeah, it’s big.”

D’Angelo Russell led the Wolves’ charge as he finished with 28 points, 6 rebounds, 5 assists and 4 steals. Stretch power forward Juancho Hernangomez came up with a double-double performance of 18 points and 10 rebounds, while veteran do-it-all forward James Johnson produced 16 markers off the bench.

It was a disappointing outcome for the Timberwolves, who had the lead for almost the first three quarters before getting bombarded by the Rockets’ 10-0 run to close out the third period. Still, Wolves second-year head coach Ryan Saunders was pleased with how his team performed against a “desperate” elite playoff contender.

“I was proud of how our guys fought. I understood what we were up against tonight. A team that was in a way desperate for a win ... but I was proud of a lot of thing that these guys did."

The loss drops the Karl-Anthony Towns-less Minnesota squad to a 19-45 record. They will try to bounce back when they go on a back-to-back road trip against the Oklahoma City Thunder and the San Antonio Spurs.

LaMarcus Aldridge returned from a six-game absence as he helped the San Antonio Spurs defeat rivals Dallas Mavericks, 119-109. Aldridge did not show any rust from his injury lay-off as he was aggressive with his shots all night long and netted a team-high 24 markers. Young point guard Derrick White had an all-around outing of 14 points, 7 boards, 9 assists, 2 steals and 4 blocks. Veterans Rudy Gay and Marco Belinelli came off the bench to chip in 17 and 16 points respectively as the Spurs earn a very important win to boost their hopes for a coveted playoff spot.

It was a very efficient team performance for the Spurs on their offensive sets. They moved the ball well and compiled 32 assists. Those extra passes led to wide open shots as the Spurs put up a 51% overall clip from the field, including a stellar 46% from beyond the arc. Most importantly, they ultimately took care of the ball well, only turning the ball over eleven times in this game.

Spurs star DeMar DeRozan, who tallied a double-double outing of 13 points and 12 assists, expressed his relief of having his star big man teammate return from an injury, as per the Associated Press.

“We’ve been banged up, hurt, missing key guys. So, to get a key guy back tonight shows you what we’re capable of. He came through big on both ends tonight.”

All-Star point guard Luka Doncic exploded with 38 markers for the Mavericks, while also adding seven rebounds, eight dimes and two steals to his tally. Sweet-shooting swingman Tim Hardaway Jr fired off four triples on his way to 20 points, and Dorian Finney-Smith amassed 15 points. Mavericks star Kristaps Porzingis struggled in his powerhouse match-up with Aldridge as he only made four of his 15 shots and failed to crack double digits in the scoring column.

Dallas head coach Rick Carlisle was very disappointed with how his team collapsed in the third period, as per Eddie Sefko of mavs.com.

“The second half really hurt us. They played great. We did not play consistently well. When we pushed the lead to 13 in the third quarter, right there we needed to bear down and sustain and try to build it. They immediately made a big run back at us, got the crowd into it. And from there, the momentum was difficult to get back.”

The Maverick had a five-point advantage after the first half, and even mounted a double-digit lead in the third period. However, their lapses on the defensive end stripped them of their chance to nail their 40th victory of the season.

This was also the Mavs’ second consecutive defeat as they lost a three-point decider at the hands of the Indiana Pacers last Sunday. Luka, who also impressed from deep as he hit six triples in the loss, knows that the team will be able to forget this loss and move forward with confidence.

“In the fourth quarter, we gave up the lead. It wasn’t our best defensive game.

I’m not worried at all. At the beginning of the season, people had us out of the    playoffs. We’ve shown we can be in the playoffs and as of now we’re in the playoffs. There’s a long way (to go). We got a lot of stuff to learn.”

The Mavericks will have not much rest as they battle Nikola Jokic and the Denver Nuggets in the second leg of their current back-to-back schedule tomorrow night. Reports have it that the team will opt to sit out Porzingis in their efforts to manage the star’s health. Ever since returning from a recent injury, the star big man’s workload has been managed as Dallas aims to preserve him for the playoffs.

With a 39-27 win-loss slate in the West, the Mavericks are holding on to the seventh spot in the conference. They are only 1.5 games below the Rockets and the Thunder in the standings.