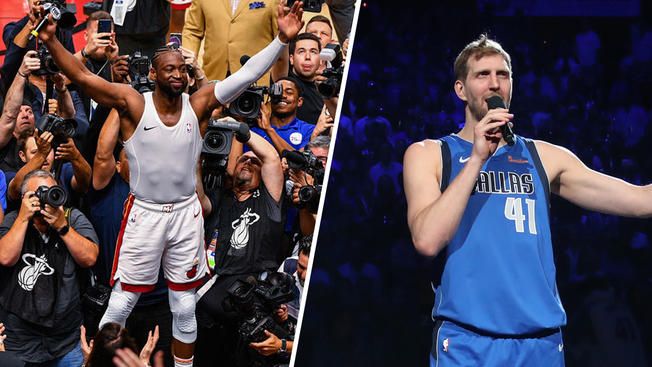 Arguably the third-best shooting guard in league history, Dwyane Wade exited Miami in a spectacular fashion as he put up 30 points in the Heat’s 122-99 victory over the Philadelphia 76ers. The Heat’s frontcourt dominated the Joel Embiid-less Sixers as Hassan Whiteside netted 15 points, 9 rebounds, and 4 blocks, while Bam Adebayo contributed 19 markers and 9 boards.

It was the last game for the Heat legend, and this season was a fitting conclusion to Wade’s Hall of Fame career, per Heat broadcaster Tony Florentino as told via the CBS Sports.

"All this stuff that's been going on this year in all these different NBA cities, all the   tributes, just the respect that's being shown for Dwyane, I don't think that's just about him being a great player. I think fans and all the players realize what a great person he is -- that he always did everything with class. I've said this many times  before, but as great a player as Dwyane was, and really still is, he's a better person. You hear that about a lot of guys, but it's sometimes for the cameras, you know what  I mean? But with Dwyane, it's true. He's a Hall of Fame person."

Despite being ousted of playoff contention as the Detroit Pistons won on the same night, it was an electric atmosphere inside the American Airlines Arena. Wade went on a scoring spree in the fourth quarter, banking three-pointer after the other, using his signature step-back jumper to give the Heat fans one last glimpse of their favourite player.

Dirk announce retirement after putting up 30

In his last game in Dallas, the sweet-shooting legendary center Dirk Nowitzki hit his first four shots as he pushed the Mavericks to a memorable 120-109 victory over the visiting Phoenix Suns. Nowitzki went on to finish the game with 30 points, 8 rebounds and 3 assists, while prized rookie point guard Luka Doncic completed another triple-double stat line of 21 points, 16 boards, 11 assists and 3 steals. Dirk then went on to officially announce his retirement after the game, a marvelous ceremony that featured old-school stars Charles Barkley, Scottie Pippen, Larry Bird, Shawn Kemp and even Detlef Schrempf, his countryman from Germany.

Dirk also says that he will still be around helping the Mavs organization, per ESPN’s Tim MacMahon.

"I want to clear my head. I want to travel. I want to enjoy my family that's sacrificed  so much over the last years and see my kids and then go from there. I'm sure after a  year or two of doing that, something has to come and find my passion. I'm sure I'll  stick around the Mavericks somehow."

The 41-year old All-Star has certainly been the face of the franchise for years, winning the Most Valuable Player award in 2007 and leading the Mavericks to a Finals upset of the Heat’s Big 3 in 2011.

The Suns got a big night from 39-year old Jamal Crawford, who torched the Mavericks with 51 points, 5 rebounds and 5 assists. Both the Suns and the Mavs are out of playoff contention this year.

Now fighting for their playoff lives, the Detroit Pistons stormed back from a massive halftime deficit to turn back the Memphis Grizzlies, 100-93. Andre Drummond led the Pistons with an all-around production of 20 points, 17 rebounds, 5 steals and 3 blocks, while veteran playmaker Ish Smith tallied 22 markers and 4 assists in the comeback win. Trailing by 21 points entering the second half, the Pistons mounted an incredible comeback, trimming the Grizzlies’ lead to five points after a Luke Kennard transition three-pointer in the nine-minute mark of the fourth quarter. Two consecutive buckets by Smith in the last minute of the period gave the Pistons a four-point lead with 28 seconds remaining on the clock, icing the game for the home team. The Pistons will now need to win against the lowly New York Knicks to assure themselves of a playoff spot.

Delon Wright topscored for Memphis with 15 points and 9 boards, while Bruno Caboclo also netted 15 markers in their 49th loss of the season.

In what could be a previous of the first-round match-up in the Western Conference playoffs, the Oklahoma City Thunder prevailed over the Houston Rockets with a heated 112-111 victory at their home floor. Russell Westbrook secured another triple-double with 29 points, 12 rebounds and 10 assists, while Paul George came through with the game-winner, on top of an impressive outing of 27 points, 9 boards and 4 steals. A P.J. Tucker putback gave the Rockets a four-point lead with a little under two minutes left on the clock. Then a Westbrook three-pointer at the top of the key trimmed the deficit to one, but Harden split his free throws that led to the George game-winning corner triple. Harden had a wide open look at the ensuing play, but missed the jumper.

Harden had a game-high 39 points and 10 rebounds, while Chris Paul scattered 24 points, 8 boards and 6 assists.