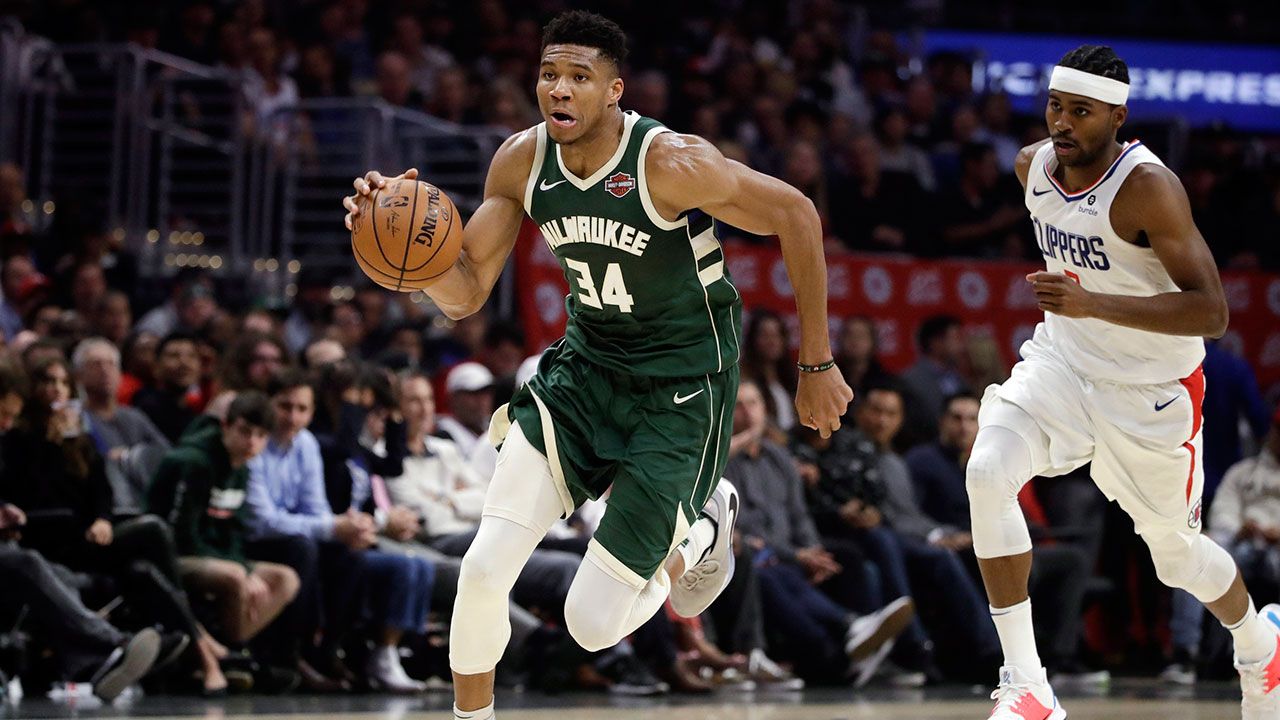 Bucks defeat Clippers as Kawhi sits out yet again

Giannis Antetokounmpo posted a monster stat line as he pushed the Milwaukee Bucks past the Los Angeles Clippers, 129-124. Antetokounmpo had a near triple-double night of 38 points, 16 rebounds, 9 assists, 2 steals and 2 blocks, including four three-pointers. But it was not just the Greek Freak running the show for the visiting team. Six Milwaukee players came up with double-digit scoring in the win. Veteran combo guard George Hill provided the needed spark off the bench as he netted six triples on his way to 24 markers. Eric Bledsoe provided 20 points, while Brook Lopez was an intimidating presence down low as he finished with 11 points, 12 boards and 6 blocks.

The Bucks erected an 11-point lead at halftime, but the depleted Clippers squad showed the relentlessness and never-say-die attitude they are known for. Still, the Bucks were able to hold them off in the fourth quarter with Giannis leading the way. Head coach Mike Budenholzer emphasized how proud he is of his team’s character, as per Fox Sports Wisconsin.

“I’m proud of the way the guys kind of found a way to weather a big storm, made enough plays. Giannis, I think he played the whole fourth quarter, and was just fabulous … But I’m proud of our guys for finding a way to win on the road.”

Milwaukee also got the long-range game going as they hit 18 three-pointers, while also taking care of the ball quite well. The bench scoring was greatly taken advantage by the Bucks, especially with the Clippers missing the services of superstar forward Kawhi Leonard.

Lou Williams and Montrezl Harrell stepped up big time as they both put up 34 points in the loss. Patrick Beverley produced 20 points and 10 rebounds, while sophomore shooting guard Landry Shamet logged in with 14 markers on four makes from beyond the arc. Despite the loss, Clippers head coach Doc Rivers still loved how his squad stayed within striking distance of a powerhouse team, per Fox Sports West.

“It was great. I wanted to win the game though. The effort was great. We fought, and all that stuff. That’s what we have to do on nights when we are shorthanded … The mistakes we made probably added up to the loss, but overall I loved how we played.”

The Clippers, who are now sporting a 5-3 win-loss card, will face Damian Lillard and the Portland Trail Blazers in the second game of their back-to-back schedule. On the other hand, the Bucks will visit Utah to face Donovan Mitchell and the Jazz on Friday.

The Memphis Grizzlies got a massive boost from their young backcourt duo as they held off Karl Anthony-Towns and the Minnesota Timberwolves, 137-121. Dillon Brooks drilled five treys as he finished with a game-high 31 points, while impressive rookie point guard Ja Morant put in an all-around performance of 26 points, 4 rebounds and 4 assists. Another Grizz rookie in combo forward Brandon Clarke turned in an impressive outing of 18 points and 8 boards, while veteran swingman Jae Crowder also chipped in 18 markers.

The Grizzlies were able to build an early 11-point lead after the opening period, but the Wolves cut it to five entering the fourth quarter. With the exception of sophomore power forward Jaren Jackson Jr, every player that Memphis head coach Taylor Jenkins fielded on the floor scored multiple baskets. Jackson, who left the game with an injury after playing only 15 minutes, still managed to pull down four rebounds and dish out two assists.

Andrew Wiggins, who has been on a scoring tear this season, led the charge for Minnesota with a team-high 30 points, on top of 6 assists and 2 steals. Anthony-Towns had his usual dominant game as he amassed a double-double night of 25 points, 13 boards and 2 blocks. Rookie swingman Jarrett Culver showed his versatility as he finished with 15 points, 5 rebounds and 7 assists. Robert Covington and Treveon Graham had 13 and 10 markers, respectively.

Doncic stars as Mavericks earn fifth win of the season

The Dallas Mavericks again relied on the excellent do-it-all game of Luka Doncic as they carved a close-call 107-106 victory over the Orlando Magic. Luka put up 27 points, 7 rebounds and 7 assists as Dallas improved their record to five wins against two losses. Star big man Kristaps Porzingis struggled on offense with only 10 points, but the team’s second unit was able to answer the call.

Four of the Mavericks’ bench mob scored in double-digits with Maxi Kleber and Tim Hardaway Jr chipping in 14 and 13 points, respectively. They filled in nicely for Porzingis’ miscues, a great indication of the team’s depth especially now that they are focused on a playoff appearance.

As for Porzingis, he knows that he can figure all this out and improve on his shooting efficiency. The 7-foot-3 Latvian center still says that he is happy to get the win, per Greg Joyce of the New York Post.

“I’m happy that we were able to get the win with me playing as awful as I did. Onto  the next one. I want to figure this thing out. Once I get back to where I want to get back, it will feel even better going through this right now. I just want to figure it out as soon as possible, but I have to give myself time and I have to make it simple for   myself.”

Aaron Gordon led the way for the Magic with 23 points, while All-Star center Nikola Vucevic came up with an all-around performance of 19 points, 11 rebounds and 7 assists. Orlando struggled mightily from three-point territory, making just six of their 24 attempts from beyond the arc.