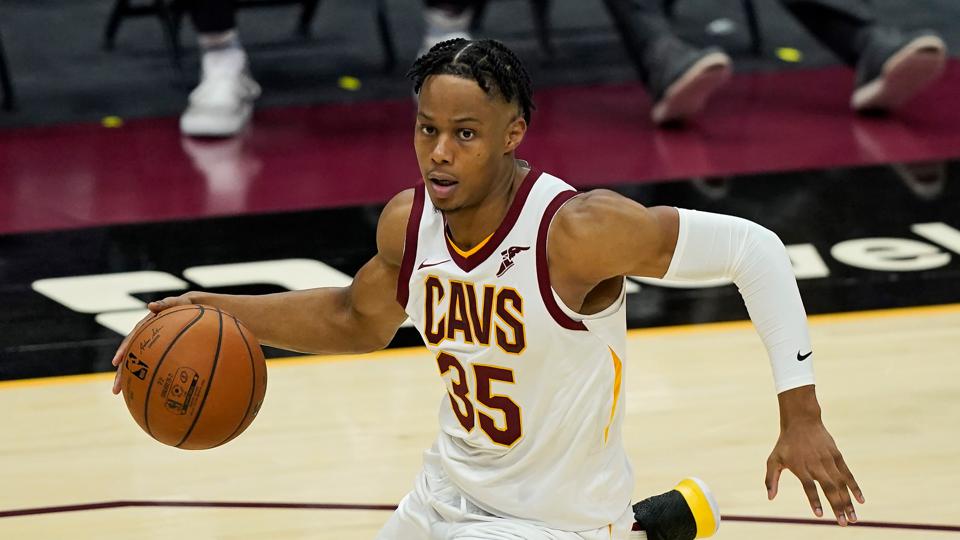 The Cleveland Cavaliers were dead set in selecting Isaac Okoro as the fifth overall pick in the 2020 NBA Draft, and the rookie guard quickly showed why the Cavs were high on him this offseason. Okoro helped the Cavaliers escape with a 107-104 win over the Indiana Pacers on Saturday in their preseason opener at Rocket Mortgage Fieldhouse in Cleveland, Ohio.

Okoro hit the game-winning layup and bonus free throw with 0.3 seconds left to play in the game to cap off his excellent first game for the Cavaliers. Before hitting the biggest basket before the final buzzer sounded, Okoro also scored 13 points for the Cavaliers in the final period, helping them erase an eight-point deficit heading into the final period. In 33 minutes, the 19-year-old rookie posted 18 points on 6-for-9 shooting and three steals.

"I thought they were going to take the last shot," Okoro said. "I saw the clock going down and my mindset was just get a stop, play defense, because during those last couple of minutes we were going back and forth. I was just trying to tell the team to get a stop and if we get a stop, we’re going to score and win this game."

Cavaliers head coach JB Bickerstaff also had nothing but praises for his rookie. Bickerstaff said that he gave the former Auburn standout a lot of leeway for him to get into his rhythm late in the game. The Cavaliers coach said that he had to urge Okoro to stop hesitating when he is open, which worked wonders for the Cavaliers, as he exploded for 16 points when it mattered the most.

"I wanted him to shoot the ball every time he was open. Pretty simple," Bickerstaff said. "Obviously he’s capable of making shots. I think he was uncomfortable in those moments, still trying to search and catch a rhythm. But I wanted him to have the confidence and I wanted his teammates to give him that confidence as well that when he’s open, take those shots, knock those shots down and then the rest of the game opens up."

Cedi Osman also had a strong performance for the Cavaliers, as the fourth-year forward ended up with a team-high 23 points on 6-for-11 shooting, including a 3-for-6 clip from beyond the arc. Sophomore guard Darius Garland added 14 points, Thon Maker had a double-double with 10 points and 10 rebounds, while rookie guard Damyean Dotson chipped in 12 points and three assists for the Cavaliers, who missed Collin Sexton with a right ankle sprain.

Domantas Sabonis, who missed the NBA bubble stint of Indiana last season, led the Pacers with 16 points and 13 rebounds, while Malcolm Brogdon also posted 16 points to go along with five assists and four rebounds. Myles Turner, whose name was a mainstay in trade rumors this offseason, posted 14 points and six boards, while Doug McDermott and Justin Holiday posted 13 and 12 points, respectively.

"I liked how he was operating in the paint," new Pacers head coach Nate Bjorkgren said of Sabonis, who had to recover from a foot injury during the offseason. "I thought he was good and physical playing through hits. He's a willing passer, a very good screener. His teammates love playing with him."

It was just a preseason game, but all eyes were on the third overall pick in the 2020 NBA Draft on Saturday. Charlotte Hornets rookie LaMelo Ball failed to score even a single point in his preseason debut, as they took a 111-100 loss to the Toronto Raptors at the Spectrum Center in Charlotte, North Carolina.

Ball ended up scoreless in 16 minutes of playing time in his first preseason game, missing all five of his attempts from the field, including three from beyond the arc. However, the rookie guard grabbed 10 rebounds and dished out four highlight dimes, which showed why he was tagged as the best-passing guard in this year's rookie class.

Despite making highlights with his passing ability and showing that he can also be a good rebounder as a guard, Ball said that he was not contended with his performance because it ended in a loss. However, Hornets head coach James Borrego, saying that he liked what he saw from the 19-year-old guard.

"I thought it was a good performance," Borrego said of Ball's performance via USA Today. "First time out there, and he looks like he belongs. I thought he was solid tonight. Made some really good plays, some good reads. He’s talking, he’s communicating. I thought overall a solid performance to start."

Gordon Hayward, who signed a four-year deal worth $120 million with the Hornets, also loved what he witnessed from Ball. Hayward, who ended up with 11 points and four rebounds in 20 minutes of action for the Hornets, said that Ball's impact goes beyond his statistics.

"He does a lot of things well out there on the court," Hayward said of Ball. "Certainly rebounding, he was great on the glass then he pushes it. I think he’s gonna be really good for us this year. I think it’s something that, he sees the floor really well, and he’s a  guy that can get it and start the fast break for us. He’s flying around out there."

The Hornets had a great start, showing a fast-paced offense earlier in the game to build a 32-23 lead after the opening period. However, the Raptors caught fire in the second quarter, outscoring the Hornets, 35-19, to build a seven-point lead heading into the third quarter. Toronto never looked back en route to the win.

Matt Thomas was a huge spark off the bench for the Raptors, as he finished with 16 points on 5-for-9 shooting from the field, including a 4-for-7 clip from the three-point region. Terrence Davis added 13 points, starting forward OG Anunoby tallied 11 points and five boards, while Fred VanVleet posted nine points on top of five assist and five steals for Toronto, who played without veteran guard Kyle Lowry.

"He's a shooter, obviously, but he's also a good player," Nurse said of Thomas via Sportsnet Canada. "He cuts and he moves. He does the right thing on defense. He'll get overmatched once in a while size-wise or strength-wise or whatever. But I think for as much as he does at the other end, and his good decision-making at both ends, I’m wanting to lock him into a role this year where he's a big factor."

The Golden State Warriors leaned on a balanced attack to escape with a 107-105 win over the Denver Nuggets on Saturday at the Chase Center in San Francisco, California. Six Warriors scored in double digits to overcome the big night from Nuggets superstar Nikola Jokic, who torched the Warriors with 26 points in 23 minutes.

Kent Bazemore, one of Golden State's new players this season, led the Warriors with 13 points and five rebounds, while Damion Lee added 12 points in 12 minutes. Steph Curry, Kelly Oubre Jr., Jordan Poole, and Mychal Mulder each had 10 points for the Warriors, who played without Draymond Green and rookie James Wiseman. Green and Wiseman reportedly tested positive for Covid-19 and will undergo quarantine before returning to action.

Warriors head coach Steve Kerr said after the game that seeing Curry play again gave him a sigh of relief after the former NBA Most Valuable Player played just five games last season due to a broken hand. Kerr said, though, that Curry was a "sight for sore eyes" after shooting just 3-for-10 from the field.

"It's always just great to see him out on the floor," Kerr said via ESPN. "And I think he looks really good physically, that's the main thing. He worked so hard in the offseason and he's in great shape. And now it's just a matter of getting his timing and his rhythm down, but he's definitely a sight for sore eyes."

Curry admitted that he is still adjusting to his new teammates like Oubre and Bazemore, and even Andrew Wiggins, who was acquired in a mid-season trade with the Minnesota Timberwolves last season. Kerr had the same take, saying that there is no magic formula for team chemistry and it will take time for his players to be comfortable playing with Curry, who will shoulder a lot of responsibilities with Klay Thompson out for the season.

"It takes time for sure," Kerr said. "He's so unique. There's nobody like him in the NBA. Nobody who can play on and off the ball at that level and who creates that kind of havoc. And so I think with most players who come in, they're not used to the second half of the possession. They're sort of used to whatever the pattern is in the beginning. But as soon as maybe Steph gives up the ball, that's when the action really starts the  way we play."