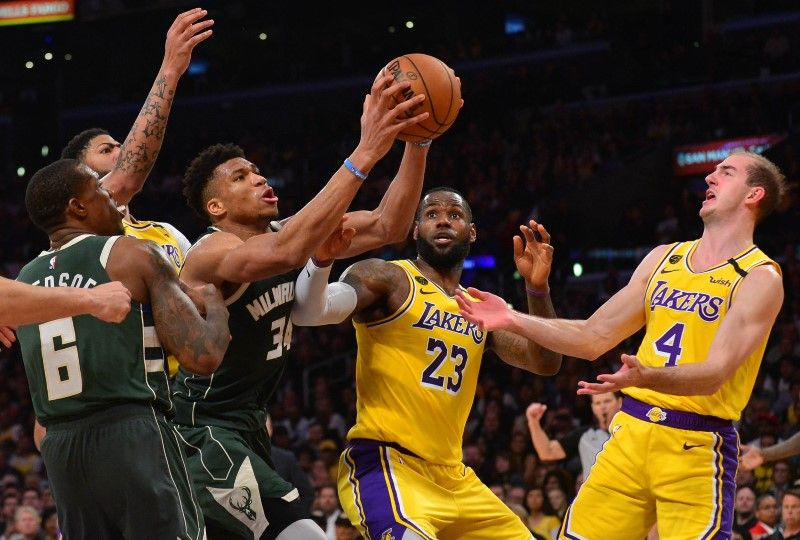 The Los Angeles Lakers used a dominant third quarter performance as they defeated Giannis Antetokounmpo and the league-leading Milwaukee Bucks, 113-103. LeBron James led all scorers with 37 big points, on top of his 8 rebounds, 8 assists and 3 steals. Star big man Anthony Davis backstopped James as he also impressed with his 30 points, 9 boards and 2 blocks. Young scoring forward Kyle Kuzma produced 11 points and 8 rebounds off the bench, but it was pretty much the James-Davis tandem that carried the workload for the Western Conference leaders.

The first half was a tremendous battle of active defensive fronts for both teams. The Lakers were only limited to 19 markers in the opening quarter, but they managed to salvage a precarious one-point advantage as the game hit its mid-way point. Then Davis and the Lakeshow finally turned it on in the third period.

With much pride on stake, the Lakers came out of the halftime huddle with a heightened sense of urgency. They went on an incredible 18-0 run, which according to the Elias Sports Bureau is the highest unanswered run against the Easter Conference frontrunners. LeBron had 14 points and 3 assists in that quarter alone, co-starring with Davis in dismantling the Bucks’ highly-regarded defense.

With this win against the powerhouse Milwaukee squad, the Lakers have clinched a spot in the playoffs. The last time that the Lakers appeared in the playoffs was way back 2013, a six-year drought that has Hollywood fans clamoring for more success from LA’s favourite basketball team. While saying that this face-off against the Bucks was equally fun and competitive, James also emphasized that he has accomplished his goal of putting the Lakers franchise on the postseason map again, as per the Associated Press.

"We know who we are, and this is great competition. To have the opportunity to compete at a high level, that's fun and exciting. But we know what we're capable of.

I came here to put this franchise back where it needed to be. The league is not what it is if the Lakers are not winning."

Despite only hitting six three-pointers on an atrocious 18% clip, the Lakers still found ways to hack out the win. Their activity on the defensive end forced the Bucks to commit 19 turnovers, while also limiting All-Star forward Khris Middleton to just 12 markers.

Even though Giannis still put up a team-high 32 markers, James set the tone by making it difficult for the Greak Freak to manufacture his shots. Giannis, who also tallied 11 rebounds and 6 dimes, credited LeBron for always staying competitive despite his already-long career tenure in the league, as per Matt Velasquez of the Milwaukee Journal Sentinel.

Sophomore shooting guard Donte DiVincenczo came off the bench to contribute 17 points and 4 assists, while starting big man Brook Lopez fired three triples on his way to 13 markers and 5 boards. Eric Bledsoe, who put up a measly scoring output of only 11, struggled offensively with his five turnovers.

The loss almost got to a double knockout situation for the Bucks after Antetokounmpo looked like he injured his left leg. He was still able to finish the game, but was favouring his leg after the hard-fought contest. Fortunately, Bucks coach Mike Budenholzer provided a positive update on the reigning MVP’s condition.

“He made it look and sound like he was OK. Anytime anybody takes a fall – Giannis isn’t any different than anybody else, we need everybody – so yeah, it was pretty scary. Hopefully, everything is fine. ...

We do have to protect him from himself, but pretty confident that he was OK to keep going.”

The loss is the 10th of the Bucks this season, further dimming their hopes of finishing with at least 70 wins. They are still standing on top of the East, and could cruise to a home court advantage all playoffs long.

The Utah Jazz leaned on the all-around offensive brilliance of their veteran starting point guard as they carved a tough 99-94 road win over the Boston Celtics. Mike Conley, who had his share of high and low moments in his first year with the Jazz, topscored with 25 points, 5 assists and 3 steals, including a stellar 6-10 clip from beyond the arc. Jordan Clarkson reinforced Conley with his 17 markers off the bench, filling in for the unusually quiet scoring night from their two All-Stars, Donovan Mitchell and Rudy Gobert.

After a back-and-forth affair in the opening canto, the Jazz started to clamp down on defense in the second quarter. They held the Celtics to just 20 markers in that period, helping them build a 13-point advantage after the first half. Both squads put up 17-point outings in the third quarter, but the Jazz managed to hold off Boston’s late comeback attempts in the final frame.

Conley expressed his excitement in seeing the team finally coming together as of late, as per Matt Payne of utahjazz.com.

"We're better than we were last week, I can tell you that. We're headed in the right direction, beating a team like this on the road, regardless of who they had in the lineup.

The game's back to being easy again. Making the right plays, playing off of each other. Guys have really been unselfish. It's easy to play that style, and it's fun to be around."

Despite the fact that both Mitchell and Gobert only accounted for a total of 20 points, Utah’s conscious effort on the defensive end ultimately sealed their win. The Jazz held the Celtics to a paltry 27% clip from three-point territory, while also forcing Boston’s star point guard Kemba Walker to only 13 points.

Jazz head coach Quin Snyder did not fail to notice how well his players fared on their defensive schemes.

"I'm just happy that we played defense. We could make a few more shots. I thought we had some really good looks in the second half. I really am more pleased that we didn't play great offense in the second half but were still able to put that energy into our defense and win the game."

Smart, who also made six successful hits from deep, voiced out his concerns on the lack of effort and desire from his teammates to win. The outspoken combo guard also reiterated that they have no other choice but to move on from this and just bounce back in their next assignment, as per

"Our effort was s---. We gave them the first couple punches and then, after that, our effort died down. We picked it up towards the end, but it was too late at that time.

We definitely couldn't make a shot. They did a great job of coming out and executing all the way through, and that really put us on our heels. So we've got to move on from it. Game's over. Give credit to Utah. They came in and did their job, and we just have to bounce back on Sunday."

Smart and the Celtics drop to a 42-20 record in the East. They played without their two injured versatile forwards, Jaylen Brown and Gordon Hayward.