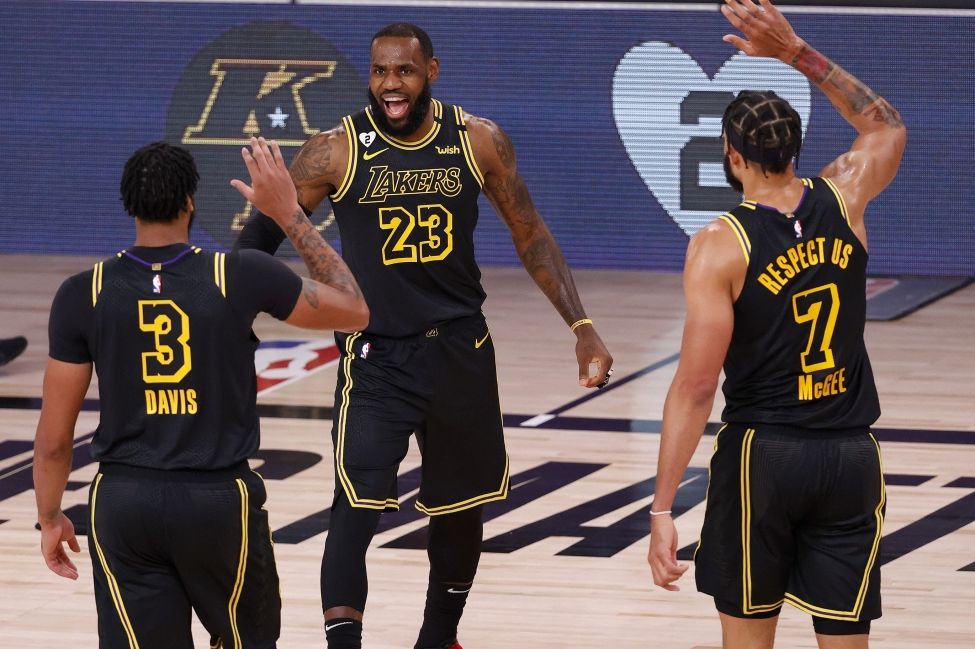 The Los Angeles Lakers ran away with an impressive 116-108 win over the Portland Trail Blazers on Saturday behind the remarkable performance of superstar LeBron James. The four-time NBA Most Valuable Player was on attack mode, helping the Lakers take a 2-1 lead in their first-round playoff series.

James finished with 38 points on 11-for-18 shooting, including a 4-for-8 clip from beyond the arc. The three-time NBA champion also posted 12 rebounds, eight assists, and two steals. James was locked on right from the opening tip, and he admitted that he really wanted to be very aggressive in Game 3.

"I just wanted to try to be aggressive and see if I can get into the paint, see if I can find my guys, and I was able to do that early," James said via Los Angeles Times. "Get to the line, even though I missed a few of them early on, but I feel like I had a good rhythm and just tried to make plays for myself and for my teammates."

Anthony Davis also had a big night for the Lakers, as he racked up 29 points and 11 rebounds to go along with eight assists, three blocks, and two steals. The superstar forward struggled in the first half, where he only scored six points, but he made sure that he'll be a better threat in the second half of the match.

Kentavious Caldwell-Pope added 13 points for the Lakers with three three-pointers, while Alex Caruso tallied 10 points and seven assists. Danny Green chipped in eight points and four rebounds to go along with two blocks, which all came in the fourth period when the Trail Blazers were desperate to mount a comeback. The Lakers, as a team, shot 50 percent from the field, including a 10-for-30 clip from beyond the arc.

Damian Lillard, who suffered a dislocated finger in Game 2, paced the Trail Blazers again with 34 points on 8-for-20 shooting, including five three-point conversions. The superstar point guard, who also had seven assists and five rebounds, appears to be not affected by the finger injury, but he admitted after the game that it bothered him at times during the game.

"Tonight, the biggest thing I felt was just going up to shoot, when I was gathering the ball, I was uncomfortable," Lillard said via ESPN. "Sometimes I would subconsciously try to ease up on it, so I would lose the ball a little bit. When I was making moves, in the middle of my dribble, I would ease up on it because I would feel the pain, and I would lose the ball a little bit. It kind of stopped me in my tracks."

CJ McCollum scored 28 points to go along with eight rebounds and four assists, while Carmelo Anthony ended up with 20 points and six rebounds to go along with four steals and two assists. Anthony showed his vintage form in the third quarter, scoring 13 for the Blazers, but it was not enough to prevent the Lakers from taking a seven-point lead heading into the final 12 minutes after tallying 40 points in the third period.

The Trail Blazers will look to bounce back in Game 4 on Monday. Portland is playing without Zach Collins, who was already ruled out for the rest of the season with an ankle injury. The Lakers will likely have Rajon Rondo, who was listed as active on Saturday but was a late scratch due to back spasm.

The Oklahoma City Thunder remained within striking distance in their series against the Houston Rockets. The Thunder escaped with a 119-107 win in overtime in Game 3 on Saturday in Lake Buena Vista, Florida.

Dennis Schroder came off the bench and provided a huge lift for the Thunder, as he finished with 29 points to go along with five rebounds, five assists, and two steals. Chris Paul also had a productive game for the Thunder with 26 points on top of six rebounds and five assists. Paul let his game do the talking after admitting in Game 2 that he needs to do more if they want to avoid falling into a very deep hole in the series.

"We just wanted to fight," Paul said via ESPN. "We know how tough it is coming back down 3-0. We wanted to fight tonight, and I think that's what we did."

Shai Gilgeous-Alexander was also on target again for the Thunder, finishing with 23 points and seven rebounds to go along with six assists and four steals. Gilgeous-Alexander knocked down a crucial three-pointer late in regulation, which put the Thunder in a position to win the game, although the match eventually needed an extra period to be decided. Veteran forward Danilo Gallinari ended up with 20 points and seven rebounds for OKC.

On the other hand, James Harden finished with 38 points and eight assists before fouling out in overtime. Harden admitted that their mistakes down the stretch were costly, preventing them from taking a commanding 3-0 lead in the series despite playing without his sidekick, Russell Westbrook, who is still out with a quad injury.

"We definitely let one get away," Harden said via Houston Chronicles. "Especially in that last minute and I think, throughout the course of the game we just made too many mental mistakes and gave them an opportunity to score and it’s that simple."

The Miami Heat are now a win away from advancing to the second round of the playoffs after holding on to a 124-115 win against the Indiana Pacers in Game 3 of their best-of-seven series on Saturday. Jimmy Butler led the Heat  anew with 27 points and eight rebounds in 37 minutes.

Miami had a strong start and was firing on all cylinders in the opening half, which ended with them taking a 74-56 lead. However, Indiana had a run of their own in the second half, and they managed to pull within two points in several instances, but Miami was able to dodge their runs en route to the win.

Goran Dragic maintained his excellent momentum with 24 points to go along with six assists and three steals. Bam Adebayo had a double-double with 22 points and 11 rebounds, while snipers Tyler Herro and Duncan Robinson added 20 and 15 points, respectively, for the Heat.

"You have to expect it’s going to be a complete, 48-minute game, if not longer, and you’ve got to compete all the way through and our guys had that mindset," Heat head coach Erik Spoelstra said via Miami Herald. "Even though Indiana made a big run in that second half, we were expecting it to be tough."

The Heat will look to advance to the Eastern Conference semifinals when they face the Pacers again in Game 4 on Monday. If they win, they will likely face the league-leading Milwaukee Bucks, who posted another convincing win in their first-round series against the Orlando Magic.

Giannis Antetokounmpo had another dominant night to lead the Bucks to a 121-107 blowout win over the Magic in Game 3 of their series. The reigning NBA Most Valuable Player finished with 35 points on an impressive 12-for-14 clip from the field. Antetokounmpo also racked up 12 rebounds, seven assists, two steals and a block.

"All of us feed off of Giannis and his leadership and his energy and his           competitiveness," Bucks head coach Mike Budenholzer said after the game via Fox  Sports Florida. "I think when he’s showing it and sharing it with all of us, toughing all of us, it’s great. He’s our leader. We needed it."

Khris Middleton had his best game of the series with 17 points to go along with eight rebounds and six assists. Brook Lopez had 16 points and six boards, while Eric Bledsoe chipped in 14 points and eight assists on top of five rebounds and three steals for the Bucks, who shot 56.1 percent from the field, including a 17-for-37 clip from downtown.

DJ Augustin paced the Magic with 24 points and six assists, while Terrence Ross and Nikola Vucevic contributed 20 points apiece. It was the lowest-scoring game for Vucevic so far in the series after averaging 33.5 points and 12 rebounds in the first two games.

The Bucks will try to maintain their momentum when they collide again on Monday. The Magic, on the other hand, will look to avoid getting into a difficult situation, but it remains to be seen whether or not they will play without injured key players Aaron Gordon and Michael Carter-Williams in Game 4.