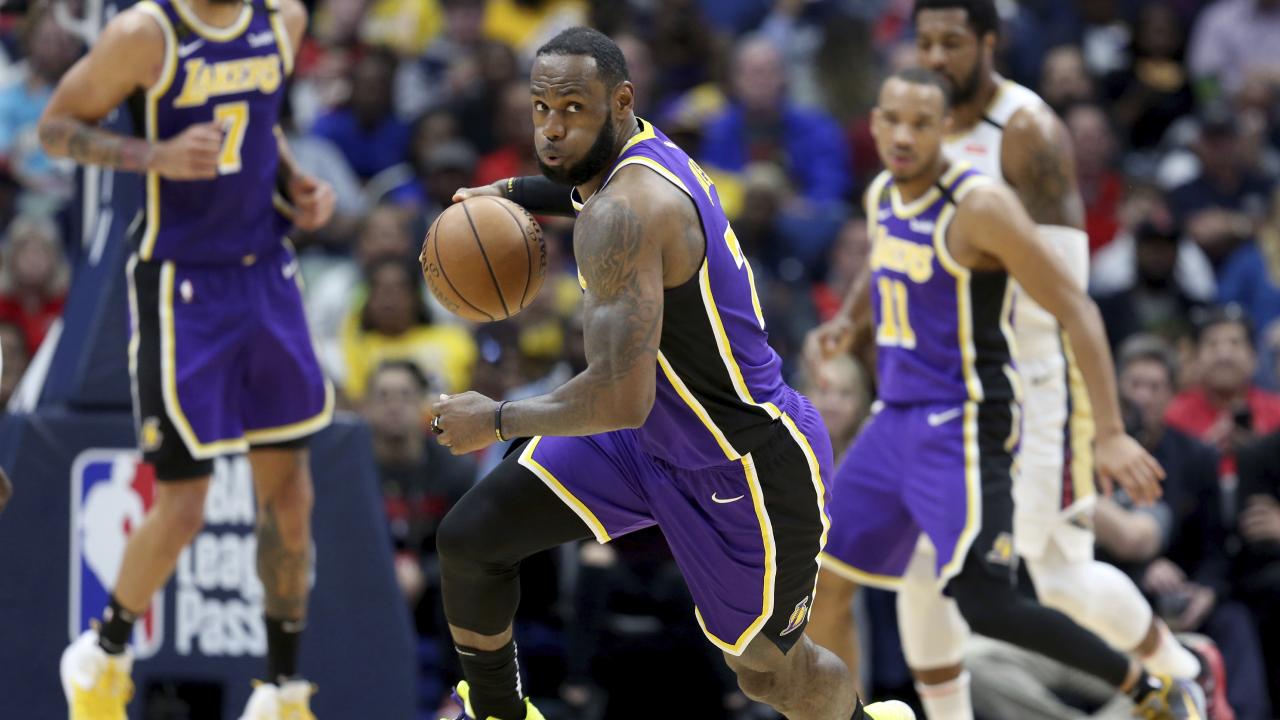 The Los Angeles Lakers banked on another impressive performance from their four-time MVP as they hacked out a 122-114 win over the New Orleans Pelicans. As the team played without injured superstar big man Anthony Davis, LeBron James carried the Lakers all the way. The King put forth a majestic stat line of 34 points, 12 rebounds, 13 assists and 2 steals. James was also efficient with his shooting, missing only seven of his 21 attempts while hitting three triples. Kyle Kuzma, who replaced Davis on the starting line-up, contributed 20 markers. Kentavious Caldwell-Pope had 13 points off the bench, and shooters Avery Bradley, Danny Green and Markieff Morris chipped in 10 markers apiece.

It was a back-and-forth game that saw the Lakers finally pull away in the waning minutes of the fourth quarter. Even without Davis, the atmosphere was obviously playoff-like. LeBron and Pelicans prized rookie Zion Williamson exchanged baskets one after the other, while ex-Laker youngsters Lonzo Ball, Brandon Ingram and Josh Hart also made big plays.

But it was still the 35-year old King who stole the show in New Orleans. LeBron answered every Pels’ play as he displayed his unique versatility on both ends of the floor. Lakers head coach Frank Vogel could not help but be amazed on how his main star keeps on solving every defensive trick that the Pelicans throw at him, as per the Associated Press.

"Obviously, spectacular performance by LeBron James. His shot-making was ridiculous from both in the post, with turnaround jump shots, and at the 3-point line.

When they brought double-teams, he is one of the best passers in the league. He showed it tonight and picked their defense apart."

It was another widely-viewed game for the Lakers, especially with fans getting all pumped up for Round 2 of the LeBron-Zion face-off. Williamson had another solid shooting display, going 12-16 from the floor on his way to a team-high 35 points. Of course, he is still a long way from reaching the superstar status that LeBron has already earned.

But after the game, the latter approached the rookie to express his thoughts and give him a few lines of advice. As one of the elder statesmen in the league, James has been looked up to by a lot of young talented players who grew up watching him on television. Although he is yet to give up the torch, James knows that he has to commit on passing on his knowledge of the game to the future generation of NBA superstars.

"It's just my responsibility. No one told me to do that. You see all these guys -- these young guys. You know, the league is in a very good place and if I'm able to give my wisdom of the game, pass it down while I'm playing or after I'm playing, I feel like it's my job because the game has just given me so much since I started playing when I was 8 years old."

Lonzo also brought out his all-around package in this game, norming a near triple-double stat line of 19 points, 9 rebounds, 9 assists and 3 steals for the Pelicans. Starting center Derrick Favors amassed a double-double outing of 12 points and 14 boards.

However, Ingram and star combo guard Jrue Holiday struggled to put up their usual brilliance on the offensive end. While Ingram was still able to come up with 15 points, he only made five of his 23 shots, including a lowly 1-9 clip from beyond the arc. Holiday only shot the ball 10 times and only two trips to the free throw line.

After the loss, Ingram credited the Lakers’ tremendous switching defense that caught him and the team off guard, as per the team’s official page at NBA.com.

"They have a switching defense that gets us stagnant sometimes. We have to do a  better job at executing. I think I get so hyped up in these games and tend to force some shots instead of letting the game come to me. I think I did a good job, I think we had some open shots but we just didn't make them."

The loss drops the Pels to a 26-34 record, and 3.5 games behind the 8th-seeded Memphis Grizzlies. They will try to bounce back from this loss when they go on a back-to-back schedule against the Minnesota Timberwolves and the Dallas Mavericks starting on Tuesday.

The Los Angeles Clippers narrowly avoided an upset from their superstar-less opponents as they defeated the short-handed Philadelphia 76ers, 136-130. Kawhi Leonard led the Clippers in the scoring column with 30 markers, while co-star Paul George chipped in 24 points, 4 rebounds and 2 steals. Lou Williams and Montrezl Harrell both came off the bench to produce 24 points apiece as the Clippers earn their 41st victory of the season.

Playing without injured All-Stars Joel Embiid and Ben Simmons, the Sixers were still able to keep up with the powerhouse Clippers squad. Behind the incredible shooting night from combo guard Shake Milton, Philly raced to a 39-point first quarter performance. The Clippers answered shot after shot as both teams got real hot on the offensive end.

But the home team would storm back after the halftime huddle. Trailing the Sixers by two points at the end of the first half, the Clippers clamped down on defense in the third quarter. They held Philadelphia to just 24 total points, the only quarter in which the visiting team scored less than 30 points. The Clippers already built a 12-point lead entering the final frame, and managed to hold off the upset-seeking 76ers.

Clippers head coach Doc Rivers praised his players for staying on course even while sustaining the damage that Milton’s outstanding shooting caused, as per Andrew Greif of the Los Angeles Times.

“Like I told our guys, in a lot of nights you have to win in different ways, this is not the way we want to get used to. This really tells you a lot of things about our team. You can sustain a hit like that and still win a game , when a team shoots like that, that says a lot about you, more than what you didn’t do. It’s more of what you did.”

Milton, who came into the game norming averages of 8.8 points, 2.2 rebounds and 2.0 assists per contest, put up a game-high 39 points on a stellar 7-9 clip from the three-point line. Scoring forward and ex-Clipper Tobias Harris poured in 25 points, 4 boards and 4 dimes, while Alec Burks netted 15 markers off the bench. Veteran big man Al Horford, who has been placed back to the starting line-up with Simmons and Embiid sidelined, amassed an all-around outing of 12 points, 8 rebounds, 6 assists and 2 blocks.

After the game, Milton said that he got his groove going when he hit his first three shots. He also pointed out that this is actually the first time he played in Staples Center, as per the Associated Press.

"It kind of just happened randomly. I was ready, as soon as there was the  opportunity. Once the first couple ones knocked down, especially the first three, I felt pretty good. It definitely feels cool. I've never really played at Staples Center before."

With their two superstars sidelined for a week or so, the Sixers will need more offensive punch from the likes of Milton, Harris and Burks. Combo guard Josh Richardson exited the game early when he collided with his teammate, apparently suffering a concussion as a result.

This tough loss now drops the Sixers to the sixth seed in the Eastern Conference, with the streaking Indiana Pacers overtaking them in the standings. The road will get much more difficult from this point on as they play once more in Staples when they go up against LeBron and the Lakers on Tuesday.