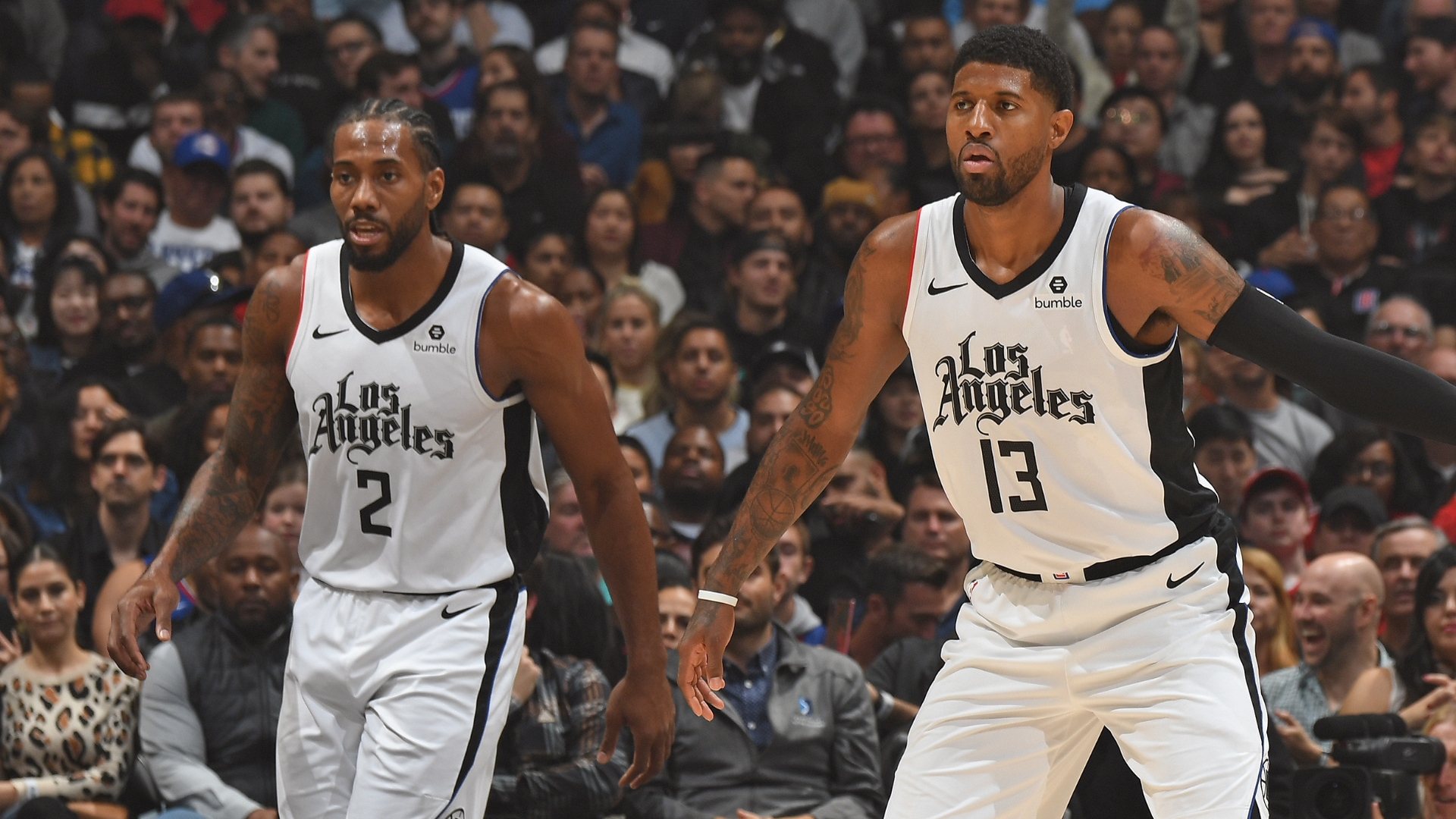 The Los Angeles Clippers officially secured the second spot in the Western Conference standings on Wednesday. The Clippers cruised to a 124-111 victory over the Denver Nuggets in Orlando in a possible preview of second-round playoff matchup down the road.

Paul George led the Clippers with 27 points on top of four rebounds and four assists, while Kawhi Leonard tallied 26 points and five rebounds. Lou Williams provided the scoring lift off the bench again with 23 points, while Ivica Zubac had a double-double with 15 points and 12 rebounds.

The Clippers shot 54.1 percent from the field, including a 14-for-37 clip from beyond the arc. Their excellent performance on both ends of the floor helped the Clippers finish with the second-best record in the Western Conference for the first time in franchise history, but head coach Doc Rivers is not ready to celebrate.

"We don’t really care," Rivers said via Los Angeles Times. "We want to win it all. We've got to improve as a team, we know that we have work to do. But we're going to the playoffs with that mindset. That's the only thing that matters right now."

George echoed his coach's statement, saying that finishing second will not be a huge factor in this year's playoff. There will be no real homecourt advantage in the postseason this year, as all games will still be played inside the NBA bubble in Walt Disney World in Florida.

"Seeding doesn't really mean anything in this bubble," George said. "There’s no home- court advantage. Again, for us it’s just about the small things and building habits, gaining steam going into these playoffs."

Finishing second in the West did not give them a huge advantage in terms of firepower as well, as they will be facing the seventh seed Dallas Mavericks. The Mavericks are one of the rising teams in the league with the emergence of superstar Luka Doncic and All-Star center Kristaps Porzingis. George said, though, that they are very focused on their goal heading into the postseason, which will start on Monday.

On the other hand, Jerami Grant led the Nuggets with 25 points and six rebounds, while Nikola Jokic had a double-double with 17 points and 13 rebounds. Michael Porter Jr. ended up with 11 points and five boards, while Torrey Craig and Jamal Murray ended added 10 points apiece.

Nuggets coach Michael Malone singled out Porter for his performance in the bubble. While he only scored 11 points on Wednesday, Malone believes that the rookie forward is slowly finding his niche in the team, which he thinks would be critical for them if they want to go deep into the playoffs.

"If you want to win big, especially in the playoffs, you need three scorers. You can’t rely on just two people. We did that a lot last year and that put a tremendous amount of pressure and demand on Nikola, especially. We welcome Michael’s offensive output, and he’s starting to figure things out in our read-and-react offense," Malone said via The Denver Post.

The Nuggets ended up third in the Western Conference standings with a 46-26 record. They will be facing the Utah Jazz in the opening round of the playoffs. If they successfully defeat the Jazz in the series, the Clippers could be their opponent in the second round unless the Mavericks pull off an upset over Los Angeles in the first round.

Toronto Raptors head coach Nick Nurse took a backseat on Wednesday and let assistant coach Adrian Griffin take the head-coaching duties. Griffin did not disappoint, as he led the Raptors to a 125-121 victory over the 76ers. Kyle Lowry paced the Raptors with 19 points and three assists but deflected the credit to Griffin for preparing them well and to Nurse for showing humility.

"It means the world. It means everything," Lowry said of Griffin getting a chance to coach via ESPN. "It shows the humility of our coach, Nick Nurse, to have the understanding to give him a chance to coach us on national TV and have his first opportunity to coach a team from the first tip to the end of the game. He did an unbelievable job. Hopefully, Coach Griffin is a head coach soon."

Griffin, whose name has floated around for several coaching vacancies recently, said that having a chance to coach felt like a dream come true for him. "For one night, I felt like Cinderella," he said. "I had the glass slippers on. It's great. Tomorrow, it's back to reality. But it was an awesome feeling."

Chris Boucher made a big impact off the bench, as he finished with 19 points and nine rebounds to go along with four blocks. Norman Powell had 17 points, while Pascal Siakam raked up 15 points, nine rebounds, and four assists for the Raptors, who are set to finish second in the East and will face the Brooklyn Nets in the opening round of the 2020 NBA Playoffs.

Tobias Harris paced the 76ers with 22 points to go along with six rebounds and five assists, while Furkan Korkmaz finished with 21 points and five rebounds off the bench. Joel Embiid finished with five points and nine rebounds, as he played just 14 minutes as part of their preparation for the playoffs. The 76ers will finish sixth in the Eastern Conference and will go up against the Boston Celtics in the first round of the postseason.

Meanwhile, the Oklahoma City Thunder moved up to fourth in the Western Conference standings after escaping with a 116-115 victory over the Miami Heat. The Heat led by as much as 22 points but collapsed down the stretch on Wednesday night in Lake Buena Vista, Florida. Mike Muscala played the hero's role for the Thunder, as he knocked down two crucial three-pointers down the stretch to help the Thunder complete the comeback.

"I've got a great deal of respect for Mike Muscala just because he's a total pro and  keeps himself ready," Thunder coach Mike Donovan said after the game via ESPN. "Whenever he's called upon, you know you're going to get a really reliable guy."

Muscala finished with just six points but were the biggest six points for the Thunder. Trailing by three with less than 40 seconds left to play, Muscala buried a three-pointer to tie the game. Solomon Hill gave the lead back to the Heat in the ensuing possession, but Muscala hit another three-pointer with 5.2 ticks left off an assist from Darius Bazley, who also had a solid game for OKC.

"Baze had a great fourth quarter," Muscala said of Bazley, who finished with a team- high 21 points off the bench on 8-for-14 shooting with five three-pointers. "I just told him to keep his eyes up. It was a great play by coach, the drawn out play, and it went  in."

Shai Gilgeous-Alexander scored 18 points, while Danilo Gallinari added 14 points. Abdel Nader chipped in 13 points, while superstar guard Chris Paul ended up with seven rebounds and four assists for the Thunder, who will be facing the Houston Rockets in the first round of the playoffs.

James Harden had a crazy stat line on Wednesday night, but his efforts were not enough as the Houston Rockets took a 108-104 loss to the Indiana Pacers. Harden erupted for 45 points and 17 rebounds to go along with nine assists and three steals, but the Russell Westbrook-less Rockets still fell short against the Pacers.

Myles Turner had 18 points and 12 rebounds for Indiana, while Justin Holiday also posted 18 points and six dimes. Edmond Sumner scored 17 points off the bench, while Victor Oladipo and Doug McDermott added 16 points apiece for the Pacers, who played without starters TJ Warren and Malcolm Brogdon.

"I think all of our guys, it seems like when they get an opportunity to play, they've done some good things," Pacers head coach Nate McMillan, who recently signed a one-year contract extension with the Pacers, said via ESPN. "We had a number of guys out tonight. We wanted to give some guys opportunities and they played well."

The Pacers will go up against the Heat in their next game, where the winner will finish fourth in the Eastern Conference. Regardless of the results of Friday's game, Miami and Indiana will face each other in the opening round of the 2020 NBA Playoffs.

"The Clippers aren't just a title contender, they are the favorites to win the NBA title. These factors are what set the Clippers apart from their competition, said "Lines".

No matter what the future holds for the Clippers, it's shortly gonna be an interesting season!