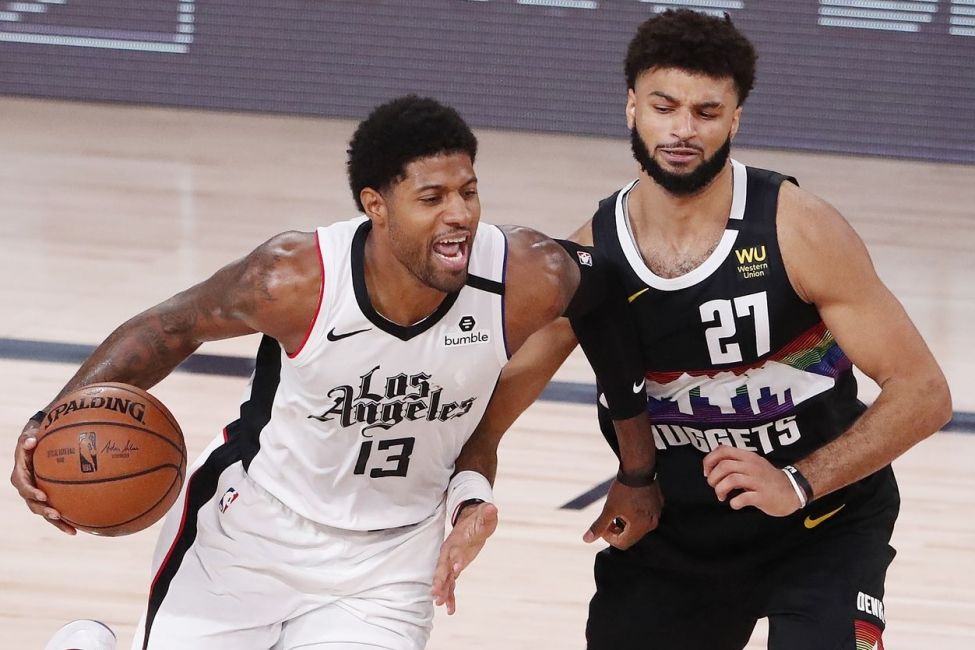 The Los Angeles Clippers are back in the driver's seat in their Western Conference Finals series against the Denver Nuggets. The Clippers leaned on their suffocating defense in the fourth period to escape with a 113-107 win over the Nuggets in Game 3 of their best-of-seven series on Monday in Orlando, Florida.

The Nuggets were in control in the second quarter when they led by as much as 12 points, but the Clippers played with more sense of urgency from then on, catching the Nuggets off guard with their remarkable defense, which led to several turnovers that gave Los Angeles the opportunity to trim the lead quickly. From being down 12, the Clippers pulled within two points at the half.

"They got very aggressive in the end of the second quarter. We had three turnovers in that 12-2 run, and all three were Nikola," Nuggets head coach Mike Malone said of the momentum-changing run from Los Angeles late in the second quarter. "And he's just gotta understand, every time he puts the ball on the floor, they're coming. Whether he needs to spin-dribble or whether it's just him just catching in the post and dribbling."

The two teams had a see-saw battle in the second half. However, the Clippers brought their defense into another level anew in the fourth quarter, where they outscored the Nuggets, 29-19, en route to the crucial win.

"The game came down to one of the two teams was going to play some defense," Clippers head coach Doc Rivers said. "For 3 1/2 quarters both teams were basically scoring. In the last six minutes it was our defense. We had our lapses. There's no doubt about that. But overall, when we locked in we were really good."

Kawhi Leonard bounced back from his sub-par performance in Game 2. The two-time NBA Most Valuable Player had a double-double with 23 points and 14 rebounds to go along with six assists and two blocks, including one in the fourth quarter where he deflected a Jamal Murray dunk using his middle finger.

Paul George also had a big night for the Clippers, as he finished with a team-high 32 points on 12-for-18 shooting from the field, including a 5-for-7 clip from beyond the arc. The superstar forward also tallied four rebounds, four assists, and two steals for the Clippers. It was the highest-scoring game for George in the series and since tallying 35 points in Game 5 of their first-round series against the Dallas Mavericks.

"I've got to help him," George said of taking some pressure on Leonard's shoulders."Kawhi has done more than enough down this stretch. Some nights, it's not going to be his night, and I have to be myself. I have to help him, pull the weight, make plays, make shots. Give him credit, getting us this far, but he can't go into every game with  that pressure that he's got to be great on both ends."

Marcus Morris Sr. added 12 points to go along with four rebounds and three assists, while Montrezl Harrell and Lou Williams provided lift off the bench with 11 and 10 points, respectively. Los Angeles shot 54.7 percent from the field and went 20-for-26 from the free-throw line.

On the other hand, Nikola Jokic was a force to reckon with for the Nuggets again. The All-Star center finished with 32 points and 12 rebounds to go along with eight assists. Jokic gave Los Angeles' big men a lot of troubles with starting center Ivica Zubac fouling out of the game. Coach Rivers had nothing but praises for Jokic, saying that the Nuggets center is the best passing center that he has ever seen.

"He has a little bit of everybody," Rivers said of Jokic. "He has all the footwork and the moves of an Olajuwon, the lanky and goofy, like goofy intelligence of Kevin  McHale. Shoot, man, he's just good. He's the best passing big that I've seen, I think, ever. I know [Bill] Walton was one of [the best passing centers ever]."

Michael Porter Jr. had a remarkable game for Denver, posting a double-double with 18 points and 10 rebounds. The rookie forward also added three steals and had a spectacular dunk over Harrell late in the third quarter. Paul Millsap and Jerami Grant added 11 points apiece, while Gary Harris ended up with 10 points and six rebounds. Jamal Murray struggled to find his rhythm, finishing with 14 points on just 5-for-17 clip from the field.

The Nuggets will look to bounce back in Game 3 on Wednesday. Malone, whose team is considered as heavy underdogs in the series, remains confident of Denver's chances against the second-seeded Clippers because they are always ready and determined to silence their doubters.

"No one gives this team a chance to do a lot of things," Malone said via ESPN. "We don't really care what anybody thinks about us, especially outside of Colorado. It's the belief that we have in the locker room. It's been there since day one."

The Boston Celtics bounced back from two consecutive defeats to take control of their second-round series against the Toronto Raptors. The Celtics led from start to finish to take an impressive 111-89 win over the Raptors in Game 5 of their Eastern Conference semifinals series.

The Celtics were very aggressive on both ends of the floor right from the get go, building a 25-11 lead after the first 12 minutes of the game. Boston sustained their momentum in the second quarter. Toronto scored 24 points in the second period, but the Celtics tallied 37 to take a commanding 62-35 lead at the half. The defending champions found their rhythm in the second half, but it was little too late, as the Celtics were already in cruise control.

"I mean, we were really active," Celtics head coach Brad Stevens said via ESPN. "We were really just trying to play hard, as hard as we could. They missed a couple of shots. We missed some shots in the first quarter, but we were playing with great purpose. You could feel that from the get-go. So you just hope that you would knock enough in to kind of get something going, and we did. But they're very tough to guard, they got a lot of people to go to."

Jaylen Brown led the Celtics with 27 points to go along with six rebounds and three steals, while Kemba Walker added 21 points on top of seven assists and four rebounds. Jayson Tatum had a double-double with 18 points and 10 rebounds, while Daniel Theis posted 15 points and eight boards. Brad Wanamaker provided spark off the bench with 15 points and three rebounds, while Marcus Smart ended up with 12 points, seven rebounds, and six assists.

Stevens had nothing but praises for Brown for setting the tone for the Celtics, making up for his so-so performance in the previous game. Brown finished with just 14 points on 4-for-18 shooting from the field, including a measly 2-for-11 clip from beyond the arc in their Game 4 loss to the Raptors. But on Monday, the 23-year-old guard scored 16 points in the first half alone, shooting 6-for-11 from the field.

"Jaylen has a big time character," Stevens said. "He’s got competitive character, he works, he’s focused, he wants to do well, and it was good to see him knock in that first one. But I don’t think it would have mattered if he missed a couple early. He was going to be aggressive, and that was good for our team."

Fred VanVleet led the Raptors with 18 points to go along with five assists and three steals, while Norman Powell added 16 points off the bench. Raptors stars Kyle Lowry and Pascal Siakam struggled with only 10 points each on 5-for-9 and 3-for-8 shooting from the field, respectively.

"I am not sure why he has been so out of rhythm since the restart in the bubble," Nurse said via Sportsnet Canada. "He hasn’t had a lot of great games and I think that is more of it other than here we are in the playoffs and he is supposed to be our leading guy. I’m not sure he’s been in great rhythm since the restart and it’s too bad because he was spectacular in last year’s playoffs and spectacular all season long."

The Raptors will look to extend the series when they collide again in Game 6 on Wednesday.