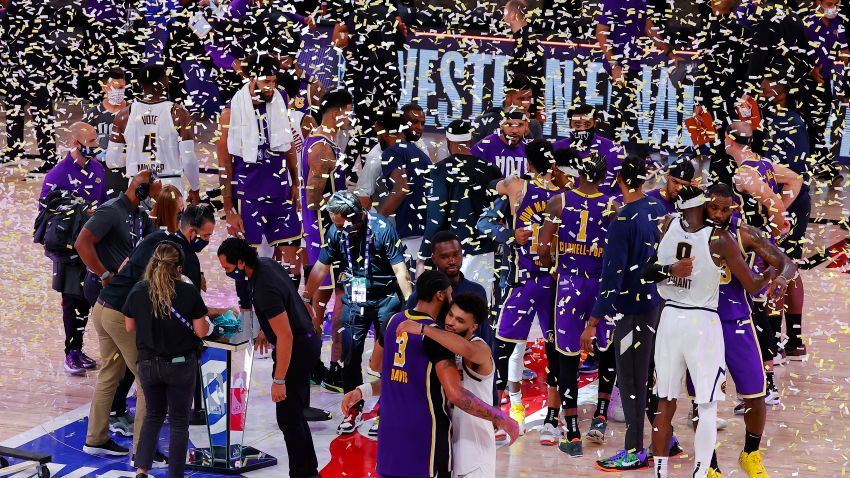 The Los Angeles Lakers are now one step closer to bringing the championship home after advancing to the 2020 NBA Finals on Sunday. The Lakers moved on to the penultimate stage of the season after scoring a 117-107 win over the Denver Nuggets in Game 5 of the Western Conference Finals inside the NBA bubble in Lake Buena Vista, Florida.

The Lakers leaned on the heroics of superstar LeBron James, who had another triple-double performance -- his 27th in the playoffs. The 35-year-old superstar finished with 38 points on 15-for-25 shooting from the field to go along with 16 rebounds and 10 assists. The four-time NBA Most Valuable Player reached the Finals in his second season in Los Angeles, and he reminded everyone that this is what he signed up for back in 2018.

"This is what I came here for," James said via Los Angeles Times. "I heard all the conversations and everything that was said about why did I decide to come to -- it was not about basketball. All those conversations, just naysayers and things of that  nature. I understood that, with the season I had last year and my injury, it just gave them more sticks and more wood to throw in the fire to continue to say the things that      they would say about me."

His newest superstar sidekick Anthony Davis also had another stellar performance for the Lakers, as he finished with 27 points on 8-for-16 shooting from the field to go along with five rebounds, three assists, two steals, and a block. The supporting casts also did their share, as Alex Caruso and Danny Green both ended up with 11 points, while Dwight Howard finished with nine points, nine rebounds, and two blocks in his second consecutive start.

The Lakers were locked in for the entire game and looked poise to finishing the series with a blowout. They built a commanding 72-56 lead early in the third quarter, but the resilient Nuggets struck again. Denver, who have been the comeback kids in the playoffs after erasing game and series leads in the bubble, managed to tie the game at 84 late in the third quarter before Davis made it a three-point game with a conversion from beyond the arc.

Denver continued to put a lot of pressure on the Lakers in the final period, but James eventually took over for Los Angeles. The three-time NBA champion took the matter into his own hands in crunch time, as he finished the game with 16 points in the fourth quarter. James revealed that his teammates told him to bring them to the finals, and he responded to the challenge with his excellent plays down the stretch.

"My teammates said bring us home," James said. "It’s my responsibility to try to make the right plays and do the right things on the floor to help us win ballgames. We have a few guys on our team that’s never been to the Finals before so I took that responsibility as well. My shoulders are wide enough to carry a lot of load."

Nikola Jokic led the Nuggets with 20 points and seven rebounds to go along with five assists and three steals, while Jerami Grant had another stellar night with 20 points and nine boards -- all done while also defending either James or Davis on the other end of the floor. Jamal Murray had 19 points and eight assists, but the rising star guard was far from his explosive form, playing hurt throughout the game.

"I have a big bruise on my foot," Murray revealed via ESPN. "Just hurt me all game. I changed shoes, and that didn't help. Yeah, I have a bone bruise [as well]. I don't like to tell everybody what I got. I just like to play through it. I was in pain, but it's cool. I was out there. I was struggling a little bit today."

Despite losing to the Lakers, Nuggets head coach Mike Malone remains proud of what they have accomplished. The Nuggets erased a 3-1 deficit in the first round against the Utah Jazz, and did the same thing when they fell 1-3 against the Los Angeles Clippers in the second round. Malone said that he'll take solace from losing to a team led by a player who has made playing in the finals a routine.

"LeBron has been here and done that and going to his 10th Finals," Malone said of  James, who worked with when he was a Cleveland Cavaliers assistant coach from 2005-2010. "This is the second time our franchise has ever made it to the Western Conference finals, and then we're playing against a guy who this is routine for him. So we take some solace in that."

The Los Angeles Lakers will be playing in the NBA Finals for the first time since 2010, when they were still led by late superstar Kobe Bryant. While they are in cloud nine after moving one step closer to winning it all this season, James said that they will just enjoy everything on Sunday night and focus again on the task at hand the next day because their job is not done yet.

James told ESPN that winning the Western Conference title this season will not mean a thing if they will not get it done in the NBA Finals. The 16-time All-Star is speaking from experience, as it will be his 10th finals appearance, and his ninth in the last 10 seasons. James had done it with three different franchises, and he also knows that the job gets harder in the Finals after losing in six of his appearances in the grand stage.

"We're going to enjoy it tonight, as we should, because this is not promised every year," James said. "There's only two teams that can advance to the Finals every year. That means pretty much 30 players that only advance every year to the Finals. We're going to enjoy it tonight, but we understand we have bigger fish to fry. We understand there's a bigger goal, but we can't take this for granted because this doesn't happen  every year to anybody."

Davis, who will be making his first trip to the NBA Finals, echoed the statement of James. The 27-year-old has been saying all-season long that he knows the Lakers brought him to Los Angeles for one reason -- ending their title drought. Now that they are just four wins away from accomplishing the goal, Davis said that they have more work to do, knowing that it will not get easier from this point.

"It's good to get something like this accomplished with this group of guys," Davis said. "We battled through a lot this year, starting with the beginning of the season. We know the job's not done. It's a great feeling, but we got four more to win for the ultimate goal. While we enjoy this, we still got work to do."

What's Next for the Nuggets?

The Denver Nuggets are expected to be an intriguing franchise in years to come based on how they performed inside the NBA bubble. While they lost 4-1 in the series against the Lakers, the series was close than what the final tally suggested with most of the games decided by late runs in the fourth quarters of the games.

Nuggets coach Mike Malone feels optimistic about the future of his team, who were tagged as the most resilient team in the playoffs. Their victories in the first two rounds of the playoffs overshadowed the fact that they are still a young team, which makes Malone ecstatic about what they can achieve in the next several seasons.

"I think we have something special brewing," Malone said via The Denver Post. "And I think most importantly, I think people around this country, around the world, who were watching the playoffs, this group of guys, you would be hard pressed to find a better story coming out of this bubble. A bunch of young kids faced elimination, looked it in the face and just kept on surviving and advancing."

The Nuggets are expected to keep the core of their team led by budding stars Nikola Jokic and Jamal Murray. Michael Porter Jr. also showed a lot of his potential in the postseason despite struggling defensively. Monte Morris also proved his scoring prowess in some games, and it was also worth noting that Denver played without Will Barton, who averaged 15.1 points and 6.3 rebounds during the regular season.

Jerami Grant was also a revelation in the playoffs, but it also led to challenges in keeping him for another run next season. Grant will be a free agent if he opts out of his $9.3 million contract next season and is expected to get a lot of suitors. The 26-year-old forward averaged 15.8 points in the Lakers series.