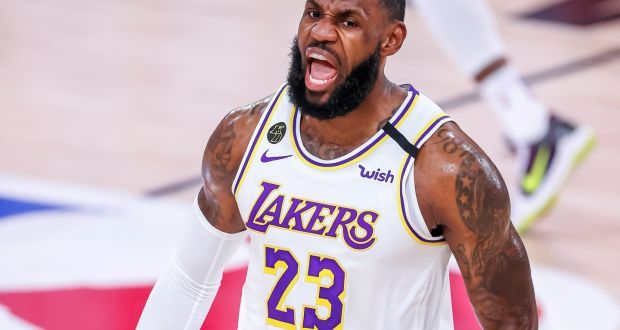 The Los Angeles Lakers took a step closer to reaching their goal this season after clinching a spot in the Western Conference Finals. The Lakers advanced to the conference finals after closing out their second-round series against the Houston Rockets with a 119-96 win on Saturday inside the NBA bubble in Lake Buena Vista, Florida.

LeBron James had a strong night for the Lakers, as he tallied a double-double with 29 points and 11 rebounds to go along with seven assists and two steals. The four-time NBA Most Valuable Player led the Lakers to their first Conference Finals stint since the 2010 NBA Playoffs. James, who also helped the Lakers end their six-year playoff drought, said that bringing the Lakers back to title contention was the reason why he moved to Los Angeles.

"It's the reason I wanted to be a part of this franchise, to take them back to a place  that they were accustomed to being -- and that's competing for a championship," James, who averaged 25.8 points and 10.4 rebounds on top of 7.4 assists and 1.8 blocks in the series, said after the game via ESPN. "It's an honor for me to wear the purple and gold, and for us, we just try to continue the legacy."

The three-time NBA champion knows that expectations are high for them this season after making a huge roster and coaching staff shakeup in the offseason. While they are not considered as consensus favorites to win the title this season, James is aware that their season would be considered a failure if they will not win it all.

"I know what my name, my stature, and what I’ve done in this league comes with whenever I decide to join a franchise," James said via Los Angeles Times. "Either from starting with my first seven years with Cleveland, my four years in Miami, going back to Cleveland four more years and then coming into this franchise. I know what my name comes with. And it comes with winning. I take that responsibility to  the utmost."

James also received a lot of support from his teammates with five other Lakers finishing in double figures. Anthony Davis had a double-double with 13 points and 11 rebounds to go along with four assists. Kyle Kuzma came off the bench to finish with 17 points and four rebounds, while Markieff Morris ended up with 16 points with four-three-pointers. Danny Green posted 14 points, while Kentavious Caldwell-Pope added 10 for Los Angeles.

The Lakers looked determined to close out the series, as they started the game with a 13-2 blitz and led by as much as 22 points in the first quarter, which ended with them on top, 35-20. The Rockets managed to stand toe-to-toe with the Lakers in second period, but the Lakers held on to a 62-51 lead at the half.

Houston trimmed the lead down to seven points early in the third period, but the Lakers had a huge answer, unleashing a huge 15-0 run to regain control of the game. Los Angeles built a 95-69 lead heading into the final period and they never looked back to eliminate the fourth-seeded Rockets.

"Defensively, the way we played, guys being on a string, guys talking, guys covering for each other, just gave us a lot more confidence to put pressure on the ball knowing that someone has your back," Davis said. "The way we finished the last two games in this series is very impactful and it's going to help us through the next round."

James Harden paced the Rockets with 30 points to go along with six rebounds and five assists, while Jeff Green chipped in 13 points. Former NBA Most Valuable Player Russell Westbrook had another rough night for Rockets, as he ended up with just 10 points on 4-for-13 shooting, missing all three attempts from beyond the arc.

The Rockets shot just 37.1 percent from the field, including a measly 13-for-49 clip from beyond the arc. Houston, who opted to go for a small-ball lineup this season, was dominated in the rebounding department, tallying just 31 boards compared to the 50 of the much-taller Lakers squad.

The Lakers will now wait for the winner of the other second-round series between the Los Angeles Clippers and the Denver Nuggets. The Lakers have flipped the switch in the playoffs after going 3-5 in the seeding games. In the first two rounds of the playoffs against the Portland Trail Blazers and the Rockets, Los Angeles lost in the openers of both series but went on to sweep the next four games.

"It just takes a little time to jell," Lakers head coach Frank Vogel said of his team's improvement. "We had four months off and obviously the guys had to get their legs back under them, rhythm and timing, all those types of things," Lakers coach Frank Vogel said. "But the confidence that I've had in this group has been strong all the way through and I'm excited about what we can accomplish going forward, not just what we've accomplished thus far."

The Los Angeles Lakers will have to wait a little bit longer for their next opponent after the Denver Nuggets survived another day in the NBA bubble. The Nuggets forced a deciding Game 7 after escaping with a 111-98 come-from-behind victory over the Los Angeles Clippers in Game 6 of their best-of-seven series.

Nikola Jokic had another remarkable performance for the Nuggets, posting a double-double with 34 points and 14 rebounds to go along with seven assists. The superstar center earned praises from Nuggets head coach Mike Malone for showing tremendous composure down the stretch for the Nuggets, whose backs are against the wall in the series after falling into a 3-1 hole similar to their first-round series against the Utah Jazz.

"Nikola is a guy that never gets rattled. He never looks desperate," Malone said of  Jokic, who knocked down key three-pointers and one-legged fadeaways in the second half for Denver. "There's no, 'OK, he looks like he's losing his poise' and now everybody else does. He's just a picture of calmness, of steadiness, and then he puts the team on his back and makes some of the plays he makes."

Jamal Murray also played with a lot of heart for the Nuggets. The superstar point guard grimaced in pain after a collision with Paul George in the third quarter, but he managed to finish the game, declining to come out of the game. The 23-year-old guard ended up with 21 points on 9-for-13 shooting from the field.

Garry Harris had a productive night for the Nuggets with 16 points on top of four assists and four steals, while Michael Porter Jr. and Monte Morris added 13 and 10 points, respectively for Denver, who had to erase a huge second-half deficit for the second straight game. The Clippers led by as much as 19 points in the third period, but the Nuggets slowly chipped into the lead, outscoring Los Angeles, 64-35, in the second half.

"We weren't down on ourselves," said Malone, whose team erased a 16-point deficit in Game 5 to extend the series. "We knew what it was going to take to get out of that hole. I am running out of adjectives, superlatives, whatever you want to call it, to speak on our team. Because that is a tough, resilient group of you know what. I love our team."

Paul George led the Clippers with 33 points on top of six rebounds and five steals, while Kawhi Leonard ended up with 25 points and eight rebounds. Lou Williams finished with 14 points off the bench, while JaMychal Green contributed 11 points for the Clippers. Los Angeles, known as one of the best defensive teams in the league, allowed the Nuggets to shot 54.1 percent from the field and 48.0 percent from beyond the arc.

While they are on the verge of blowing a 3-1 lead in the series, George said that they are not pressing the panic button. The 30-year-old guard admitted that it will not be easy because the Nuggets are thriving under pressure and have already experienced winning a Game 7 in the bubble. However, George still feels that they are in the driver seat, heading in to the do-or-die match on Tuesday with the winner facing the Lakers on Friday.