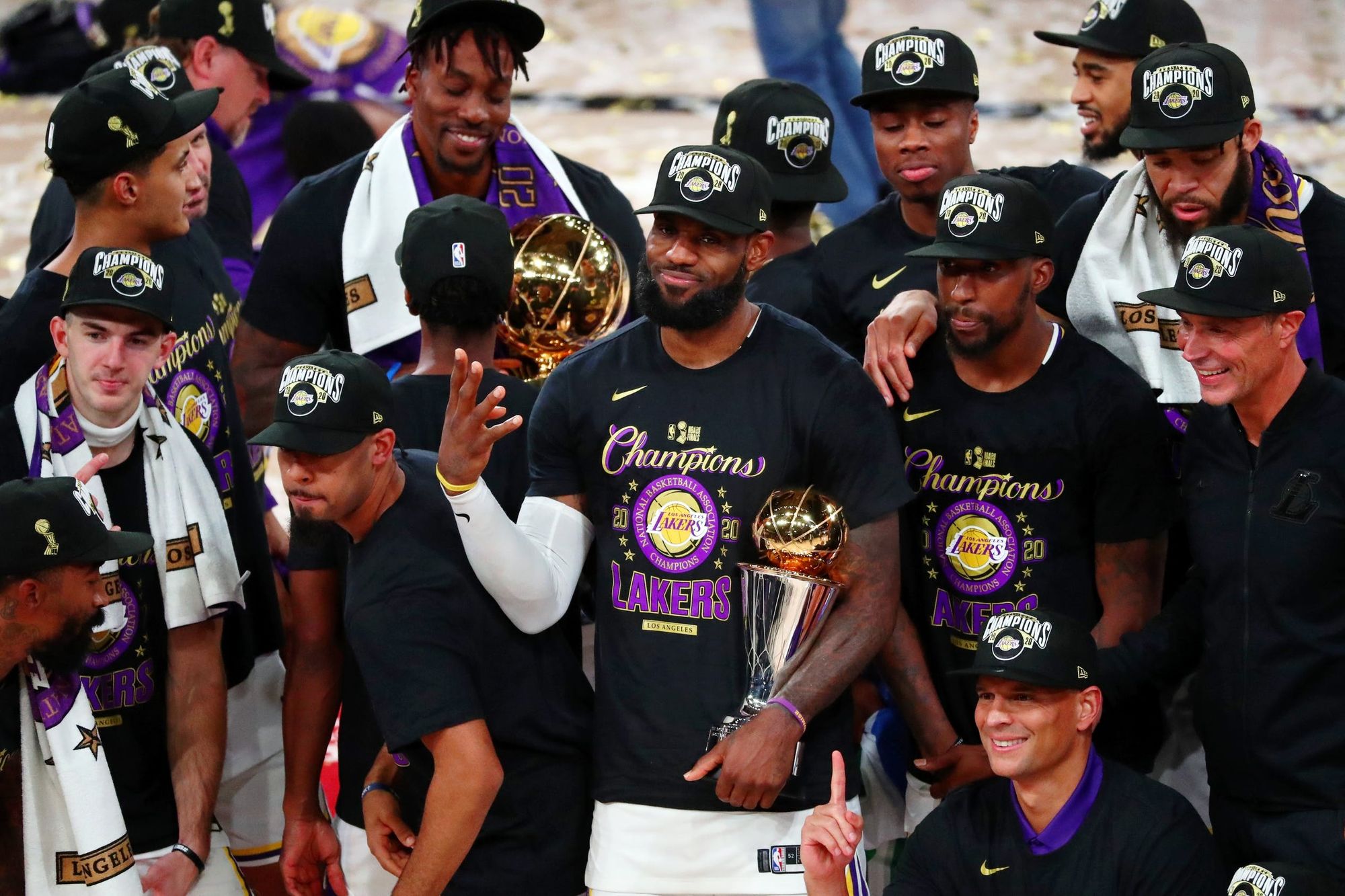 It took another game and different uniform, but the Los Angeles Lakers finally completed their mission this season, as they captured the 17th championship in franchise history. The Lakers dominated from start to finish en route to a masterful 106-93 win over the Miami Heat in Game 6 of the 2020 NBA Finals on Sunday night inside the bubble in Lake Buena Vista, Florida.

LeBron James had another remarkable performance for the Lakers, tallying a triple-double with 28 points on 13-for-20 shooting from the field to go along with 14 rebounds and 10 assists. His triple-double performance came a game after he tallied 40 points and 13 rebounds in a losing effort in Game 5. But this time, the four-time NBA Most Valuable Player did not let the title slip away from their hands, carrying the Lakers on his shoulders.

"He's the greatest player the basketball universe has ever seen, and if you think you  know, you don't know, OK, until you're around him every day," Lakers head coach Frank Vogel said of James via ESPN. "You're coaching him, you're seeing his mind, you're seeing his adjustments, seeing the way he leads the group. You think you know, but you don't know. It's just been a remarkable experience coaching him."

James also got the much-needed support to close out the series and earn the fourth championship of his career. His main sidekick Anthony Davis played with a heel injury, but the superstar forward responded to the challenge, as he finished with 19 points and 15 rebounds to go along with three assists and two blocks. The 27-year-old forward wanted to be a Laker to win a title, and he has now accomplished it.

Veteran point guard Rajon Rondo also had a vintage performance for the Lakers, as he tallied 19 points on 8-for-11 shooting to go along with four rebounds and four assists. The 34-year-old point guard provided a huge lift off the bench for the Lakers, and the badly-needed leadership in a game that they cannot afford to lose. With the win, Rondo secured his second NBA ring with the first one coming in 2008 with the Boston Celtics.

Kentavious Caldwell-Pope also had another productive night for Los Angeles with 17 points and two rebounds, while Danny Green, who has been hit in social media after missing the potential game-winner in Game 5, bounced back with 11 points and five rebounds, hitting three of his seven attempts from beyond the arc. Alex Caruso scored just four points and dished out five assists, but his defense was huge for the Lakers since the opening quarter.

"It was attention to detail, the way we were locked in tonight, especially on the defensive end," Rondo said via Los Angeles Times. "We didn’t make too many mistakes tonight. And when we did, we quickly corrected it. And defensively it was all five guys. Coach’s game plan was right on point and we knew if we put it together for 48 minutes, we’d be able to come out and have a defensive game like we did tonight."

Holding a huge 64-36 lead at the half, the Lakers did not look back in the third period, where they led by as much as 36 points to completely take the fight out of the Heat. Vogel, who opted to start Caruso to have a better backcourt defense, had nothing but praises for his players, who bought in to their game plan.

"Our guys saw the value very early on," Vogel said of working together to suffocate their opponent through their defense. "They bought in and the first three quarters, I’m just super proud of our guys. We were all over the place. We executed our coverages perfectly and we did it with energy and passion and active hands, and we rebounded the basketball and that controlled the whole game. Just very, very proud of our defensive performance tonight."

Davis was the main anchor with his vaunted interior presence, while James also rose up to the challenge, as he hounded Heat superstar Jimmy Butler right from the opening quarter. Butler, who tallied 35 points on top of 12 rebounds and 11 assists in Game 5, was limited to just 12 points on 5-for-10 shooting from the field. Bam Adebayo led Miami with 25 points and 10 rebounds, while Jae Crowder chipped in 12 points and four boards.

LeBron James might have failed to win the fifth NBA Most Valuable Player award of his career after losing out to Giannis Antetokounmpo, but the superstar forward had the last laugh. James, now a four-time NBA champion, was named as the 2020 NBA Finals MVP, edging fellow superstar Anthony Davis.

James was a man on a mission in the Finals, as he averaged 29.8 points and 11.8 rebounds to go along with 8.5 assists and 1.2 steals per game. It was the fourth NBA Finals MVP award for James, and he remarkably did it with three different franchise -- the first player to accomplish the feat. James won it with the Miami Heat in 2012 and 2013, and with the Cleveland Cavaliers in 2016, but he said that this year's run was special.

"This was very challenging, and very difficult," James said via ESPN. "It played with your mind, and it played with your body. You're away from some of the things you're so accustomed to that make you the professional you are. This is right up there with one of the greatest accomplishments I have."

James admitted that the rumblings about his greatness fueled his desire to bring a 17th championship to the Lakers franchise. Some NBA experts said that James signed with the Lakers for non-basketball reasons, but he was able to prove them wrong despite failing to make the playoffs last season when he missed a significant amount of games due to injury. James also insisted that he was locked in when he decided to join the Lakers in the bubble.

"It's probably been the most challenging thing I've ever done as far as a professional, as far as committing to something and actually making it through," James said. "But I'm here for one reason and one reason only, and that's to compete for a championship. That was my mindset once I entered the bubble. I've been as locked in as I've ever been in my career."

The 35-year-old superstar also declared that he is not done yet, as he is still eager to win more championships in the remaining years of his career. His partnership with Davis, who is arguably the best big man in the league at this point, would put James in a good position to win a fifth title next season. Davis could become a free agent this offseason, but it is widely-believed that he will sign a max contract to stay in Los Angeles.

Miami Heat superstar Jimmy Butler admitted that losing in the Finals was a tough pill to swallow for him, but he remains optimistic of his team's future. Butler said that he will be motivated than ever, revealing that he promised to win a championship for the franchise. They fell short this season, but the superstar guard vowed that he will fulfill his promise to Heat president Pat Riley and head coach Erik Spoelstra.

"This is what my team needed me to do, the organization asked of me," Butler, who moved to Miami last offseason, said via ESPN. "I told them that I would win them one and I didn't hold up my end of the bargain, so that means I got to do it next year. I told Coach Pat, I told Coach Spo I'm here to win one. I didn't do my job, so moving forward, I got to hold up my end of the bargain."

Butler's first year in Miami was a huge success for him and the franchise. Not a lot of people expected that the Heat would come out of the Eastern Conference, but they defied the odds. After beating the Indiana Pacers in first round of the playoffs, the Heat shocked the world when they eliminated Eastern Conference favorites Milwaukee Bucks in five games in the second round before beating the Boston Celtics in the conference finals.

Spoelstra has been very vocal that Butler is the main reason why they were able to move two wins away from getting the championship. The two-time champion coach previously raved about Butler being the ultimate two-way player. And following their loss on Sunday, Spoelstra did not change his tone, praising the competitiveness of his superstar, who averaged 26.2 points, 9.8 assists, and 8.3 rebounds in the Finals.

"Jimmy has a superstar competitive spirit to him," Spoelstra said. "If you try to evaluate him or put him in a conventional box of how you view a modern-day basketball player, you're totally missing the boat on JB. He is a winner, he is a leader, he is a motivator, a mentor and just a supreme competitor."

Heat fans will see a lot of Butler in years to come, as he still has three seasons left in his four-year, $140.79 million contract with Miami. It remains to be seen how Miami will tweak their roster in the offseason, but the Heat are expected to be a force with him leading the way for them.