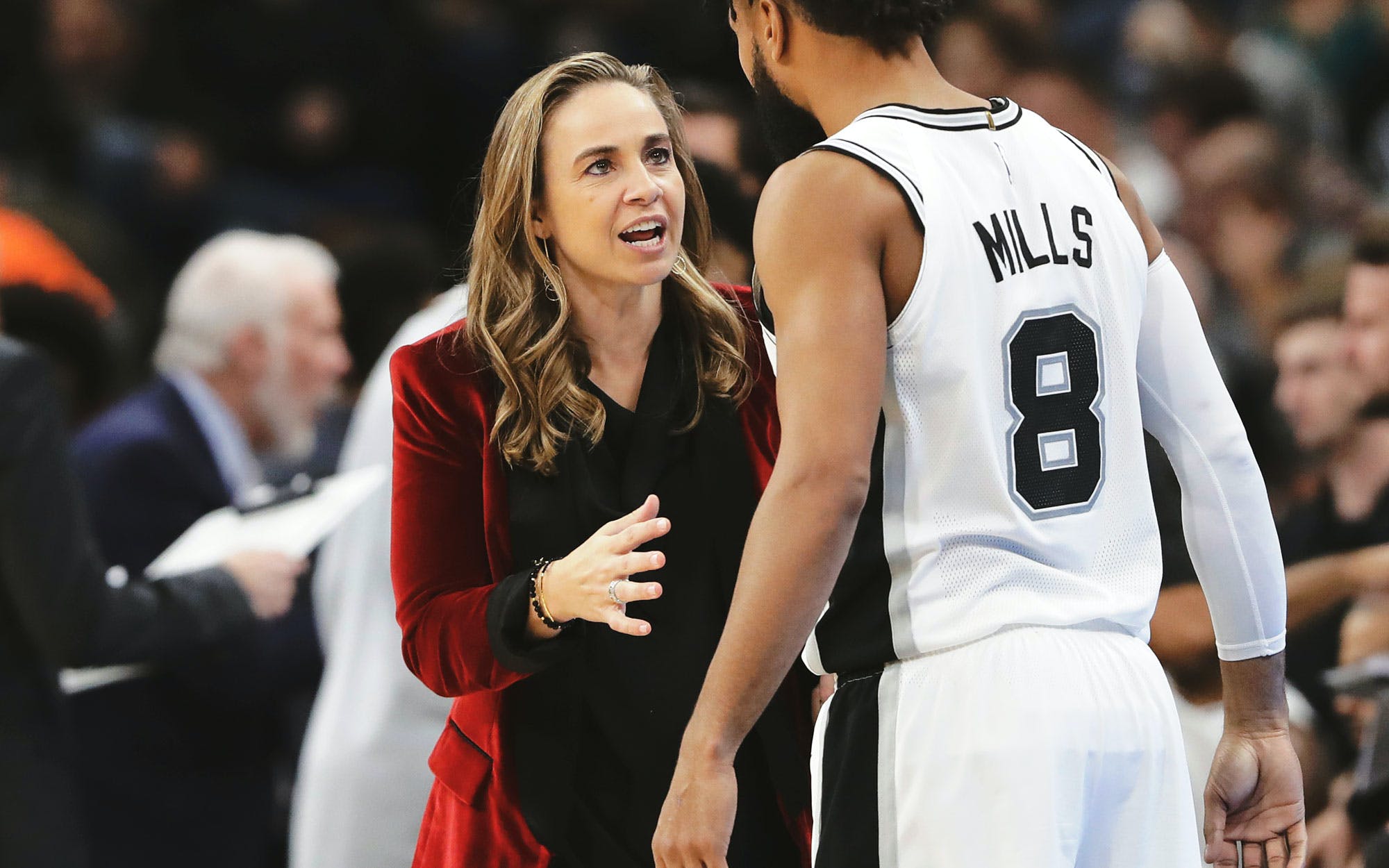 San Antonio Spurs assistant coach Becky Hammon had a historic night, but the Los Angeles Lakers spoiled the party. The Lakers ran away with a convincing 121-107 road win over the Spurs on Wednesday night at the AT&T Center in San Antonio, Texas.

LeBron James continues to show his deadly form, as the four-time NBA champion finished with 26 points to go along with eight assists and five rebounds. Like Hammon, James also had a record night, as his 26-point output was the 1,000th consecutive game that he scored more than 10 points in a game. It also happened on his 36th birthday, and James said it is a testament to how he is preparing his body for the season-long grind.

"I just go out there and try to prepare and be the best every night I step on the floor," James said via ESPN. "If I'm in uniform, I've got to do things that help our team win. If it's scoring, rebounding, defending,  assisting, doing little things. Just be available for my teammates throughout the course of the game when I'm on the floor, also on the bench. And I've been fortunate enough to do that throughout my career for the majority of it."

Dennis Schroder also had a productive night for the Lakers, as the starting point guard finished with 21 points on top of four rebounds and four assists. Anthony Davis also did a lot of damage with 20 points and eight rebounds to go along with three assists and two blocks for the Lakers.

Wesley Matthews, one of the free-agency acquisitions of the Lakers in the offseason, had his best game in a Lakers uniform. The 34-year-old guard, who averaged just two points in their first four games, scored 18 points on a perfect 6-for-6 shooting from the field, all from the three-point region. Montrezl Harrell also provided a lift off the bench with 10 points and nine rebounds, while Kentavious Caldwell-Pope chipped in 10 points as well.

On the other hand, Dejounte Murray led the Spurs with 29 points on 12-for-19 shooting from the field to go along with seven rebounds and seven assists. Veteran guard DeMar DeRozan finished with 23 points on top of six assists and five rebounds, while Patty Mills produced 12 points and four assists off the bench for the Spurs, who lost head coach Gregg Popovich in the second quarter.

Popovich was ejected in the second quarter, which led to the monumental night for Hammon. Hammon took over the coaching job and became the first woman to assume head-coaching duties in an official NBA game in league history. Although it ended in a loss, Hammon admitted that it was a big deal for her, as it was a product of her hard work and long relationship with the San Antonio Spurs franchise dating back to her days in the WNBA.

"I have a lot of time invested and they have a lot of time invested in me in building me and getting me better," Hammon said via Los Angeles  Times. "Honestly, in the moment, I was just trying to win the game. I say this a lot, but I try not to think about the huge picture and the huge aspect of it because it can get overwhelming. It’s my job to go in there and be focused for those guys and make sure that I’m helping them do the things that will help us win. I really have not had time to reflect."

James also took time to praise Hammon for the work that she has done from being the main gunner of the San Antonio Silver Stars in the WNBA to becoming one of Popovich's assistant. Although they won against the Spurs, the four-time NBA Most Valuable Player said that Hammon did a great job in keeping the Spurs in the game after losing Popovich in the second period of the match.

"She's been paying her dues over the last few years and coach Pop has           given her the opportunity to first of all be the coach of the summer               league team," James said of Hammon. "She got going with that, and then     being the interim head coach if anything ever happened to Pop. Tonight      was a case where she got to step in and show her work, show her talents and her love for the game."

The Spurs, who have now lost in the last two games after winning their first two assignments of the season, will look to get back at the Lakers when they face each other again on Friday at the AT&T Center. The Lakers, on the other hand, improved to 3-2, bouncing back from their 115-107 loss to the Portland Trail Blazers on Monday.

Kawhi Leonard made his return from a two-game absence and his presence was immediately felt, helping the Los Angeles Clippers score their second-straight win since the 51-point loss to the Dallas Mavericks. The Clippers cruised to a 128-105 win over the Portland Trail Blazers on Wednesday at the Staples Center in Los Angeles.

Leonard, who missed the last two games after getting eight stiches in the mouth after getting bloodied by an inadvertent elbow hit from Serge Ibaka, was a little rusty early in the game. However, Leonard found his rhythm in the third quarter to score 16 of his 28 points, and also finished with seven assists, three rebounds, three steals, and a block in 30 minutes of action against the Trail Blazers.

"I thought early on, especially in the first half, he was a little tired, a little winded," Clippers head coach Tyronn Lue said of Leonard via ESPN. "I thought in the third quarter, he really pushed himself and start attacking the paint, started playing with force and playing with pace, so I thought he got his second wind. He really took over that third quarter and built the lead for us."

Paul George also had another efficient night for the Clippers, finishing with a double-double with 23 points and 10 rebounds on top of seven assists and two steals. Lou Williams was a spark off the bench anew with 15 points and five rebounds in 21 minutes, while veterans Serge Ibaka, Nicolas Batum, and Reggie Jackson added 11 points apiece for the Clippers against the Trail Blazers.

"We’re just playing really good basketball, we’re playing trusting    basketball," Williams said of their performance after the game via Los Angeles Times. " We know we have a lot of guys who are capable and we’re just playing with trust and playing freely."

CJ McCollum paced the Trail Blazers with 25 points on 8-for-17 shooting from the field with seven three-pointers to go along with four rebounds, three assists, and a steal. Damian Lillard struggled from the field and shot just 3-for-14 with no three-pointer to finish with 20 points. Carmelo Anthony came off the bench to add 15 points and five rebounds, while Enes Kanter posted 10 points and 10 boards for Portland, who dropped to 2-2 this season.

Charlotte Hornets rookie LaMelo Ball had the best game of his young career. Ball, the third overall pick in the 2020 NBA Draft, led the Charlotte Hornets to a convincing 118-99 victory over the Dallas Mavericks on Wednesday night at the American Airlines Center in Dallas, Texas.

Ball still came off the bench for Charlotte and provided a huge lift, as he finished with 22 points and eight rebounds in 29 minutes. The 19-year-old point guard shot 7-for-10 from the field, including a 4-for-5 clip from beyond the arc. Ball also grabbed eight rebounds and dished out five assists for the Hornets.

"LaMelo’s showing growth every single game," Hornets head coach James   Borrego said of the performance of his rookie guard via USA Today. "He had his fingerprints all over that game, playing with poise, confidence.  He was a calming force out there for us."

Mikal Bridges was also a huge presence off the bench for Charlotte, posting a double-double with 20 points and 16 rebounds to go along with two assists and two blocks. Terry Rozier had 18 points on top of five rebounds and three assists, while fellow starters Gordon Hayward and PJ Washington added 11 points each for the Hornets, who got 60 points from their second unit against Dallas.

"The bench was fantastic tonight starting with Miles Bridges," Borrego  added. "His energy is infectious. He’s getting better. I’m proud of him  just how he’s handled this season, his role. He impacts the game every second he’s on the floor. I’m really proud of him. Our bench is a strength of ours moving forward. I believe our bench is one of the best pieces of this team."

Luka Doncic, who is forced to carry a lot of load with Kristaps Porzingis still down with a knee injury, struggled against the Hornets, finishing with just 12 points on 4-for-10 shooting from the field. Tim Hardaway Jr. led the Mavericks with 18 points, while Jalen Brunson and Maxi Kleber added 16 and 12 points, respectively, off the bench.