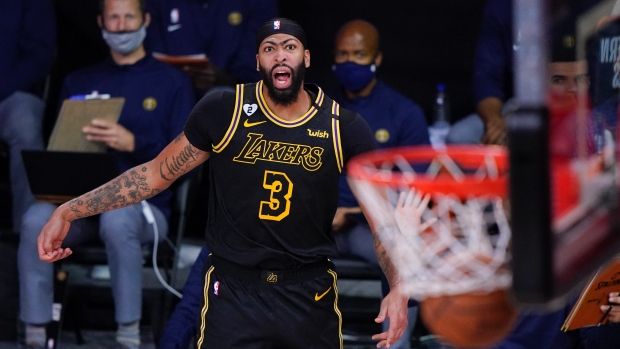 Anthony Davis knew that the Los Angeles Lakers are expecting big things from him when they surrendered a lot of assets to trade for him, and the superstar forward responded big time on Sunday. Davis knocked down a buzzer-beating three-pointer to lead the Lakers to a 105-103 win over the Denver Nuggets in Game 2 of the 2020 NBA Western Conference Finals inside the bubble in Lake Buena Vista, Florida.

The Nuggets were just 2.1 seconds away from tying the series, but Davis had other plans in mind. The 27-year-old superstar hit a three-pointer at the buzzer to help the Lakers avoid a monumental collapse. After hitting the big-time game-winner, Davis yelled "Kobe" as a tribute to the late Lakers superstar. After the game, Davis said that the win means a lot to them because they are wearing the Black Mamba jersey that Bryant designed before.

"I mean, obviously wearing the jerseys. He's hit countless shots like that to win games, whether it's in the playoffs, Finals," Davis said. "But it was a special one for me. Special one for my teammates. I told 'Bron, in L.A., right before the hiatus against the Brooklyn Nets, same spot, slightly different play and I missed a shot. I was upset with myself. And he said, 'Man, we gonna live or die with you shooting that shot.' I got the same opportunity tonight."

The big shot from Davis came after the Nuggets unleashed another huge fight back, similar to what they did in their last three games against the Los Angeles Clippers in the second round of the playoffs. Los Angeles led by as much as 16 points in the second half, but the Nuggets showed resiliency anew, slowly erasing the lead until they eventually took the driver seat, 87-86, with almost seven minutes left to play in the game.

The Nuggets appeared poise to hold on to the momentum that they gained, as Nikola Jokic took the matter into his own hands. The Serbian superstar scored the last 11 points of the Nuggets, including a putback that gave Denver a 103-102 lead with 20.8 seconds left to play in the game. Denver managed to foil the offensive attack of the Lakers in the next possession but the Lakers had another 2.1 seconds to setup another play. Rajon Rondo was inserted into the game, and delivered the assist to Davis' buzzer-beating three-pointer.

"We want to embody what Kobe Bryant stood for and honor his memory," Lakers head coach Frank Vogel said. "There are certain games where we are going to feel it a little bit more than others. When we have that uniform on, I think we feel it more  than others. That's a shot Kobe Bryant would hit. To me, AD coming off just flying to the wing like that, catch-and-shoot with the biggest game on the line of our season,nothing but net, it's a Mamba shot."

Davis finished with 31 points and nine rebounds to go along with two assists and two blocks. LeBron James was also on target on Sunday night, tallying a double-double with 26 points and 11 rebounds to go along with four assists and two blocks, while Danny Green and Kentavious Caldwell-Pope added 11 points apiece. Alex Caruso chipped in nine points off the bench, while Rondo ended up with just three points but had nine assists and four rebounds.

Jokic led the Nuggets, as he finished with 30 points and nine assists to go along with four steals. Jamal Murray ended up with 25 points and six rebounds on top of four assists and two steals, while Michael Porter Jr. contributed 15 points for the Nuggets off the bench, who shot just 8-for-24 from beyond the arc in Game 2.

"Losing sucks," Nuggets head coach Michael Malone said after the game via ESPN. "That's the bottom line, losing sucks. Some guys like to win, some guys hate to lose. I think we're a group of guys that hate to lose. Whether it be by 20-something points in Game 1 or at the buzzer tonight, counts as the same."

The Nuggets will look to bounce back and avoid falling into a deep 3-0 hole in Game 3 on Tuesday. Denver is no stranger to being down in a series this season, as they came back from 3-1 deficits in their first-round showdown with the Utah Jazz and in their second-round matchup with the Clippers. Jokic said, though, that they need to show more effort if they want to erase the 2-0 lead of the top-seeded Lakers.

"I mean, we are here as underdogs," Jokic said of their chances against the Lakers. "That is how you say, underdogs? I mean, we need to fight. That's our only chance. They were up 15, isn't it, or 16? I don't know how much they were up. We could just call it a game and quit. I think we just want to give the fight. Maybe it's going to be 30 points, but fight needs to be there, and effort."

Gordon Hayward to Make a Sacrifice for Boston Celtics

The Boston Celtics are currently in a tough fight against the Miami Heat in the Western Conference Finals, as they are currently facing a 2-1 deficit in the series. Good thing for the Celtics, veteran forward Gordon Hayward will make a sacrifice for the team, as he decided not to leave the bubble again. Hayward was supposed to leave the bubble for the birth of his child, but the former Butler standout said that he already had an agreement with his wife, Robyn.

"A little bit lucky that Robyn was already there in Indy, so I was able to be at home and get great treatment," Hayward said via USA Today. "But that wasn’t in the plan. Robyn could be having a baby at any point in time. It’s probably something I’ll be here. By the time I get back, I might miss the birth if she goes in and she rushes to the hospital. We discussed it and we prayed about it. I think it’s probably best if I stay here and help our team."

Hayward made his return to the lineup on Saturday in Game 3 of the 2020 NBA Eastern Conference Finals. The 30-year-old forward missed the majority of the playoffs after suffering a Grade 3 ankle sprain in their first-round series against the Philadelphia 76ers, who were eventually swept by Boston.

Hayward played 31 minutes off the bench against the Heat in Game 3, where he finished with just six points and five rebounds to go along with four steals and three assists. While his numbers do not look impressive, Celtics head coach Brad Stevens said that Hayward's return gave them a huge boost because of how the veteran stabilizes them on both ends of the floor.

"He did what he's done all year," Stevens said of Hayward. "He didn't shoot it quite as much, but he is a stabilizing force for our team. He just can make the right play and make a play for somebody else at the right time."

Jayson Tatum, who has been carrying a lot of load for the Celtics in the playoffs, could not hide his excitement over Hayward's return. Tatum reiterated that they are completely a different team with Hayward on the roster because it gives them another versatile player who can impact the game without scoring too much.

Paul George in a Tight Spot in Los Angeles Clippers

Paul George made a lot of headlines for the wrong reasons in this year's NBA Playoffs. George was criticized mostly because of his inconsistent performance in the postseason until the Clippers were eliminated by the Denver Nuggets in the second round of the playoffs.

Following their loss to the Nuggets, George reportedly tried to convince his teammates during a speech that they should stay committed to the team and be ready for another title run next season. While his intentions are clear, his teammates did not respond positively to his remarks, per Shams Charania of The Athletic.

"Multiple teammates had verbal spats with George throughout the postseason, citing in their exchanges a lack of accountability from him," Charania said. "In the postgame locker room Tuesday night, George was preaching to teammates to remain committed, for all the players to return to the team this offseason and stay ready to make another run. It was met by some eye rolls and bewilderment, sources said."

The reactions of his teammates were reportedly based on how George failed to back up his words with his performance in the playoffs. George failed to produce on a consistent basis for the Clippers, and was often blamed every time the Clippers will lose a game. In Game 7 of the second round against the Nuggets, George had a miserable night, finishing with just 10 points on 4-for-16 shooting from the field.