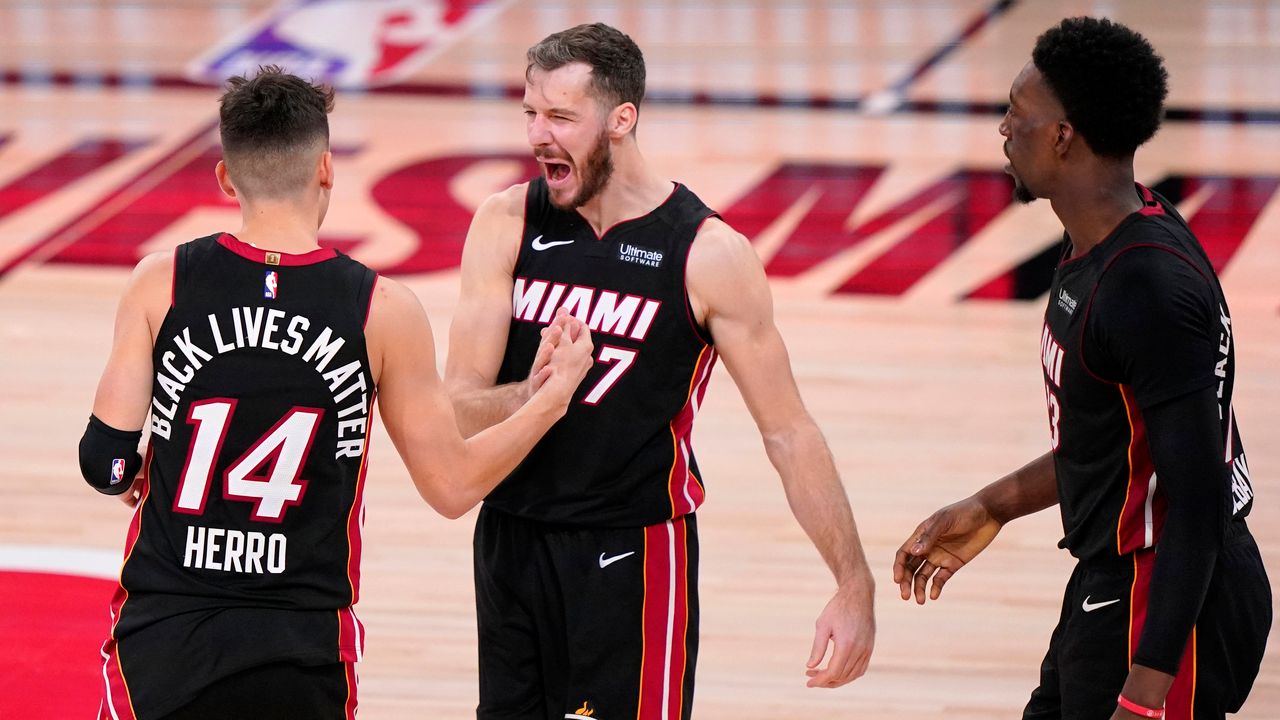 The Miami Heat are now one win away from reaching the NBA Finals for the first time since 2014 or in the post-Big Three era of LeBron James, Dwyane Wade, and Chris Bosh in South Beach. The Heat now hold a 3-1 lead in the 2020 Eastern Conference Finals after scoring a 112-109 win over the Boston Celtics in Game 3 of their best-of-seven playoff series inside the NBA bubble in Lake Buena Vista, Florida.

Rookie guard Tyler Herro played the hero's role for the Heat, as he came off the bench and erupted for 37 points on 14-for-21 shooting from the field, including a 5-for-10 clip from beyond the arc. The 20-year-old also posted six rebounds and three assists, earning praises from Heat head coach Erik Spoelstra, who said that Herro's success is a product of his tremendous work ethic.

"I think everybody over estimates what you can do in a day and what you can do in months of work and sweat and grind when nobody is watching," Spoelstra said via Miami Herald. "He is relentless with his work ethic. Nobody was paying attention to us during the year. He had a lot of tough moments. He did. He had some moments where it was up and down and learning about our demands on defense."

Herro has been a constant spark off the bench for the Heat this season, particularly in the playoffs. In the first two rounds of the playoffs, Herro averaged 15.8 points and 4.8 rebounds for the Heat. The former Kentucky standout stepped it up a notch in the Eastern Conference Finals against the Celtics, posting 20.5 points to go along with 7.3 rebounds and 5.3 assists per game.

Herro credited Heat superstar Jimmy Butler for his success this season, saying that the veteran has taught him a lot of things, which helped him do what he has been doing for the Heat this season. Butler, for his part, did not take the credit and pointed out that the rookie guard has been playing excellently all-season long, and his recent performances are just magnified because of the what is at stake.

"I think he has been playing this way for a long time," Butler said. "He’s comfortable. He picks his spots. He works on everything that you see him do in the game, in the pick-and-roll and the iso situation. I think the game slowed down for him a long time ago. Now, he’s just playing at an incredibly high level. Y’all see it now because of where we are in the playoffs. But he has been doing this year-long now, and we want him to continue to play that way."

Bam Adebayo also had another solid night for the Heat, posting a double-double with 20 points and 12 rebounds to go along with four assists and two steals. Butler also had a productive night 24 points on top of nine rebounds and three assists, while Goran Dragic ended up with 22 points, five rebounds, three assists, and two steals for the Heat, who were ahead for the majority of the game.

The Heat took control of the game from the second quarter, but the Celtics managed to fight back in the fourth quarter. Following a basket from Daniel Theis, the Celtics went ahead 85-84 to take their first lead since the 11:19 mark of the second quarter. However, it did not last long for Boston, as Herro took over, scoring 12 points in the final eight minutes of the game to give the Heat a commanding 3-1 series lead.

"Herro's shot-making tonight was the difference in the game," Celtics coach Brad Stevens said after the game via ESPN. "Jimmy was great late. Adebayo was his typical self. Dragic made some big plays. But Herro was ridiculously good tonight. That rim must have looked like the ocean to him."

Jayson Tatum led the Celtics with 28 points and nine rebounds to go along with four assists and three blocks. However, Tatum was visibly frustrated of his performance after going scoreless in the first half, failing to help the Celtics build confidence in the first two quarters. The 22-year-old forward went 0-for-6 in the opening half and went 10-for-122 for the entire game, including a 4-for-11 clip from behind the arc.

Despite being down 3-1 in the series, Stevens is not ready to waive the white flag. He insisted that he is not thinking of the odds against them or how other teams recently came back from being down 3-1 in a series, saying that the Celtics will take it one game at a time starting in Game 5 on Friday. Stevens believes that they can still turn the series around, and move to the NBA Finals.

Bam Adebayo to Play in Game 5 After Injury Scare

Miami Heat fans were held their breath when starting center Bam Adebayo was seen holding onto his left arm late in the fourth quarter of Game 4. There were questions about his availability for the possible series clincher on Friday, but Heat head coach Erik Spoelstra revealed the Adebayo will be good to go. The two-time NBA champion coach said that Adebayo has no specific injury and is just banged up in the physical series.

Adebayo also played the injury concerns on Wednesday after their Game 4 win, declaring that he is good and it was just a "wrong turn, wrong little movement" that caused the pain. The 23-year-old has been an integral part for the Heat in the postseason, where is currently averaging 17.8 points and 11.5 rebounds. In the first four against Boston, the former Kentucky big man posted 21.5 points, 11.0 rebounds, 4.5 assists, 2.0 steals, and 1.3 blocks per game.

While the Miami Heat are now just a win away from entering the biggest stage of the 2019-2020 NBA season, veteran guard Andre Iguodala also has a personal milestone in sight. Iguodala is also now one victory away from a return trip to the NBA Finals, which has been a very familiar territory for the 36-year-old veteran.

Iguodala has played in the NBA Finals in each of the last five seasons -- all with the Golden State Warriors. The former Arizona standout won three championships with the Warriors in the last five seasons, including the 2015 title, where he was named NBA Finals MVP for the first time in his career. He is not playing a huge role like what he was accustomed to in Golden State, averaging just 18.8 minutes in the playoffs this season, but he is not bothered at all.

"I’ve seen it at all levels, high levels, and no matter if I’m the main guy, franchise player, or I’m one of the guys coming off the bench, just being a veteran player, being a role player, it’s a different way of being all in," Iguodala said via the South Florida Sun Sentinel. "It may not just be production, but it may be in terms of being a leader and being a good veteran, being a good teacher, helping the guys through the tough times, helping them improve, giving them that confidence at the same time, giving them encouragement."

The Warriors and Iguodala had to part ways in the summer of 2019 after their failed title bid against the Toronto Raptors. Golden State lost Kevin Durant in free agency and Klay Thompson due to injury, forcing the Warriors to look for additional offensive firepower. Golden State traded Iguodala to the Memphis Grizzlies to make room D'Angelo Russell. Russell was eventually dealt to the Minnesota Timberwolves, while Iguodala moved to Miami.