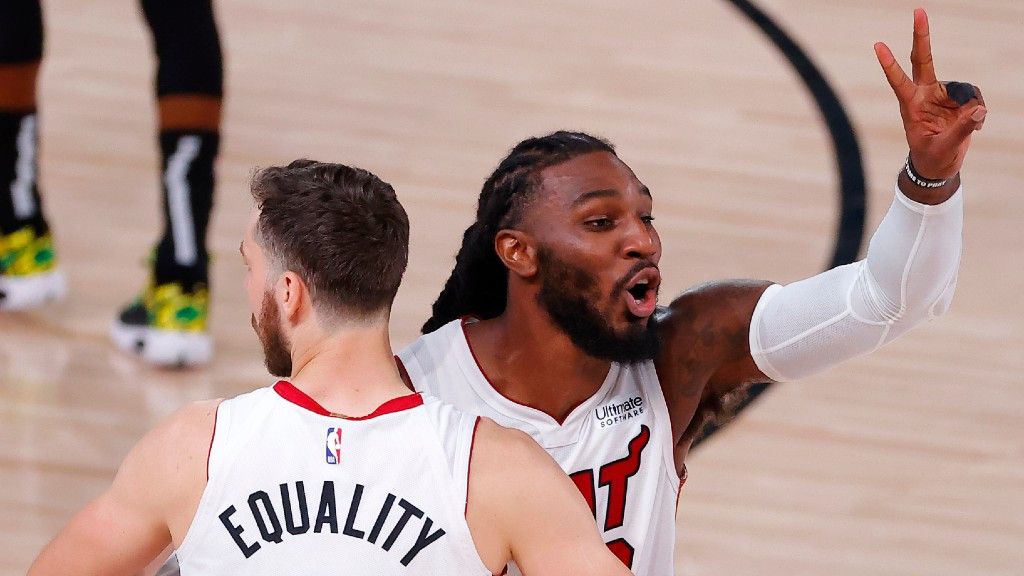 The Miami Heat are now two wins away from making the NBA Finals after scoring another come-from-behind win. The Heat erased another huge lead for the second consecutive game to take a 106-101 victory over the Boston Celtics in Game 2 of the 2020 NBA Eastern Conference Finals to take a 2-0 lead in the series.

Goran Dragic continues to impress for the Miami Heat, as the veteran point guard finished with 25 points to go along with five assists and three rebounds. Bam Adebayo also had a productive night, posting a double-double with 21 points and 10 rebounds to go along with four assists, two steals and a block.

"We believe in one another," Butler said via ESPN. "We know what we're capable of. And I think that's the part that's so fun, when we're out there hooping. Yeah, we get down at times -- but we never hang our heads -- because we know if we play the right way, we give ourselves a chance to win."

The Celtics looked poise to even the series after building a 13-point lead at half and led by as much as 17 points late in the second period. However, Miami looked like a different team when they came out from the locker room after the break, making big plays on both ends of the floor. They scored 37 points in the third period and limited the Celtics to just 17 points to take a seven-point lead heading into the final period.

Boston recovered in the fourth period and regained the lead, 94-89, with 4:25 left in the game after unleashing a 15-2 run capped by a three-pointer from Kemba Walker. However, the Heat had the last laugh, as they ended the game with a 17-7 rally to complete yet another remarkable comeback. It was the same story in Game 1, where the Heat erased a 14-point deficit to take the series-opener.

"Man, we got grit," Adebayo said after the game. "That's about all I can tell you. We  got grit, man. I'm happy to be on this team with these guys because everybody in here has a different story. We all come from nothing, and that's what's beautiful about this team, man. You put guys that come from nothing together, and they have a vision, and we're just trying to foresee that vision."

Kemba Walker led the Celtics with 23 points to go along with seven rebounds and two steals. Jayson Tatum and Jaylen Brown added 21 points apiece, while Marcus Smart finished with 14 points on top of four rebounds and four assists. The Celtics shot the ball well with a 50 percent clip from the field, but they simply couldn't stop Miami's momentum in the second half after the huge third-quarter blitz from the Heat.

"We pulled apart and we didn't play well," Celtics head coach Brad Stevensadmitted after the game. "And they did a good job. We're not beating this team if we're not completely connected on both ends of the court. So, got to get back to being that, which we've been at times. But right now, they're a better team. We're going to have to fight to get back in this series."

Boston will look to avoid getting into a 3-0 hole when they collide with the Heat in Game 3 on Saturday. No team has ever won a best-of-seven playoff series after trailing 3-0. Boston will likely get a boost on Saturday, as veteran forward Gordon Hayward might make his return from an ankle injury.

Following their loss to the Heat in Game 3, tempers reportedly flared inside the Celtics locker room. Malika Andrews of ESPN reported that Marcus Smart was heard yelling at his teammates during a heated argument before leaving the locker room. Andrews also reported that several other players were yelling and there were sounds inside the room, suggesting that several things were thrown inside.

Smart did not talk to the reporters about the alleged incident, but reports indicated that there were indeed verbal altercations inside the locker room, which did not reach physical confrontation. Celtics forward Jaylen Brown addressed the media, where he tried to downplay the situation, saying that they just really wanted to win badly and ups and downs are normal in a family.

"I think everything is understood," Brown said. "We’re going to have a meeting tomorrow regardless just to watch the film and go over the game plan with coach, but at the end of the day, emotions are going to fly. We wanted to win this game and we didn’t, but this series is far from over and we’ve got to get ready for Game 3. That’s how it goes. In families there’s ups and downs, there’s fights and emotions, but that’s   exactly what we are: A family."

Brown also added that there is a "beauty to it" because it showed that his teammates and him are very passionate and emotional because they all wanted to win. He pointed out that the situation is no big deal like what the media is trying to portray. He is just hoping that the same passion and intensity will be visible on the floor when they take on the Heat again on Saturday.

"A lot of people are passionate and emotional, and I’m one of those people," Brown  added. "I recognize it as that. I recognize it as emotion and passion and I don’t recognize it as nothing else the media might see it or whatever. That’s all it is. It’s passion that’s being expressed. We’ve got to express that same passion for 48 minutes. Period."

Celtics head coach Brad Stevens also sounded not too alarmed, but he confirmed that his players were emotional after the hard loss that they took in Game 2. But to clear things up, Stevens reportedly had a late-night dinner with Celtics leaders -- Tatum, Walker, Brown and Smart -- on Thursday, according to Adrian Wojnarowski of ESPN. Stevens reportedly let the players speak to settle their difference and give their take on upcoming game.

"In the locker room and meeting, sources said, Smart's focus had been on heightening the urgency of a Celtics team that had blown a 20-point lead in the second half -- and turned the ball over 20 times for the game," Wojnarowski said. "Part of the discussion  in the late-night meeting had been about making sure the Celtics integrated forward Gordon Hayward as smoothly as possible back into the lineup.

Meanwhile, Milwaukee Bucks forward Giannis Antetokounmpo was named as the 2020 NBA Most Valuable Player. Antetokounmpo edged LeBron James in the balloting to win the coveted award for the second consecutive season. The Bucks superstar also won the 2020 NBA Defensive Player of the Year award, making him only the third player in history to win both awards in a season -- next to Michael Jordan and Hakeem Olajuwon.

Antetokounmpo averaged 29.5 points to go along with 13.6 rebounds and 5.6 assists during the regular season. He received 85 of the 101 possible first-place votes to earn 962 points in the balloting. James finished second with 753 points after getting the other 16 first-place votes. James Harden of the Houston Rockets, Luka Doncic of the Dallas Mavericks, and Kawhi Leonard of the Los Angeles Clippers completed the top five, respectively.

During a virtual press conference, Antetokounmpo said that he is happy for winning the award but he prefers not to be called an MVP until he wins it again next year. He pointed out that he is looking forward to making himself a better player in the offseason and find ways to put the Bucks in a better position to win the title after having a second-round exit this season despite finishing with the best record in the league.

The two-time NBA Most Valuable Player is expected to become a subject of rumors in the offseason, as he is set to become a free agent after the 2020-21 NBA season. However, the Greek superstar reiterated that as long as the organization will fight for one common goal, which is winning a championship, he sees no reason not to spend the next 15 years of his career in Milwaukee.