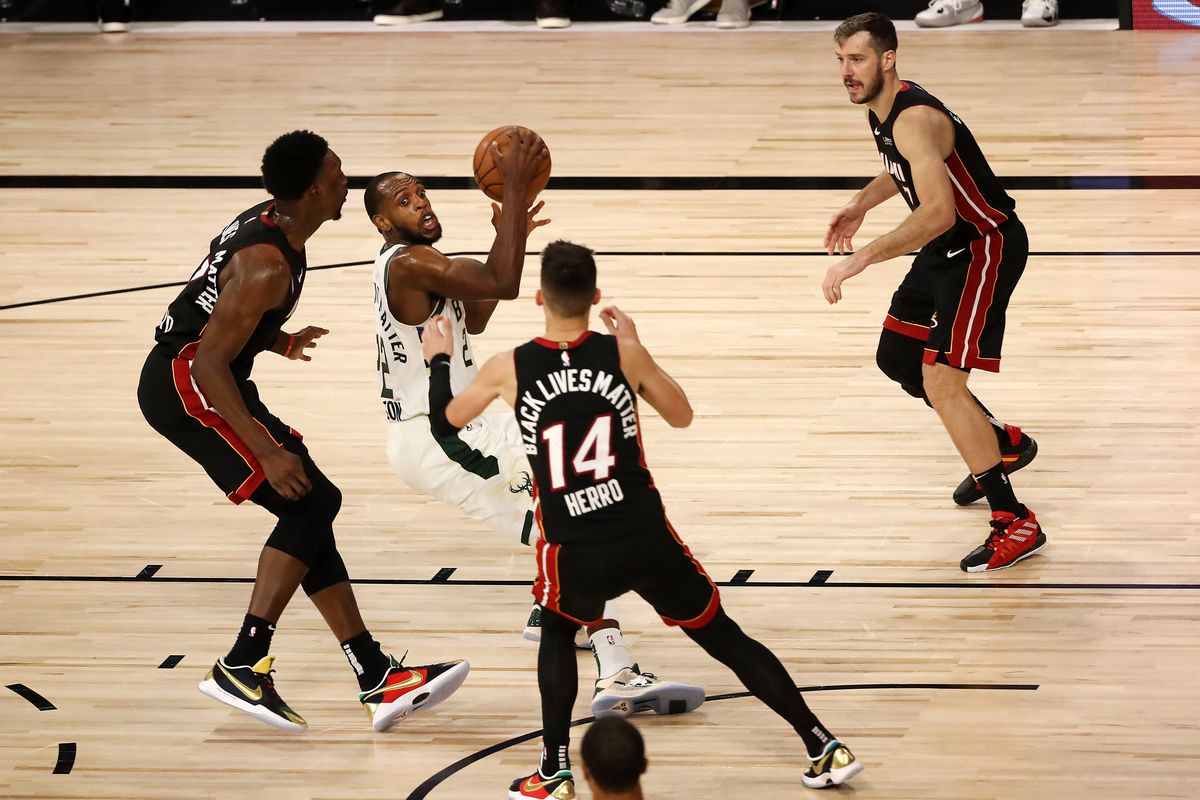 The Miami Heat continue to impress inside the NBA bubble, as they moved a win away from advancing to the Eastern Conference Finals. The Heat leaned on a huge fourth quarter to take a 115-100 win over the top-seeded Milwaukee Bucks in Game 3 of the Eastern Conference semifinals, taking a commanding 3-0 lead in the series.

The Bucks, who had disappointing performances in the first two games of the series, looked on their way to finally taking a win after building a 12-point lead heading into the fourth period. However, the Heat had other things in mind, as they unleashed a huge rally in the final period, outscoring the Bucks, 40-13, in the final 12 minutes of Game 3 to escape with the come-from-behind victory.

Jimmy Butler starred for the Heat anew, as he finished with 30 points to go along with seven rebounds and six assists. The superstar guard scored 17 of his 30 points in the fourth quarter, where they dominated the Bucks. Milwaukee was the heavy favorite heading into the series, but Butler said that he is not at all surprise with the way they dismantled the Bucks in the first three games of the series.

"I’m not surprised," Butler said of their stunning performance against Milwaukee in the series. "I think everybody else in the world might be. But not us here. Not if you wear a Heat jersey, if you’re one of these coaches, if you’re part of this organization — you’ve been seeing what we’ve been doing all year long. That doesn’t surprise us."

Bam Adebayo also had another solid performance for the Heat, as he finished with a double-double with 20 points and 16 rebounds to go along with three assists and two blocks. The 23-year-old center said that they are playing with a chip on their shoulders, knowing that they were almost counted out by experts heading into the series.

"Nobody believed in us," Adebayo said. "Everybody thought we were gonna be in the bottom of the East or a 7th or 8th seed, and nobody thought we would make it this far. Everybody in our locker room believes in each other, believes in one another and believes in all the preparation we’ve had up to this point."

On the other hand, Giannis Antetokounmpo led the Bucks with 21 points and 16 rebounds on top of nine assists and two blocks. However, his effort is not enough to put Milwaukee in a better position in the series. The reigning NBA Most Valuable Player admitted that the Heat are simply playing better and harder than them since the opener.

Brook Lopez had 22 points and six rebounds, while Khris Middleton added 18 points and seven assists. George Hill finished with 13 points and two assists, while Donte DiVincenzo ended up with 10 points and two rebounds. The Bucks shot 42.0 percent from the field, including a measly 11-for-37 clip from beyond the arc. Milwaukee went 6-for-23 from the field, and 0-for-10 from downtown in the final 12 minutes of the match.

"They made every play," Bucks head coach Mike Budenholzer of their fourth-quarter collapse via ESPN. "And we didn't make enough, obviously."

The Heat will look to close out the series in Game 4 on Sunday. If they win, Miami will move on to the Eastern Conference Finals since the Big Three era of LeBron James, Dwyane Wade, and Chris Bosh. The Bucks are facing a tough situation, as no team has ever recovered from a 3-0 deficit in NBA history.

The Houston Rockets will have to deal with size disadvantage every night against almost any team in the league, but it does not mean that they will be pushed around, which they showed in Game 1 of their series against the Los Angeles Lakers. The Rockets cruised to a 112-97 win over the top-seeded Lakers on Friday.

James Harden bounced back from a poor performance last Wednesday, as he torched the Lakers with 36 points on 12-for-20 shooting, including a 3-for-6 shooting from the field. Harden said that they might look small on paper, but they are clearly not intimidated by bigger teams in the league.

Russell Westbrook, who missed the earlier part of the postseason due to a quad injury, was on his deadly form on Friday, finishing with 24 points to go along with nine rebounds and six assists. Eric Gordon also did a lot of damage with 23 points, while Austin Rivers added 10 points off the bench for the Rockets.

Houston was in control for the majority of the match, dodging several comeback attempts from the Lakers. Houston had a six-point lead heading into the final period, and sustained their momentum with a 16-3 run to start the fourth quarter to take control of the match. The Rockets never looked back en route to the upset win in Game 1.

Houston looked sharp and showed no signs of fatigue despite getting just one day of rest after they defeated the Oklahoma City Thunder in Game 7 of their first-round series. On the other hand, the Lakers looked rusty, as they shot just 11-for-38 from beyond the arc. Lakers head coach Frank Vogel felt that the Rockets had the advantage because of their momentum but he is not offering any excuses.

"The Game 7 versus a team with rest -- I've always felt that the team that played a Game 7 has a slight advantage," Vogel said via ESPN. "But you can't look at that as any type of excuse. We're not an excuse team. We've got to come out and compete to win a game. This one's behind us. We lost it. Got to move on to Game 2."

Anthony Davis led the Lakers with 25 points and 14 rebounds to go along with three steals and three blocks. However, much was expected from the superstar big man, as he went up against defenders PJ Tucker and Robert Covington, who are both much smaller than him.

LeBron James finished with 20 points on top of eight rebounds and seven assists. The four-time NBA Most Valuable Player went scoreless in the fourth quarter, though, failing to stop the huge rally from the Rockets. James said that they were not ready for the speed the Rockets showed, but they should be more prepared after getting a taste of it in the blowout loss in the series-opener.

"I think it’s the speed," James said via Los Angeles Times. "They play with a lot of speed, obviously, starting with the head of the snake in Russ and they play with a lot of speed both offensively and defensively. And you can watch it on film and you can see it on film, until you get out there and get a feel for it. That’s what we did tonight.  We got a feel for their speed and we should be fully aware of that going into Game 2."

Davis, on the other hand, thinks that they should do a better job of rotating the ball to counter Houston's speed, while also minimizing their turnovers. The Lakers had 17 turnovers in Game 1, which led to 27 points off turnovers for the Rockets, who Davis thinks became a better team defensively since the NBA restart.

"They’re a good defensive team, especially since they’ve been here in the bubble," Davis said of the Rockets. "All their guys are like-sized and they’re able to switch everything, kind of how Golden State does. Switch everything and then just cover each other. So our passing has to be a lot better than it was tonight, but we make the right plays and we can make them pay."

The Lakers will look to bounce back on Sunday. Los Angeles also lost to Portland in Game 1 of their first-round series but made huge adjustments to sweep the next four games to move on the Western Conference semis.