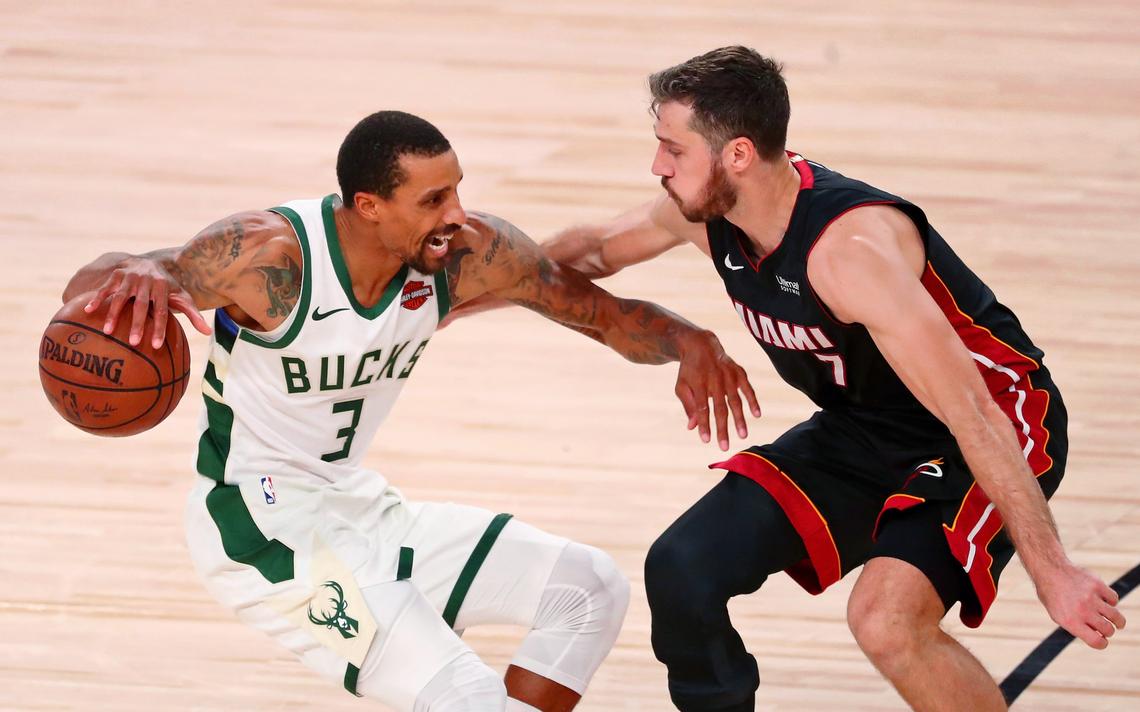 The Miami Heat are back in the Eastern Conference Finals for the first time in the post-Big Three era in South Beach. The Heat completed their upset of the top-seeded Milwaukee Bucks with a 103-94 win in Game 5 of their second-round playoff series inside the NBA bubble in Orlando, Florida to move on to the East Finals.

Jimmy Butler led Miami's balance attack as he tallied a double-double with 17 points and 10 rebounds to go along with six assists. Goran Dragic also added 17 points to go along with four rebounds and two assists, while Jae Crowder added 16 points and six rebounds. Tyler Herro also had a huge night for the Heat, finishing with 14 points on top of eight rebounds and six assists for the Heat.

"I just came in with a killer mindset," Herro, who shot 5-for-10 from the field and 3-  for-7 from beyond the arc said after the game via ESPN. "I wanted to leave everything on the floor for my coaches and my teammates. It's one game. We needed it to move on to the next round. Tried to bring everything, and laid it all out on the floor tonight."

Playing without Giannis Antetokounmpo, the Bucks had a strong start, as they took advantage of Miami's sloppiness in offense to take a 28-19 lead to end the first quarter. However, the Heat found their rhythm in the second period, and had a 30-9 run to take a 52-46 lead at the half. The Bucks managed to stay within striking distance in the second half, but the Heat and their defensive effort were simply too much for the Giannis-less Bucks.

Despite the win, the Heat had a rough night on the offensive end of the floor, as they committed 21 turnovers. Good thing for the Heat, their defense was on point in Game 5, showing that they are determined to close out the series. Heat head coach Erik Spoelstra lauded his team's performance against the Bucks.

"We were flying around. It was like we were going 1,000 miles per hour," Spoelstra said via Miami Herald. "You could see it on the defensive end. But offensively, you could just see a little bit of anxiousness. It’s from a good place. Our guys really want this. Guys really want to play well for each other and our guys knew what was at stake tonight. They really wanted to get this win."

With the win, the Heat advanced to the Eastern Conference Finals for the first time since 2014 and became the lowest-seeded team to advance the East Finals since the eight-seeded New York Knicks in 1999, per ESPN. However, Butler said that he is not contented of just making the conference finals, saying that his ultimate goal when he moved to the Heat last year was to win a title for the franchise.

"It means a lot, but like you said, that's not my goal," Butler via ESPN. "That's not my guys' goal. It's not the organization's goal. We want to win it, win a  championship, and I think that's what we're focused on. These next eight are going to be much harder than the previous eight. We know that, but we're ready."

The Heat will face either the Boston Celtics or the Toronto Raptors. And as for the Bucks, there will be a lot of questions about their future, including Antetokounmpo's impending free agency in 2021. There were speculations that Antetokounmpo will ask for a trade if the Bucks fail to make at least the NBA Finals this season, but the reigning NBA Most Valuable Player hinted that he is not thinking of leaving Milwaukee.

"Some see a wall and go in [another direction]. I plow through it. We just have to get better as a team, individually and get right back at it next season," Antetokounmpo told Chris Haynes of Yahoo Sports when asked about the possibility of him requesting for a trade. "If winning a championship was easy, everyone would have one. We lost.             Everyone saw that we lost. It’s disappointing, but what are we going to do? We’re going to keep working."

Meanwhile, the Los Angeles Clippers are now a win away from reaching one of their expected destinations -- the Western Conference Finals. The Clippers, who have been tagged a serious title contender this season after a major roster shakeup last year, held off the Denver Nuggets to take a 96-85 win in Game 5 of their second-round showdown in Orlando, Florida.

Kawhi Leonard had another remarkable performance for the Clippers, finishing with 30 points and 11 rebounds to go along with nine assists, four steals, and two blocks. Montrezl Harrell provided a huge lift off the bench with 15 points, Lou Williams added 12, while Marcus Morris and Ivica Zubac added 11 points apiece. Paul George scored just 10 points on 4-for-10 shooting, but Clippers head coach Doc Rivers had nothing but praises for the superstar's defense.

"I think it gets lost sometimes with PG because he is such a great shooter," Rivers said via Los Angeles Times. "It just seems like the better the shooter you are, the more people forget about how good you are defensively. For whatever reason, I think that’s true. But he has been sensational. You can always tell where he’s at like health wise and mentally by the way he’s playing defense."

The Clippers jumped on the gun right from the opening tip and dominated the Nuggets in the second period, taking a 26-12 lead. However, Denver showed resiliency and managed to tie the game at 48 early in the third period. The Clippers had a quick answer, though, as they went on a 21-5 run to gain control of the match again. Denver had a last-ditch effort to make a comeback in the fourth period, but the Clippers managed to hold on to the win.

The Clippers were not in their usual rhythm in offense, as they shot just 41.8 percent from the field, including an unimpressive 8-for-28 clip from beyond the arc. However, coach Rivers credited his team's defense, saying that when they are sharp defensively, they are hard to beat. George agreed to his coach's assessment, saying that their defense is the fuel that runs their team.

"I keep saying, the game, there’s always going to be run," George said after the game. "In the third quarter, I thought we brought the defense back. Even when they made their runs, the fourth quarter I thought we rallied again and got stops when we needed to put the game away. So I think we’re fine in figuring out, you know, once our defense is there, that creates everything for this team."

Nikola Jokic was solid for the Nuggets, tallying a double-double with 26 points and 11 rebounds to go along with six assists, while Jamal Murray posted 18 points on 6-for-15 on top of seven assists and four rebounds. Michael Porter came off the bench to score 15 points on 5-for-8 shooting and six rebounds. In a statement that drew mixed reactions, Porter told reporters that he feels they are relying too much on Murray and Jokic.

"I just didn't touch the ball," Porter said when asked why he failed to maintain his momentum after scoring 15 in the opening half. "They didn't do anything differently. That is up to the play calling, the coaches and whose hands they want to put the ball in. We kept going to [Jokic] and [Murray] and they are two amazing players, but I just think to beat them we need to get more players involved. We have to move the ball  a little bit better."

The Nuggets struggled offensively, shooting just 39.7 percent from the field, including a 33.3 percent clip from downtown. Denver will look to extend the series in Game 5 on Thursday. They are in a familiar territory, as they also went down 3-1 in their first-round series before sweeping the last three games. Nuggets head coach Mike Malone knows that the Clippers is a different team, but he is not close to waiving the white flag.

"The same message will be what it was against Utah," Malone said. " It wasn't that we have to come back and win three games. It was, let's win Game 5. And then after that, let's win one at a time. Let's win 6 and then win 7. We have done it. It is a different opponent. Very talented, deep team, but I think we do have confidence in being a resilient group and being a team that when everyone else has written us off, we have found a way."