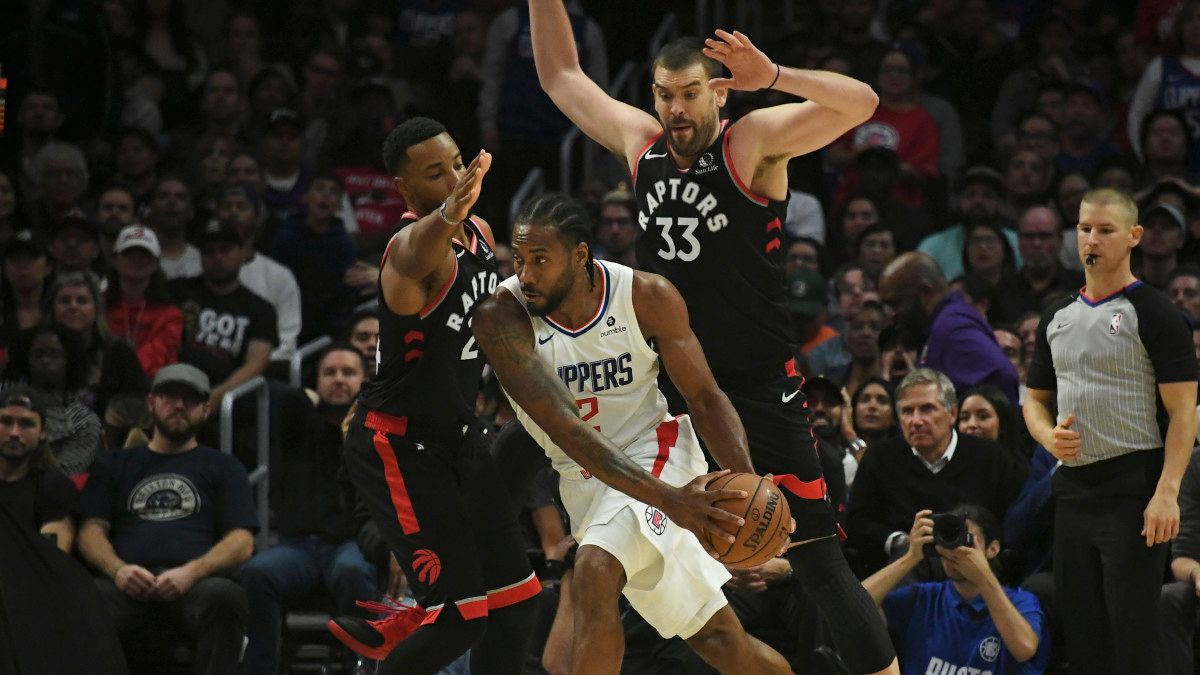 Their man man may have been misfiring all game long, but the Los Angeles Clippers still managed to rally past the Toronto Raptors for a 98-88 win. Scoring combo guard Lou Williams led his team with 21 points off the bench, while Montrezl Harrell chipped in a double-double performance of 14 points, 11 rebounds, 2 steals and 3 blocks. Kawhi Leonard, who faced the Raptors for the first time since winning the championship with them last season, struggled mightily. He only made two of his 11 shots, and turned the ball over nine times. Yet, Leonard finished with a near triple-double stat line of 12 points, 11 boards, 9 assists and 3 steals.

Despite his shooting inefficiency, Leonard reiterated that he was a better teammate in the win, per Ohm Youngmisuk of the ESPN.

"They [made] me better tonight. As soon as I walked across half court, they were  trying to get the ball out of my hands, sending an extra defender. It's going to [make] my teammates better. [Opponents are] going to do it at times in the playoffs and regular season, and they are going to knock down the open shot. That's what wins games: open shots.

Indeed, the Raptors almost always sent two men to guard Leonard, forcing the latter to often give up the ball. Leonard only had 11 attempts in the game, a far cry from his 21.1 average per game. The Clips also showed great character in the comeback victory. They were held to only 15 points in the first quarter, and even trailed by five entering the payoff period. But their defense was on-point in regulation, limiting the Raptors to only 10 total points in the fourth.

Young budding star forward Pascal Siakam led the charge for the Raptors with 16 points, 10 rebounds and 6 assists. Norman Powell had 15 markers, while Fred VanVleet logged in 14 points, 8 assists and 3 steals. It was a disappointing loss for the depleted Raptors, who seemingly had the game in control before they were locked down by the Clippers. The defending champs played without the services of usual starters Kyle Lowry and Serge Ibaka.

The Raptors will try to bounce back from this painful loss when they visit Portland to face Damian Lillard and the Trail Blazers. Meanwhile, the Clippers face a back-to-back schedule against the Houston Rockets and then the New Orleans Pelicans.

Despite the absence of their injured all-around forward Gordon Hayward, the Boston Celtics were able to turn back the Dallas Mavericks with a convincing 116-106 victory. Kemba Walker again led the Celtics with 29 points and 5 assists, while Jaylen Brown netted a double-double outing of 25 points and 11 rebounds. Jayson Tatum, who has been consistent with his offense this season, only made one of his 18 attempts from the floor. Still, the Celtics got timely help from their role players such as Daniel Theis and Brad Wanamaker, who chipped in 11 and 10 markers, respectively.

But the player who stole the spotlight in the win was the fine play of defensive ace Marcus Smart on both ends of the floor. He took part in the offense with 17 points and 6 assists, while also doing a tremendous job on guarding the 7-foot-3 skilled big man Kristaps Porzingis. Porzingis finished the game with only 4 points, and a measly 1-11 shooting. In defending the bigger Latvian center, the 6-foot-4 Smart said that he just embraced the physicality of the match-up, per Taylor Snow of Celtics.com.

“I was just being physical with him. I just used my strength and my quickness. Obviously, he has a height advantage over me, so I had to get low and really battle. Really for us, it was keeping our hands back; he loves doing the sweep-through move  … It’s kind of hard to guard. So, for us, it was just being as physical as we can, getting our hands up and making him shoot over us.”

Luka Doncic produced yet another brilliant display on offense as he topscored for Dallas with a game-high 34 points, on top of 6 rebounds and 9 assists. Maxi Kleber contributed 15 points and 8 boards, while Jalen Brunson and Dwight Powell had 12 points apiece off the bench. As for Porzingis, there’s no doubt that he is still finding his rhythm after missing the entirety of last season. No matter how skilled and talented a player is, it takes a lot of time for him to get into the groove and acclimatize himself to the speed and physicality of the game.

The Minnesota Timberwolves used a strong first quarter performance to have enough cushion as they defeated the Detroit Pistons, 120-114. Andrew Wiggins continues making his case for a break-out season as he totalled 33 markers in the win, while grabbing 6 rebounds and dishing out 5 assists. Karl Anthony-Towns dominated yet again with 25 points, 8 boards and 2 blocks, while Jake Layman came off the bench to contribute 16 points.

The Wolves, who had four starters producing double-digit scoring, raced off from the get-go to put up 41 points just in the opening quarter. They maintained a 15-point lead after the first half, providing themselves with a cushion in turning back the Pistons’ attempt to come back in regulation.

It was a disappointing result for the returning Blake Griffin. Griffin had 19 points, 7 boards and 6 assists in his first game of the season. Pistons shooting guard Luke Kennard topscored for his team with 25 markers, while Derrick Rose put up 18 points off the bench.

The Pistons now fall to a 4-7 record to start the season. Rose points out that the team has to come together to improve their lowly win-loss card, per Ansar Khan of MassLive.

Detroit will go up against Jimmy Butler and the Miami in the second leg of their back-to-back schedule. They will end the week with a match-up against the Charlotte Hornets before they take a four-day off to rest.