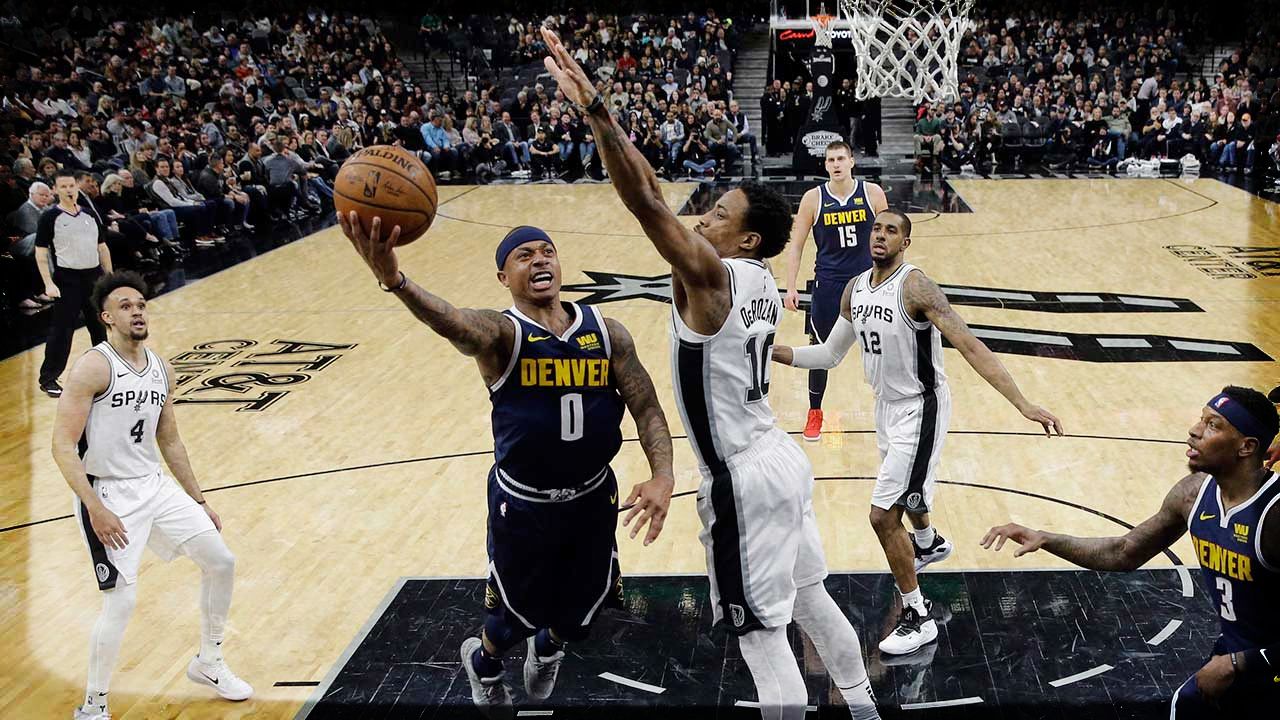 The San Antonio Spurs again solidified their playoff chances, holding off the West’s 2nd-ranked Denver Nuggets, 104-103. DeMar DeRozan led the Spurs as he put up an all-around performance of 24 points, 7 assists, 6 rebounds and 3 steals, while All-Star big man LaMarcus Aldridge came through with his usual efficient outing of 22 points and 9 rebounds. With the Spurs leading 102-88 in the waning minutes of regulation, the Nuggets would mount a comeback attempt off four consecutive three-pointers, with Jamal Murray accounting for three of it. However, the Nuggets failed to cap their rally as Nikola Jokic committed a turnover, followed by a missed Gary Harris corner jumper.

Murray topscored for the visiting Nuggets with 25 points and 8 assists, while Jokic completed a double-double of 22 markers and 10 boards. Denver has suddenly lost three straight games as they lose their grip on the West’s top spot. For the 8th-ranked Spurs, the win puts them three games ahead of the Sacramento Kings and 5.5 games ahead of the Los Angeles Lakers.

Looking to catch a big fish to put a silver lining to an otherwise disappointing season, the bottom-dwelling Phoenix Suns wielded the upset axe to prevail over the league-leading Milwaukee Bucks, 114-105. Kelly Oubre Jr. had one of the best nights of his career, finishing with a double-double of 27 points and 13 boards, on top of 3 rejections and a steal. Devin Booker chipped in 22 points, 7 assists and 5 rebounds, while rookie center Deandre Ayton came through with 19 points, 12 rebounds and 3 blocks. The Bucks seemingly had the game under wraps as they led 96-87 with only six minutes left in the final quarter. But the Suns would forge a run, taking a 100-98 lead off a Booker three-pointer. Bucks shooting guard Malcolm Brogdon tied the game at 103 with a trey of his own, before Suns recently-acquired guard Tyler Johnson scored on a floater down the lane to put Phoenix up by two with under a minute left.

All-Star forward Giannis Antetokounmpo led the charge for the visiting Bucks with 21 points, 13 rebounds, 6 assists and 3 steals, but only had 14 shots in the loss. Milwaukee has now lost two consecutive games after sustaining a close-call defeat at the hands of the Utah Jazz in their previous assignment.

Randle and Holiday combine for 60 to oust Jazz

Julius Randle and Jrue Holiday tallied 30 apiece as the New Orleans Pelicans upset the Utah Jazz, 115-112. Holiday had 30 points and 4 assists for the Pelicans, while Randle scattered 30 markers of his own, on top of 8 rebounds, 5 assists and 2 steals. With the Jazz up by twelve entering the mid-way mark of the fourth quarter, the Pelicans staged a comeback to take a 111-105 lead off a Randle made shot over the outstretched arms of Rudy Gobert. But the Jazz made a comeback of their own, taking a one-point lead thanks to a Donovan Mitchell coast-to-coast lay-up. But that proved to be the Jazz’ last grasp at the lead as the Pelicans would score off an offensive rebound, iced by Randle’s two made free throws.

Jae Crowder and Kyle Korver came off the bench to punch in 20 points apiece, while Gobert finished with another double-double of 19 points and 19 boards. Utah falls to a 36-27 record, still holding the 6th spot in the stacked Western Conference.

With a chance to bolster their playoff position, the Los Angeles Clippers put the clamps on the home team as they defeat the Los Angeles Lakers, 113-105. It was a total balanced offensive attack for the Clippers, with stretch forward Danilo Gallinari leading the way with 23 points and 6 rebounds. Veteran point guard Patrick Beverley only had 13 points in the game, but proved to be the game-changer with a versatile stat line of 9 rebounds, 4 assists and 5 steals. The Clippers were able to answer every Lakers’ attempt to chip away at the lead, as they executed well on offense evidenced by a stellar 49% overall clip from the field.

Rajon Rondo completed a triple-double of 24 points, 12 assists and 10 rebounds, while LeBron James contributed 27 points, 8 rebounds and 6 assists. The loss puts the Lakers at an all-time low this season, falling to 5.5 games below the last playoff spot in the West. Brandon Ingram missed out on this contest with a shoulder injury, while Kyle Kuzma injured his ankle during the game and is now ruled out for Wednesday’s game against the Nuggets.