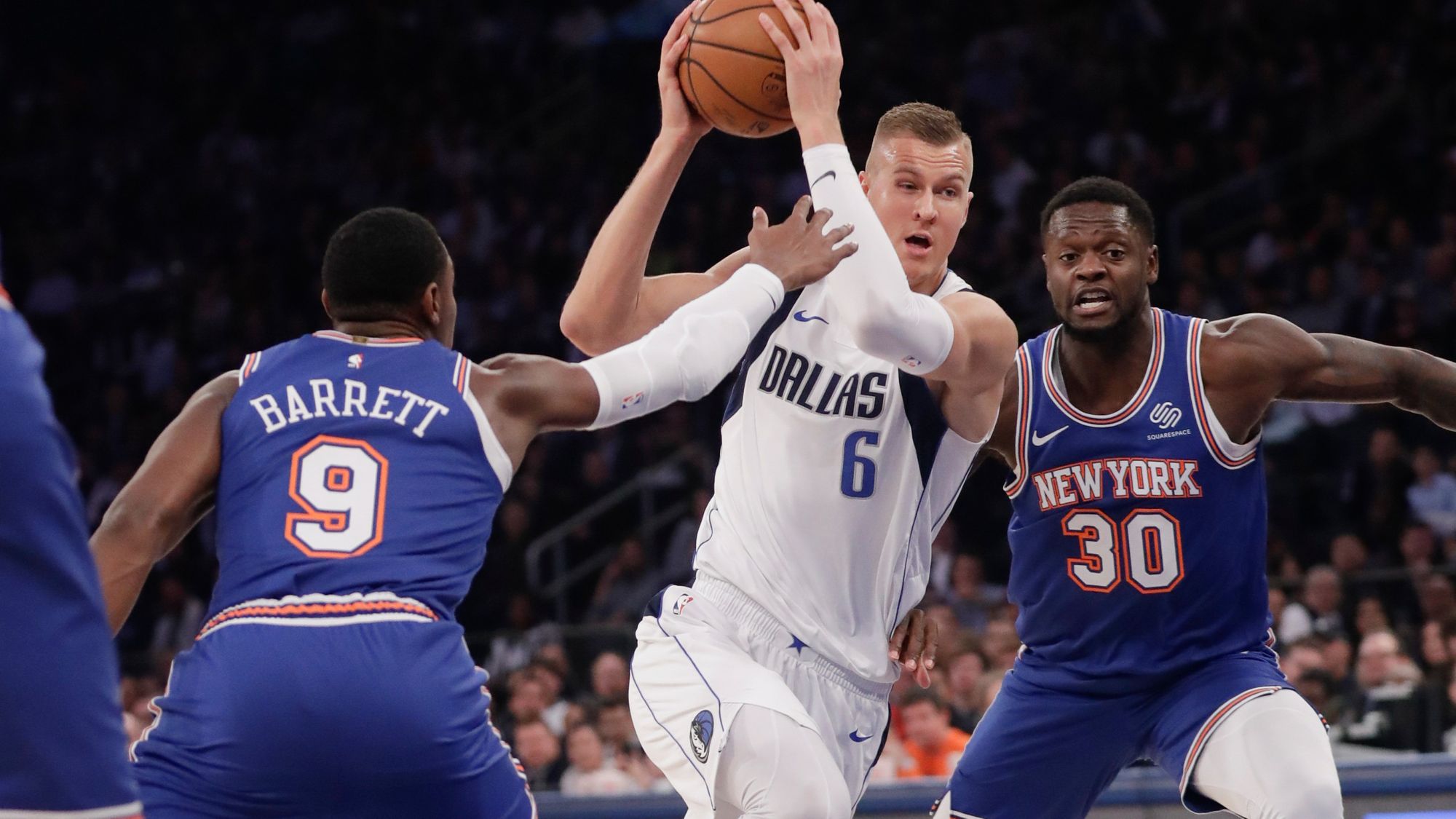 NBA Daily Rundown: Porzingis Gets Hostile Welcome And A Loss In Return To Madison Square Garden

The New York Knicks earn their third win of the season as they carved a close-call 106-103 victory over Kristaps Porzingis and the Dallas Mavericks. Marcus Morris led the Knicks in scoring as he put up 20 markers, while Julius Randle pulled off a double-double performance of 17 points and 10 rebounds. New York also got a timely boost from their second unit, led by defensive big man Mitchell Robinson’s 16 points and 8 boards. Dennis Smith Jr played his best game of the early season as he finished with an all-around stat line of 13 points, 6 rebounds and 8 assists. Bobby Portis also had 10 markers off the bench.

The much-needed win stopped the Knicks’ two-game losing skid. They held the Mavericks to just eight three-pointers and a lowly 22% clip from beyond the arc. The Knicks had a five-point lead after the first half, but the Mavs came storming right out the gates as they tied the game entering the payoff period. However, New York put up a masterful defensive stand in the fourth quarter, limiting Dallas to just 16 total points in the period.

Sophomore playmaking maestro Luka Doncic again had a triple-double in the loss. The young Slovenian had 33 points, 10 rebounds, 11 assists and 3 steals. Porzingis also chipped in a double-double outing of 20 points, 11 boards and 3 blocks, but it was not enough as the Mavericks suffered their fifth loss in eleven games this season. Tim Hardaway Jr came off the bench to contribute 12 points, while hulking center Boban Marjanovic netted 10 points and 5 rebounds.

Before the game, Porzingis already knew that a rowdy welcome is in store for him. True enough, Knicks fans booed him at every opportunity. The 7-foot-3 Latvian star said before the contest that the Knicks fans and the whole city always crave for success in their basketball team, per SNY’s Ian Begley.

"When I was there the expectations were always high for us. The city is always hungry for success in basketball. And for them -- for the fans -- and the city to be going through that year after year, it's got to be tough. So it's always a lot of pressure. And when things aren't going right, usually there needs to be changes. This year is no different for them again. It's tough. It is what it is."

Porzingis and the Mavericks will look to improve on their 6-5 record as go back home to host Pascal Siakam and the Toronto Raptors. Meanwhile, the Knicks will try to get a winning streak going when they face the Charlotte Hornets on Saturday.

It was again an episode of the Nunn show as the Miami Heat turned back the Cleveland Cavaliers, 108-97. Rookie combo guard Kendrick Nunn led the charge for the Heat as he amassed a do-it-all stat line of 23 points, 5 rebounds, 8 assists and 2 steals. Third-year center Bam Adebayo also did a bit of everything, coming up with a massive double-double night of 16 points, 15 rebounds and 5 assists. Tyler Herro, another Heat prized rookie, poured in 16 markers off the bench.

The win also meant that this is the Heat’s best start to a season in six years or since the Big 3 era of LeBron James, Dwyane Wade and Chris Bosh. They may not have a bevy of superstars like they did back in those days, but the ball was moving great in offense resulting to their high shooting efficiency. The Heat shot a stellar 54% clip from the field as a team, including a solid 40% from three-point territory. They also piled up 31 assists in the win, something that head coach Erik Spoelstra commended, per Ira Winderman of the South Florida Sun Sentinel.

"How intentional they have been about how their taking responsibility with decisions with the ball, it's obviously a major thing that we're trying to get a hold off. And they're still able to be themselves, but there has to be a great sense of responsibility when you're making decisions for the team.

I love the way the guys are sharing."

Indeed, Miami saw all of their starters put up double-digit points. Jimmy Butler, arguably the lone superstar of this team, only had 14 points but dished out 6 assists.

Kevin Love topscored for the Cavaliers with 21 points, 10 boards and 4 steals. Collin Sexton had 15, while Larry Nance Jr produced 14 points and 8 boards off the bench. It was a disappointing performance for the Cavs, who already trailed by 24 points at halftime. Cleveland will have a two-day rest before they host Joel Embiid and the Philadelphia 76ers on Sunday.

George shows no rust but Clippers fall to Pelicans

Jrue Holiday and the New Orleans Pelicans spoiled the season debut of superstar forward Paul George as they beat the Los Angeles Clippers, 132-127. Holiday turned in his best game of the young season, amassing 36 points, 4 rebounds, and 7 assists while being active on the defensive end with 6 steals. Veteran big man Derrick Favors put up a monster double-double performance of 20 points and 20 boards. Young point guard Frank Jackson chipped in 23 markers off the bench, while JJ Redick contributed 19 points.

The Pelicans, who improved their win-loss card to 3-8, had to dig in deep in their bag as injuries to their key players are mounting up. Their main scorer in Brandon Ingram didn’t play, as well as Lonzo Ball and Josh Hart. They also played without back-up center Jahlil Okafor, while the injured top rookie Zion Williamson remains on the inactive list.

Clippers star Paul George, who played his first game of the season following his shoulder surgery in the offseason, led his new team with 33 points, 9 rebounds and 4 assists. Lou Williams started in the game and had 31 markers. Back-up guard and defensive specialist Rodney McGruder produced 20 points off the bench, while Montrezl Harrell chipped in 18. The Clippers played without the services of superstar Kawhi Leonard. Key cogs Patrick Beverley and Landry Shamet also missed the game. Beverley is recovering from a minor calf injury, while Shamet sustained an ankle injury in their previous game against the Toronto Raptors.