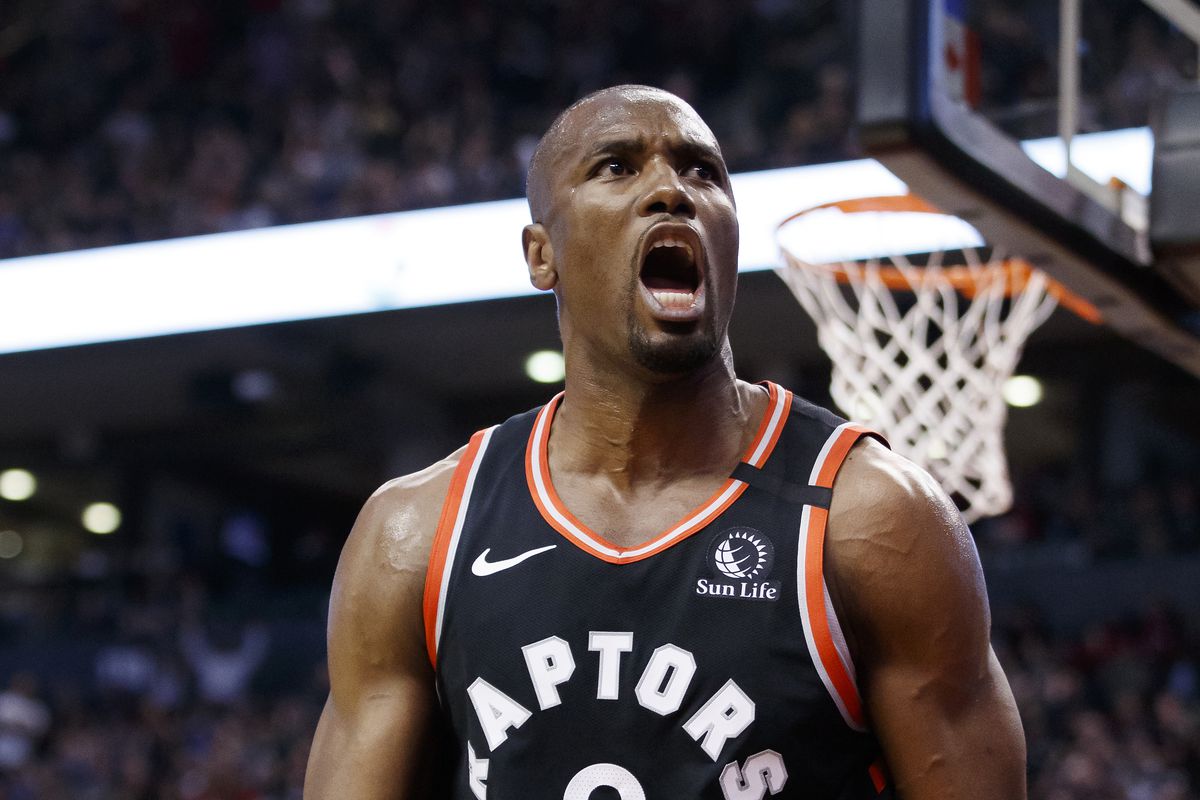 The Toronto Raptors displayed their championship composure as they fought back to hack out a thrilling 119-118 victory over the visiting Indiana Pacers. Veteran All-Star point guard Kyle Lowry showed why he indeed deserved his All-Star berth this season as stuffed the stat sheet with 32 points, 8 rebounds, 10 assists and 2 steals. Serge Ibaka poured in 30 markers, including an all-important right wing three-pointer that proved to be the night’s game-winner. First-time All-Star forward Pascal Siakam also tallied all-around numbers of 25 points, 9 boards, 5 assists and 3 steals.

After building an early ten-point lead at the end of the opening frame, the Raptors lost control of the game in the second quarter. The Pacers waxed hot as they exploded for 43 points in that quarter, while limiting the Raptors to just 18 total markers. As the game hit its mid-way mark, Indiana completely erased the Raps’ lead and were already leading by 15 points.

However, the defending champs won’t go down without a fight. Toronto stormed back in the second half as they trimmed the 15-point deficit to only four after the third quarter. The final period would be a see-saw affair, but it was Ibaka’s right wing trifecta that sealed the Raptors’ 12th win in a row, the franchise’s all-time high. Raptors head coach Nick Nurse praised his wards for not giving up despite going down big in the second quarter, as per Lori Ewing of The Canadian Press.

“We’ve said this before during this win streak, we haven’t played great all the time but we keep finding a way and that’s a heck of a characteristic to have. Tonight we weren’t very good and they were very good. They were awesome, they were cutting and flying and moving and hustling and guarding and physical and all the things you can be and they were trying to knock us out – and we wouldn’t quite go away and  luckily we hung in there and pulled one off.”

The Pacers drew another all-around game from Malcolm Brogdon, who finished with 24 points, 6 rebounds and 6 assists. All-Star big man Domantas Sabonis chipped in a triple-double night of 15 points, 11 boards and 10 assists, while veteran gunner Justin Holiday fired six treys on his way to 22 markers off the bench. Star shooting guard Victor Oladipo had his first start since coming back from his long injury layoff, and scored 13 points.

It was another disappointing outcome for the Pacers, who now have dropped their last three assignments. Brogdon says that their offensive set need more fluidity, especially in breaking the Raptors’ trapping defense, as per J. Michael of Indianapolis Star.

"It was on us. We just weren't organized. We don't have a problem with (pressure). We just struggled with it tonight. It wasn't a special press. We weren't organized in our spots. We didn't get the ball up the court fast enough. We didn't attack. You got to attack it, try to get a bucket or a layup on the other end. We were just trying to get it over half court."

The Pacers will get a chance to get back at the Raptors when they host the defending champs on Friday.

The Denver Nuggets notched their second consecutive victory as they carved a close-call 98-95 win over Rudy Gobert and the Utah Jazz. Despite coming in very short-handed, the Nuggets leaned on their ever-versatile superstar big man. Nikola Jokic amassed another massive triple-double outing, tallying 30 points, 21 rebounds and 10 assists. With this spectacular performance, Jokic became the ninth player in NBA history to put up a 30-20-10 point-rebound-assist stat line. Jamal Murray topscored for the Nuggets with 31 markers, while Monte Morris came up with 15 points and 2 steals.

With recent moves and an injury bug depleting their line-up, the Nuggets only fielded seven players in this game. They fell behind by eight points at halftime, but that didn’t stop the Nuggets from continuing to bring the fight to the home squad. Denver chipped away at the lead slowly until a Jokic improbable one-legged turnaround jumper gave them a 96-95 lead with a little over a minute remaining on the clock.

Denver head coach Michael Malone couldn’t be any prouder of his tough-minded stalwarts, as per Alex Labidou of Nuggets.com.

"I've said this a lot recently, but this is our new best win of the year. Such a great group of guys in there. It speaks to the great belief they have in one another. Next man up mentality....This schedule has been brutal and to come in here and get another division win against a team that is really tough to beat in this building [is incredible]. Jamal [Murray], Monte [Morris], Gary [Harris], Nikola [Jokić], Torrey [Craig], Vlatko [Čančar] and PJ Dozier, I'm so proud of them."

This win also marks the Nuggets’ fourth victory in the last five games. They are now sporting a 36-16 record, good for the third seed in the Western Conference. The Nuggets were involved in a four-team trade deal that saw them let go of quality role players Malik Beasley and Juancho Hernangomez. As key cogs Will Barton, Jerami Grant, Paul Millsap and Mason Plumlee sat out the game due to injuries, the Nuggets only had seven players available for this powerhouse match-up against the Jazz.

Still, Jokic and his six teammates didn’t use that as a valid excuse, as per Ryan Young of Yahoo Sports.

“Nobody would think that we could win it. The whole pressure was on them today. We had seven healthy bodies. Everybody stepped up. Everybody was there. We just didn’t want to quit. We didn’t want an excuse tomorrow … We just went out there and try our best.”

Mike Conley led the Jazz in the scoring column with 21 points, while adding 8 rebounds and 5 assists to his tally. Donovan Mitchell produced 18 points and 8 rebounds, and Rudy Gobert finished with a double-double performance of 16 points and 14 boards. The Jazz will try to bounce back from this tough loss when they face Damian Lillard and the Portland Trail Blazers on Friday.

Memphis goes above .500 in win at Dallas

The young upstart Memphis Grizzlies continued their winning ways as they defeated the Luka Doncic-less Dallas Mavericks, 121-107. Rookie point guard Ja Morant led the way for the Grizzlies with 21 points and 3 assists, while sophomore combo big man Jaren Jackson Jr filled the stat sheet as he tallied 19 points, 6 rebounds, 3 dimes and 2 blocks. Back-up point guard Tyus Jones came off the bench to come up with 19 markers of his own, and first-year power forward Brandon Clarke produced 18 points to help Memphis to this morale-boosting victory.

This was indeed an excellent win for the Grizzlies, who are now past the .500 mark as they improved their record to 26 wins against 25 losses. A dominant third quarter run that saw them put up 41 total points while holding Dallas to just 22 markers.

Kristaps Porzingis put up yet another stellar shooting night as he topscored for the Mavs with 32 points, including five hits from beyond the arc. The 7-foot-3 offensively-gifted big man also added 12 rebounds and went perfect in his seven trips to the free throw line. Jalen Brunson chipped in 20 points and 6 assists, while Tim Hardaway Jr contributed 14 points.

Porzingis, who sustained a bloody nose after being inadvertently hit by an elbow from Grizzlies small forward Josh Jackson, lamented how the team’s energy faded in the second half, as per Dwain Price of mavs.com.

“I mean our energy wasn’t great today and they kind of started the second half a little better than us. I got hit in the nose, walked out, came back and we were down (95-74) pretty big, and that was it.

We were trying to fight our way back in there, but something wasn’t clicking. The ball wasn’t moving as well as we wanted to, and our overall energy wasn’t the best. It’s something that we have to keep in mind when we’re on the road.”

All-Star playmaker and top scorer Luka Doncic sat out the game as he is still recovering from an ankle injury. The Mavericks will travel to Washington on Friday to go up against Bradley Beal and the Wizards.