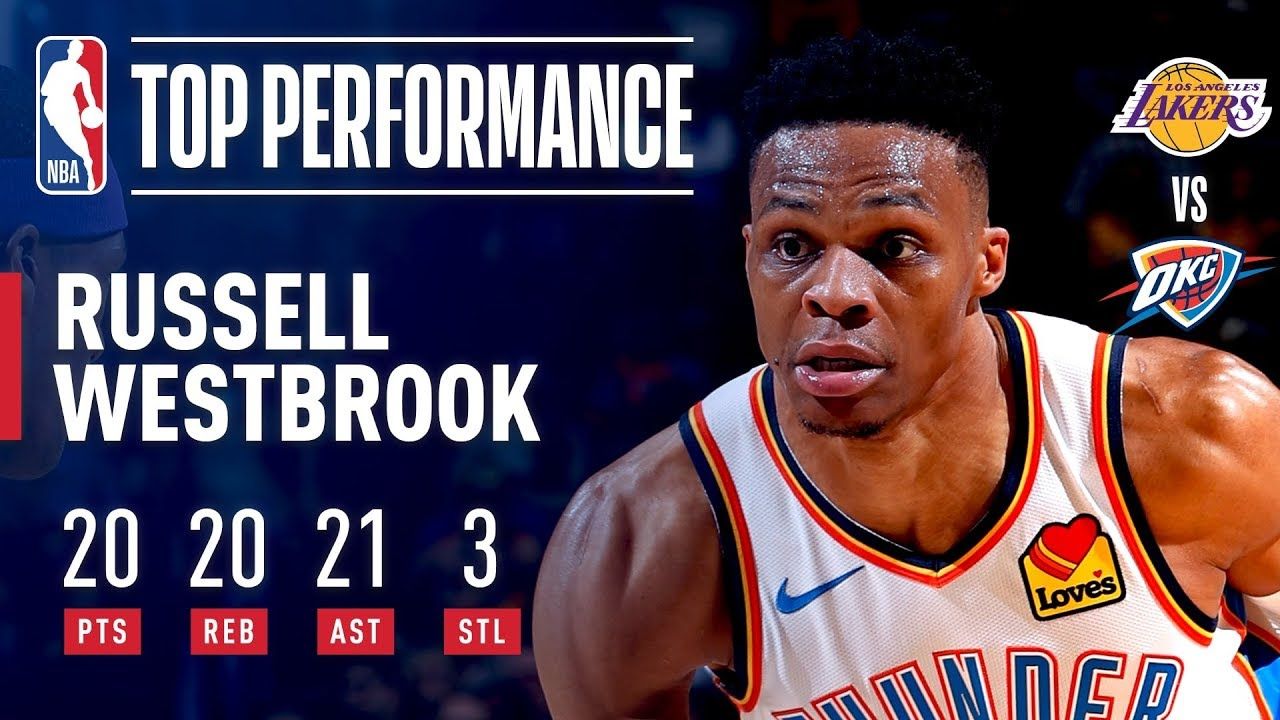 In a heartfelt effort to honor Nipsey Hussle, a rapper and social activist who was killed last Sunday, Russell Westbrook put up a historic performance as the Oklahoma City Thunder beat the Los Angeles Lakers, 119-103. Westbrook logged in 20 points, 21 assists and 20 rebounds in the win, becoming the second player in league history to record such stat line after legendary center Wilt Chamberlain. Jerami Grant topscored for the Thunder with 22 markers, while All-Star forward Paul George contributed on both ends of the floor with 19 points, 6 rebounds, 5 assists and 5 steals. With the game ultimately won for the Thunder in the waning minutes of regulation, Westbrook waved off a substitution for him as he made an obvious attempt to dedicate the game to Hussle, who is affiliated with the Rollin’ 60s Neighborhood Crips. The win also improves the Thunder’s record to 45-33 and puts them in the seventh spot in the Western Conference.

The Lakers, who played without superstar LeBron James, got 23 points and 5 boards from shooting guard Kentavious Caldwell-Pope. Alex Caruso came off the bench to tally 15 points and 7 assists as the Lakers lose their 43rd game of the season.

Despite star shooting guard DeMar DeRozan fouling out in regulation, the San Antonio Spurs relied on their defense as they rallied past the Atlanta Hawks for a 117-111 victory. DeRozan led all scorers with 29 points, on top of 7 rebounds and 7 assists. He fouled out in the waning minutes of the fourth quarter, but the Spurs were able to rely on young budding guard Derrick White to ice the win for the home team. With them trailing by seven at the sixth minute mark of the deciding period, the Spurs then embarked on a 12-2 run, capped off by White’s three consecutive baskets. White’s step-back jumper put the Spurs up by 117-109 with only 36 seconds remaining in the game. White tallied 23 points and 3 assists in the win, while Bryn Forbes chipped in 19 markers.

Hawks veteran small forward Kent Bazemore put on a shooting clinic from beyond the arc, making five triples on his way to a team-high 26 points. Starting center Alex Len contributed 21 markers as the Hawks suffered only their second loss in the last seven games.

The offensive-powered Houston Rockets took off from the get-go as they drubbed the Sacramento Kings, 130-105. James Harden, one of the leading MVP candidates this season, led the charge for the visiting team as he completed a double-double production of 36 points and 10 assists. Shooters Eric Gordon and Danuel House Jr. chipped in 19 markers each as the Rockets maintain their position in the third spot of the conference. The Rockets erected a 16-point lead at the end of the first half, and never looked back from there. They also tied their NBA record of made three-pointers, hitting 26 triples as they swept their season series with the young Kings team.

Buddy Hield led the Kings with 20 points, 7 rebounds and 5 assists, while rookie power forward Marvin Bagley III came off the bench to log in 19 points and 8 boards. The Kings are now sporting a 38-40 record as they bounce out of playoff contention with four games left in their schedule.

The Golden State Warriors again displayed their dangerous playoff form as they carved a convincing 116-102 beating of Nikola Jokic and the 2nd-seeded Denver Nuggets. DeMarcus Cousins outdueled Jokic in their match-up, finishing with an all-around stat line of 28 points, 13 rebounds, 5 assists, 2 steals and 2 blocks. All-Star forward Kevin Durant netted 21 markers, but was thrown out of the game for arguing with the officials in the third quarter. The Splash Brothers had an unusually quiet scoring night, but still combined for 30 points in the victory. The win was a much-needed one for the defending champs as they now hold a 1.5 game lead over the Nuggets for the top seed in the West.

Young combo guard Jamal Murray had 17 points, 4 rebounds and 5 steals for Denver. However, Jokic arguably had the most disappointing game of his season, finishing with only 10 points and 5 rebounds, while committing 6 turnovers.