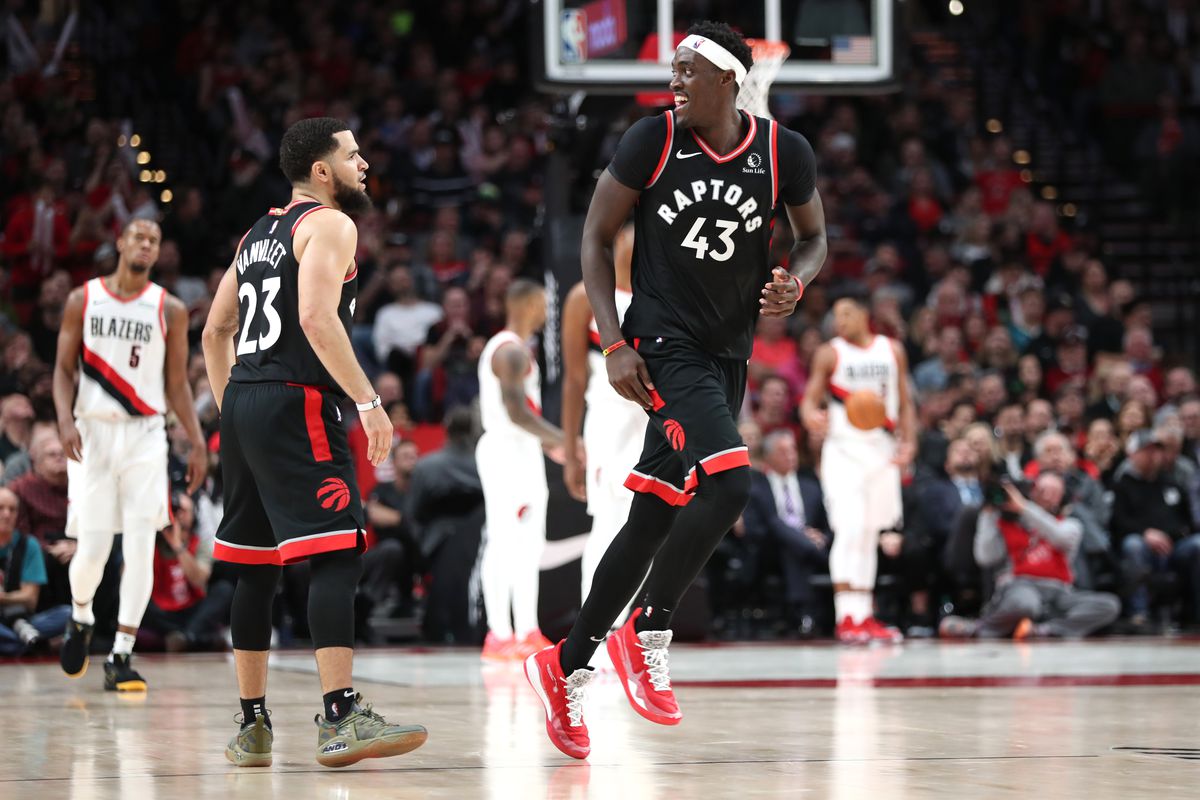 Despite missing the services of three of their key players, the Toronto Raptors still hacked out a morale-boosting 114-106 victory over the Portland Trail Blazers. Young budding forward Pascal Siakam dropped a game-high 36 points, including four makes from three-point territory. Fred VanVleet co-starred in the win as he finished with an all-around stat line of 30 points, 4 rebounds, 7 assists and 2 steals. Newly-acquired combo forward Rondae Hollis-Jefferson pulled off a double-double outing of 16 points and 11 rebounds, while undrafted shooting guard Terence Davis chipped in 15 markers off the bench.

The defending champs played without Kyle Lowry, Serge Ibaka and OG Anunoby. In spite of coming in short-handed, the Raptors were able to execute well on offense and did a masterful performance on the defensive end. They held Blazers superstar Damian Lillard to just nine points, a really far cry from his 30.5 points per game average this season. VanVleet says that the team has been putting more emphasis on their defensive schemes, per Erik Garcia Gundersen of The Associated Press.

“It’s the defence. Offence comes and goes but defence has been pretty consistent for us. The good thing about our game is that most superstars are pretty unselfish so if you throw 2 or 3 guys at them they’re passing. We want to make them pass and make somebody else make shots.”

As for the Blazers, this is another worrisome loss. They are now off to a disappointing 4-8 record to start the year. Rodney Hood led them in scoring with 25, while CJ McCollum totalled 19 points and 6 boards. Anfernee Simons came off the bench to contribute 17 markers, and Hassan Whiteside amassed 12 points and 9 rebounds. But Lillard’s off-night on offense was a difficult hurdle to overcome. Lillard had 10 assists in the loss, but he didn’t see much daylight as the Raptors’ defense focused on him. The 6-foot-3 star says that it’s not the first time that a team has used a box-and-one defense against him, as per the NBA.com.

"The fourth team in a row to come out denying me full court, box and one (defense). Don't remember seeing that many box and ones in the NBA. They make me play against a crowd, even when I'm trying to get downhill and be aggressive, it's literally four people in the paint and the right play is to kick it ahead or kick it out. That was the only option they gave me a lot of times. That was just what it was."

The Blazers will have a two-day rest before they travel to San Antonio to face DeMar DeRozan and the Spurs. They have also shook the basketball world by signing veteran All-Star Carmelo Anthony in an obvious bid to boost their scoring and take some offensive workload off Lillard’s shoulders.

Harden explodes for 47 in win over Clippers

In one of the most awaited match-ups of the season, James Harden outdueled Kawhi Leonard as the Houston Rockets beat the Los Angeles Clippers, 102-93. Harden was again in his fiery form as he finished with a massive total of 47 points, on top of 6 rebounds, 7 assists and 3 steals. Clint Capela produced a double-double night of 12 points, 20 boards and 2 blocks, while Russell Westbrook chipped in 17 markers in the win.

The Beard was in his bag all game long, hitting seven three-pointers and shooting efficiently from the free throw line as he always does. Rockets head coach Mike D’Antoni was the least surprised of his superstar’s incredible performance, as per an article from Yahoo Sports.

"It's not like we haven't seen it before, and we'll see it again. He's amazing. He's just a master of the game. It's what I expect. He's a special player, no doubt about it."

Kawhi Leonard led the charge for the Clippers as he logged in a do-it-all performance of 26 points, 12 rebounds and 7 assists. Lou Williams reinforced Leonard with 20 points off the bench, while stretch big man JaMychal Green also provided a spark in the second unit as he totalled 14 points and 14 boards.

The Clippers, who are now sporting a 7-4 win-loss card, will go up against the New Orleans Pelicans in the second leg of their back-to-back schedule. It will be a big night for the team as their recently-acquired superstar forward Paul George will make his much-awaited debut. Meanwhile, the Rockets will look to improve their 8-3 record when they host the Indiana Pacers on Friday.

Prized rookie Ja Morant showed his willingness to take the last shot as he pushed the Memphis Grizzlies to a thrilling 119-117 win over the Charlotte Hornets. Morant had 23 and 11 assists in the win, including a game-winning lay-up over the outstretched hands of the Hornets defenders. Veteran big man Jonas Valanciunas dominated on the inside as he finished with 18 points and 13 rebounds. Jaren Jackson Jr. put up 16 points and 6 boards, while Serbian swingman Marko Guduric came off the bench to contribute 17 markers.

Grizzlies head coach Taylor Jenkins was impressed with his rookie’s confidence and even said that the team feeds off Morant’s energy, per David Cobb of the Memphis Commercial Appeal.

“He’s got that ultra-confidence and it just kind of permeates throughout the team when he gets going.”

It was an inspired showing from Morant, who had his family and relatives watching the game. Even though it was a road game for the Grizzlies, Morant actually started playing basketball in South Carolina. The 2019 2nd overall draft pick is already posting averages of 18.3 points, 3.3 rebounds and 5.8 assists per contest.

Terry Rozier had his best game as a Hornet in the loss. The spitfire combo guard poured in 33 points, on top of 5 rebounds and 6 assists. Malik Monk had 20 points, 8 boards and 5 assists off the bench, while Devonte’ Graham produced 19 markers. The Hornets will have Blake Griffin and the Detroit Pistons as their next assignment. On the other hand, Morant and the Grizzlies will have a big game coming up as they test their mettle against Donovan Mitchell and the surging Utah Jazz.