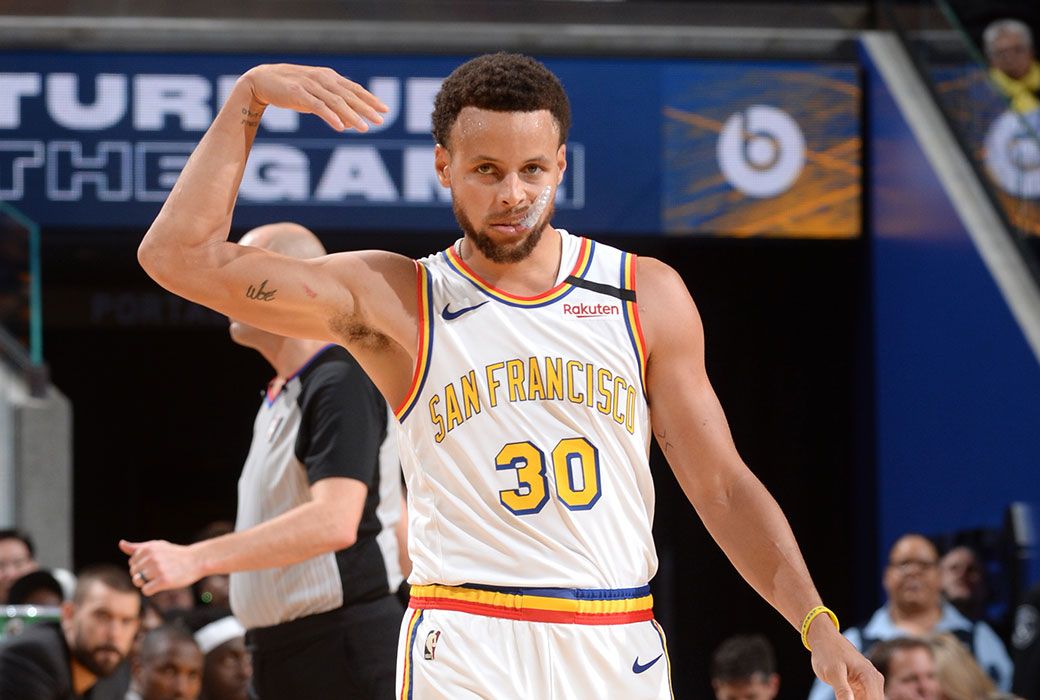 Golden State Warriors superstar Steph Curry is slowly getting his into deadly form after another strong performance in a win. Curry led the Warriors to an impressive 137-106 victory over the Sacramento Kings on Monday night at the Chase Center in San Francisco, California.

Less than 24 hours after scoring a career-high 62 points against the Portland Trail Blazers, the former two-time NBA Most Valuable Player picked up from where he left off. Curry had a near triple-double with 30 points on 9-for-18 shooting with five three-pointers to go along with nine rebounds and eight assists for the Warriors.

Curry also received plenty of support against the Kings, as Kelly Oubre Jr. had his best game in a Warriors uniform with 18 points on top of three rebounds and two assists, while Andrew Wiggins added 16 points to go along with five assists and three rebounds. Eric Paschall and Kevon Looney provided spark off the bench with 14 and 11 points, respectively, while James Wiseman finished with 10 points and four rebounds.

Veteran forward Draymond Green did not score much with just five points in 21 minutes, but he also posted five rebounds, five assists, and two steals. Green's presence is also being felt beyond his stats since he returned, particularly on the defensive end of the floor. Golden State limited the Kings to just 37.8 percent shooting from the field, including a measly 10-for-35 clip from beyond the arc.

"When we’re defending like that, we can get easy buckets on the other end," Green said of their defense via NBC Sports Bay Area. "As we continue to figure each other out offensively, figure out where shots are coming from, the one thing we can be consistent on is our energy and effort on the defensive end. These last two games were a good step in the right direction for us and now we’ve got to make sure we continue to build on that."

With the win, the Warriors improved to 4-3 after having a slow start this season. Curry said that they still have long ways to go this season, but the superstar point guard feels that they are heading into the right direction, as they are commanding the best effort of their opponent night in and night out. The 32-year-old remains optimistic of their chances this season despite playing without Klay Thompson, who is out for the season with an Achilles tear.

"If there's slip-ups or anybody is not locked in, it doesn't work," Curry said via NBC Sports Bay Area. "Obviously, I'm not gonna be the flashiest guy on defense but I can be solid, do my job and hold my responsibility and my matchup down. Draymond is gonna plug a lot of holes and bring leadership on that side, and we're gonna look really good."

Harrison Barnes and De'Aaron Fox each had 18 points for the Kings, while Buddy Hield ended up with 10 points and six rebounds. No other Kings scored in double figures, as they absorbed their fourth loss in seven games this season, dropping their last three games after having a strong start.

Luka Doncic had his best game for the Dallas Mavericks and helped his team score their third win of the young season. Doncic led the Mavericks to a convincing 113-100 victory over the Houston Rockets on Monday night at the Toyota Center in Houston, Texas.

Doncic, who did not play in their loss to the Chicago Bulls on Sunday with a bruised quadriceps, had a triple-double with 33 points to go along with 16 rebounds and 11 assists. It was the third 30-15-10 performance of Doncic in his young career, and Mavericks head coach Rick Carlisle feels that his star is slowly getting into his rhythm.

"His preparation schedule was thrown off, and he just got behind the curve," Carlisle   said of Doncic via ESPN. "It's pretty clear now that he's working his way back to where  he needs to be. As I mentioned the other night, all of his physical and conditioning indicators are really going in a good, strong direction, which is great. And you can tell on the floor. You can see that he's just getting better and better as each day goes by."

Starters Josh Richardson and Willie Cauley-Stein also had productive nights for the Mavericks with 15 points apiece, with the latter adding seven rebounds and two assists. Tim Hardaway Jr., who came off the bench for the first time this season, thrived in his new role. The veteran guard erupted for 30 points on 11-for-14 shooting with eight three-pointers to go along with seven rebounds and two assists, earning praises from Carlisle for his professionalism.

"It was a really strong character performance by Tim," Carlisle said of Hardaway via ESPN. "He was great at both ends of the floor. Tim Hardaway showed what class and professionalism is in responding to a lineup change."

However, the Mavericks countered with a run of their own, restoring order midway through the final quarter. Doncic and Hardaway then made big shots down the stretch, as Dallas found themselves ahead by 14 points again with almost two minutes left to play in the game, and the Mavericks did not look back en route to the 13-point victory. Carlisle loved what he saw from his team, particularly on the defensive end of the floor.

"Thought that the effort was really exceptionally good from start to finish," Carlisle said via Dallas Morning News. "I’ve been saying this and been talking about it a lot: Defensively is where we’re going to make our ground this year. That’s just how it’s going to be, and in three games, we’ve really put a tremendous collective defensive effort on and we’ve won those three games. We’ve got to build on this somehow."

Christian Wood led the Rockets in scoring with 23 points on 8-for-15 shooting to go along with seven rebounds, a steal, and a block. James Harden, who sat out in their previous game against the Sacramento Kings, returned and posted a double-double with 21 points and 10 assists on top of three rebounds and two steals. Eric Gordon chipped in 20 points and five rebounds off the bench, while John Wall added 14 points and four dimes.

New York Knicks Off to Best Start Since 2012

The Tom Thibodeau era in New York is off to a good start, as the Knicks are slowly showing promise this season. The Knicks scored a come-from-behind 113-108 victory over the Atlanta Hawks on Monday night at the State Farm Arena in Atlanta, Georgia. It was the fourth win of the Knicks in seven games, tallying their best record after seven outings since posting a 6-1 record back in 2012.

New York showed resiliency after the Hawks built a 15-point lead in the third period. The two teams went toe-to-toe down the stretch. The Hawks made it a one-point game off a three-pointer from De'Andre Hunter at the 1:40 mark of the game, but Austin Rivers made a huge three-pointer for Knicks to restore the lead to four points then Randle scored on a putback in their next possession to seal the win for New York.

"I think the togetherness is a big part of it," Thibodeau said of their early success this season via New York Post. "I think the willingness to share the ball, to play hard for each other. But it starts with our defense and the rebounding. We still have to get our turnovers down but I think just the overall way they’re playing for each other. I think that’s a big part of winning. They come in and they work every day."