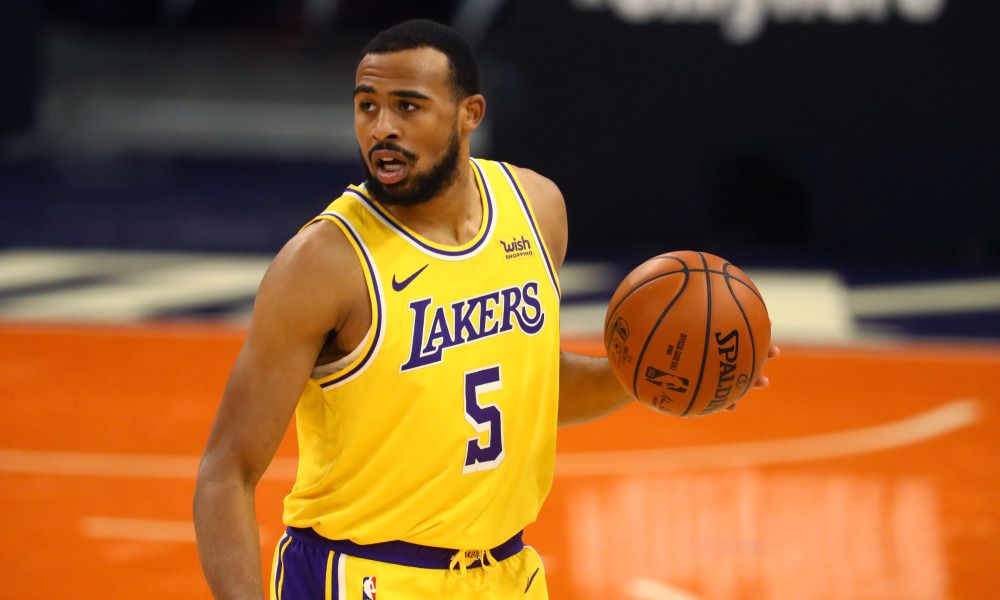 Los Angeles Lakers sophomore guard Talen Horton-Tucker continues to turn heads heading into the 2020-21 NBA season. Horton-Tucker proved that his impressive preseason debut was no fluke, as he led the Lakers to another victory over the Los Angeles Clippers, 131-106, on Sunday at the Staples Center.

THT erupted for 33 points on 11-for-17 shooting from the field, including a 4-for-5 clip from beyond the arc. Not only that, the second-year guard also posted 10 rebounds to go along with four assists and four steals, taking advantage of the 41 minutes of playing time Lakers head coach Frank Vogel gave him on Sunday.

"I look at it as a blessing," Horton-Tucker said of the opportunity that he is getting via ESPN. "It's actually crazy because I feel like what other 19-, 20-year-old gets this experience in the world? Not too many. So just being able to take everything in and learn from it every day, seeing other superstars kind of notice it is actually pretty good."

His 33-point eruption came just two days after tallying team-high 19 points and nine rebounds to lead the Lakers to an 87-81 win over the Clippers in their preseason opener on Friday. The 20-year-old guard is already making a case for a permanent spot in the rotation of the Lakers in the upcoming season.

"I would say he continues to impress," Vogel said of Horton-Tucker via Los Angeles Times. "The young man has a great attitude, a great spirit, comes to work every day with humility, he just goes out there and kicks people’s butts, quite frankly. He’s a heck of a talent. I’m coaching him harder than the rest of the players on the team, a lot of  the veterans, because I think he’s got a chance to be really good for us immediately, not   just down the road."

The former Iowa State standout played just six games in his rookie year last season, where he averaged 5.7 points and 1.2 rebounds. The Lakers lost guards Danny Green, Avery Bradley, and Rajon Rondo in the offseason, but they also added Dennis Schroder and Wesley Matthews. There is strong competition in the guard rotation, but Vogel admitted that THT's pre-season performance will make his job difficult in terms of giving him playing time.

"It's going to make my job difficult for sure," Vogel said. "We have a very deep team. No minutes are guaranteed. He's going to keep playing at a high level, and that should push everybody else to stay playing at a high level. It does give us that luxury of having him carry the load some for some of our guys who played deep in the championship run last year and had a short offseason."

Kyle Kuzma also had an outstanding game for the Lakers with 25 points to go along with six rebounds and four assists, while newly-acquired forward Montrezl Harrell made an impact off the bench with 19 points and 11 rebounds on top of three assists and two blocks. Kentavious Caldwell-Pope had 16 points and five rebounds, while Quinn Cook registered 14 points and seven assists in 31 minutes.

Marcus Morris, who sat out their first preseason games due to knee soreness, contributed 11 points and three rebounds. Veteran center Marc Gasol had just six points but added five assists, displaying his excellent passing ability, which could be a factor for the Lakers in the upcoming season, where they will be defending the championship they won inside the NBA bubble in October.

Lakers superstar LeBron James and Anthony Davis did not play again on Sunday, but Vogel revealed that both players will likely suit up in their pair of exhibition games against the Phoenix Suns on Wednesday and Friday. Vogel said that James and Davis are participating fully in their practices, but he feels that both superstar are not ready for real action so far after their high workload in the previous season.

"Well, they’re not ready yet, but they will be on the 22nd, and when we’re ready to start games, those guys will be ready to go," Vogel said of his superstars via Los Angeles Times. "But we’ve been trying to strike that balance of easing them in enough while at the same time making sure they’re working to be ready for the beginning of the season. I think they both look really good. They’re probably not ready to play in a regular- season game today, but they’re both in good shape and hopefully can continue to build up to the start of the season."

The Lakers, who defeated the Miami Heat in the 2020 NBA Finals, will kick off their title defense on December 22 against the Clippers. They will then face the Dallas Mavericks on Christmas Day before going up against the retooled Minnesota Timberwolves on December 27 at the Staples Center.

The last time NBA fans saw Kevin Durant, he was holding onto his foot in Golden State Warriors uniform and the rest was history. Durant returned from a long recovery from a torn Achilles tendon, this time in a Brooklyn Nets uniform, leading his team to a 119-114 win over the Washington Wizards on Sunday at the Barclays Center.

Durant, who missed the entire 2019-20 NBA season, finished with 15 points in 24 minutes against the Wizards. The former NBA Most Valuable Player shot just 5-for-12 from the field, but also tallied three rebounds, three assists, and two blocks. The superstar forward admitted that he did not play that well on Saturday and he was very nervous in his return from a major setback.

"I was anxious, nervous," Durant said via ESPN. "I visualized this moment for so long -- nine, 10 months of thinking about how it would be, this next phase of my career. I felt like I was chomping at the bit, especially once COVID hit because I didn't see a future -- when the season was going to start in the future. I was going through it."

Durant started the game with a dunk, and made a highlight pass to DeAndre Jordan for a dunk. He also once drew a charge from sophomore forward Rui Hachimura, showing signs that he is ready to play physical despite coming off an injury. Nets rookie head coach Steve Nash was impressed with what he saw from Durant, admitting that he and most basketball fans missed seeing the high-scoring forward do his stuff on the hardcourt.

"When you have that type of injury, it is kind of remarkable he's at the level he's at," Nash said of Durant. "It's amazing. This is an injury that very few people have conquered, so to speak. It's beautiful to see him back on the basketball court. I think the world missed him. I certainly did."

Durant, who is playing in the second season of his four-year contract worth $164.26 million with the Nets, said that he is still a work in progress. However, the two-time NBA champion vowed that he is determined to reach his peak form, and help the Nets compete at a high level this season. The Nets are one of the favorites to win the Eastern Conference title this season, especially if Durant will stay healthy for the entire season.

Kyrie Irving, who has not played for the Nets since February after having a shoulder surgery, also had a productive return for Brooklyn. The superstar point guard finished with 18 points on an impressive 7-for-9 clip from the field, including two three-pointers, to go along with four assists in 17 minutes of playing time.

Landry Shamet, who was acquired by the Nets in a trade with the Los Angeles Clippers in the offseason, provided spark off the bench with 13 points in 21 minutes, while Timothe Luwawu-Cabarrot and Taurean Prince chipped in 11 points from the second unit. Spencer Dinwiddie also had a productive night for the Nets, ending up with 10 points to go along with seven assists and six rebounds for Brooklyn, who shot 51.4 percent from the field as a team.

On the other hand, Hachimura led the Wizards with 18 points and four rebounds, while Raul Neto posted 17 points on top of six assists and three rebounds. Rookie forward Deni Avdija, the ninth overall pick in the 2020 NBA Draft, also had an impressive debut with 15 points on a perfect 6-for-6 clip from the field. The Israeli prospect also had three three-pointers, four rebounds, and two assists for Washington.

Troy Brown Jr. had 15 point and six rebounds to go along with five assists and three steals, while Mo Wagner added 13 points, seven rebounds, and four steals off the bench for Washington, who opted to rest starters Bradley Beal, Russell Westbrook, and Davis Bertans in their first preseason game.