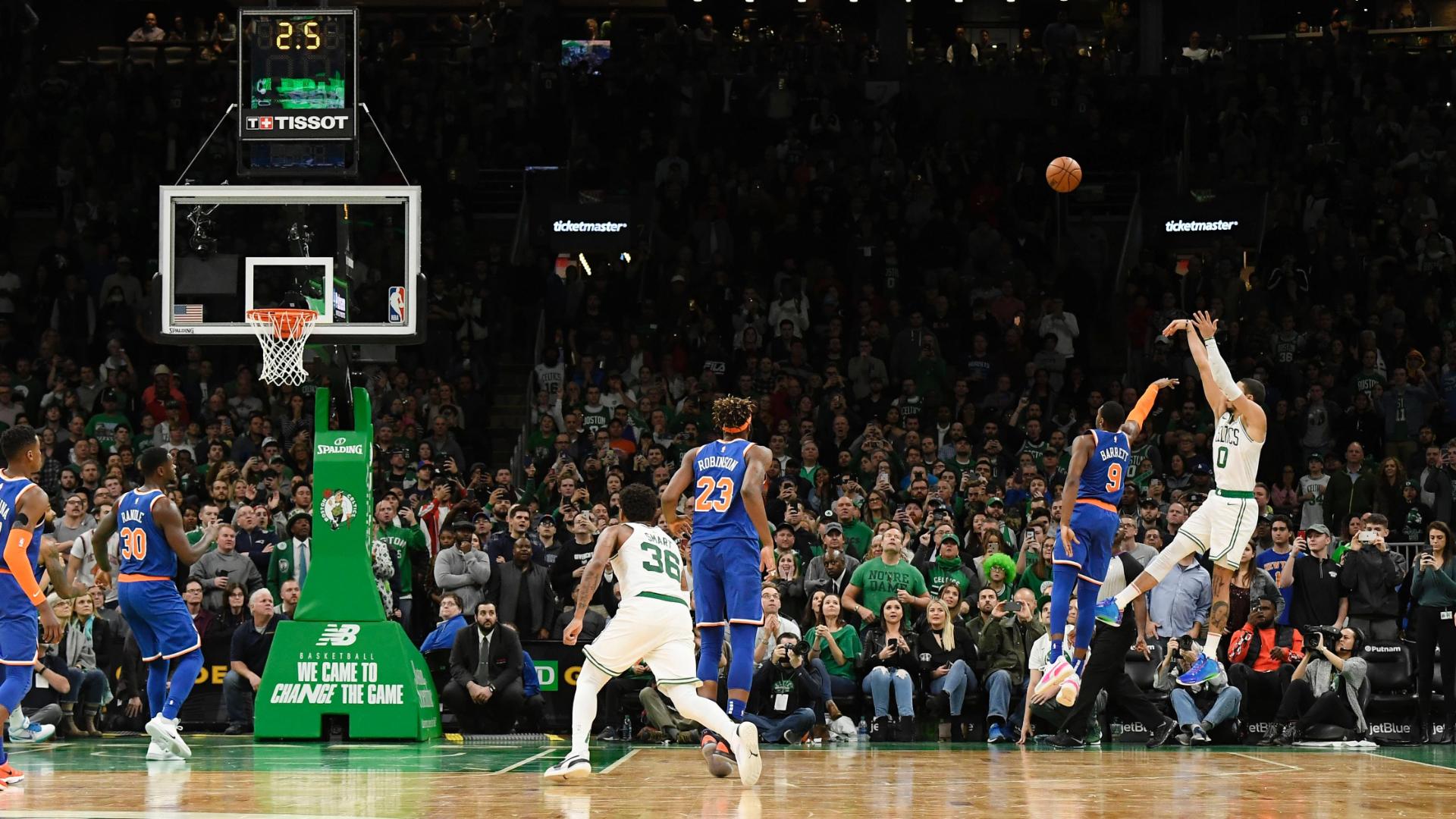 Young budding forward Jayson Tatum capped off a 24-point night with a game-winning corner jumper as the Boston Celtics take down the New York Knicks, 104-102. Tatum continued his consistent shooting streak in the win, while also grabbing 6 boards and dishing out 3 assists. All-Star point guard Kemba Walker produced a game-high 33 markers, while Gordon Hayward came up with an all-around stat line of 13 points, 9 rebounds, 4 assists and 2 steals.

The step-back corner jumper also marked Tatum’s first game-winner of his young career, an excellent feat he can build upon as he tries to have a break-out season in his third year in the league. However, the 21-year old future star played down this memorable night, saying that there’s still a lot of things for him to work on, per Matthew Doherty of boston.com.

“It feels great but I don’t want to get too excited. The guys I look up to in this league, they do things like this all the time. I’ve got somebody on my team like Kemba [Walker], he’s done this many a times. Kyrie [Irving] did it. I feels good to hit one. But now I’ve got keep working at it though.”

It was a close affair throughout the night, with the Knicks having a precarious one-point lead at the end of the first half. Knicks stretch forward Marcus Morris, an ex-Celtic, drilled a trifecta to tie the game at 102, but Tatum answered with the incredible off-the-dribble jumper. With only a little above two seconds remaining on the clock, the Knicks didn’t have a timeout left. Instead, they tried a full-court pass off the baseline inbound but turned the ball over.

Morris, who played for Boston just a season ago, led the Knicks with a team-high 29 points and 9 boards. Prized rookie forward RJ Barrett had another all-around outing of 15 points, 7 rebounds and 5 assists, while combo big man Bobby Portis came off the bench to contribute 13 markers.

Prior to the game, Morris spoke to the media and expressed his disappointment with how the Celtics camp approached his free agency last summer. The veteran power forward emphasized that no one from the organization reached out to him at that time, per Quenton S. Albertie of the Celtics Wire.

“I didn’t get a phone call, I didn’t get anything from Boston, so it was very      surprising… My two years there was special. I thought I did a lot for the team. I         thought I at least deserved a phone call but it is what it is.”

As surprisingly impressive as they have been early this season, the Knicks have already lost a bunch of close-call games. They are now sporting a 1-5 record, and will face De’Aaron Fox and the Sacramento Kings in their next assignment. Meanwhile, the Celtics have raced to a quiet 4-1 win-loss card and will go up against Kevin Love and the Cleveland Cavaliers on Tuesday.

The Brooklyn Nets turned in a balanced offensive performance as they thwarted James Harden and the visiting Houston Rockets with a much-needed 123-116 victory. Newly-acquired versatile forward Taurean Prince topscored for Brooklyn with 27 points built on six three-pointers. Prince also had 12 rebounds in the win, giving him a double-double night to lead his team to victory. Kyrie Irving also pulled in a double-double of his own as he finished with 22 points and 10 assists, while scoring swingman Caris LeVert chipped in 25 markers.

After building a nine-point lead after the opening quarter, the Rockets would then lose steam. The Nets rallied back in the second period as they erased the deficit and even led by two points after the first half. They continued their rampage up to the second half as they mounted a 12-point lead entering the fourth quarter.

Nets head coach Kenny Atkinson praised his team’s effort, but also noted that they have their work cut out in front of them in terms of offensive efficiency and cohesiveness, per the Nets’ official page on NBA.com.

“We’ve got a long way to go. That’s my gut. We’re still obviously the turnover thing, I’ve never quite seen that to that degree. We’re zigging and when one guy’s zigging when the other guy’s zagging an one guy cuts and we throw it and he doesn’t cut. We’ve got to figure it out. Our defense kind of bailed us out tonight, but we’re a long ways away to getting to that point. I know we’re gonna get there because I know what  type of guys we have. We have high IQ guys that it’s just a matter of fixing some  things spacing-wise. I think that’ll help. And these guys playing together longer. I think that’s just what it is.”

Veteran sharpshooter Joe Harris also came up with a near double-double of 15 points and 9 boards, while Garrett Temple led the squad’s second unit as he amassed 16 markers off the bench. The Nets shot a solid 59% clip from beyond the arc, making 19 of their 32 three-point attempts.

Harden had a game-high 36 points for the Rockets, while Russell Westbrook stuffed the stat sheet with 27 points, 7 rebounds and 8 assists. The Rockets will try to bounce back from this loss as they visit the streaking Miami Heat team on Sunday.

The LeBron James-Luka Doncic duel lived up to the hype as both superstars showed out in the Los Angeles Lakers’ thrilling 119-110 overtime win against the Dallas Mavericks. James racked up a massive triple-double night of 39 points, 12 rebounds, 16 assists and 4 blocks, while co-star Anthony Davis totalled 32 points, 8 boards and 2 blocks in the victory. Danny Green, who hit the buzzer-beating corner triple to force overtime, logged in 14 markers.

At the end of the exciting game, James had heaps of praises for the 20-year old Doncic, per Dave McMenamin of the ESPN.

"I don't really get into the one-on-one battle. Obviously he's a great young talent, I  love his game, his ability to not only create shots for himself, but you guys know I love the fact that he can get great looks for his teammates. That's what I thrive on, that's  what I've always believed in, and he just plays the game the right way."

Doncic led the way for the Mavericks as he finished with 31 points, 13 boards and 15 assists. Kristaps Porzingis was fairly quiet on offense as he only turned in 16 markers, and made just six of his 16 total attempts from the field.

The Mavericks will face the Cavaliers on Sunday, while the Lakers continue their winning ways with a match-up against their rival team San Antonio Spurs.