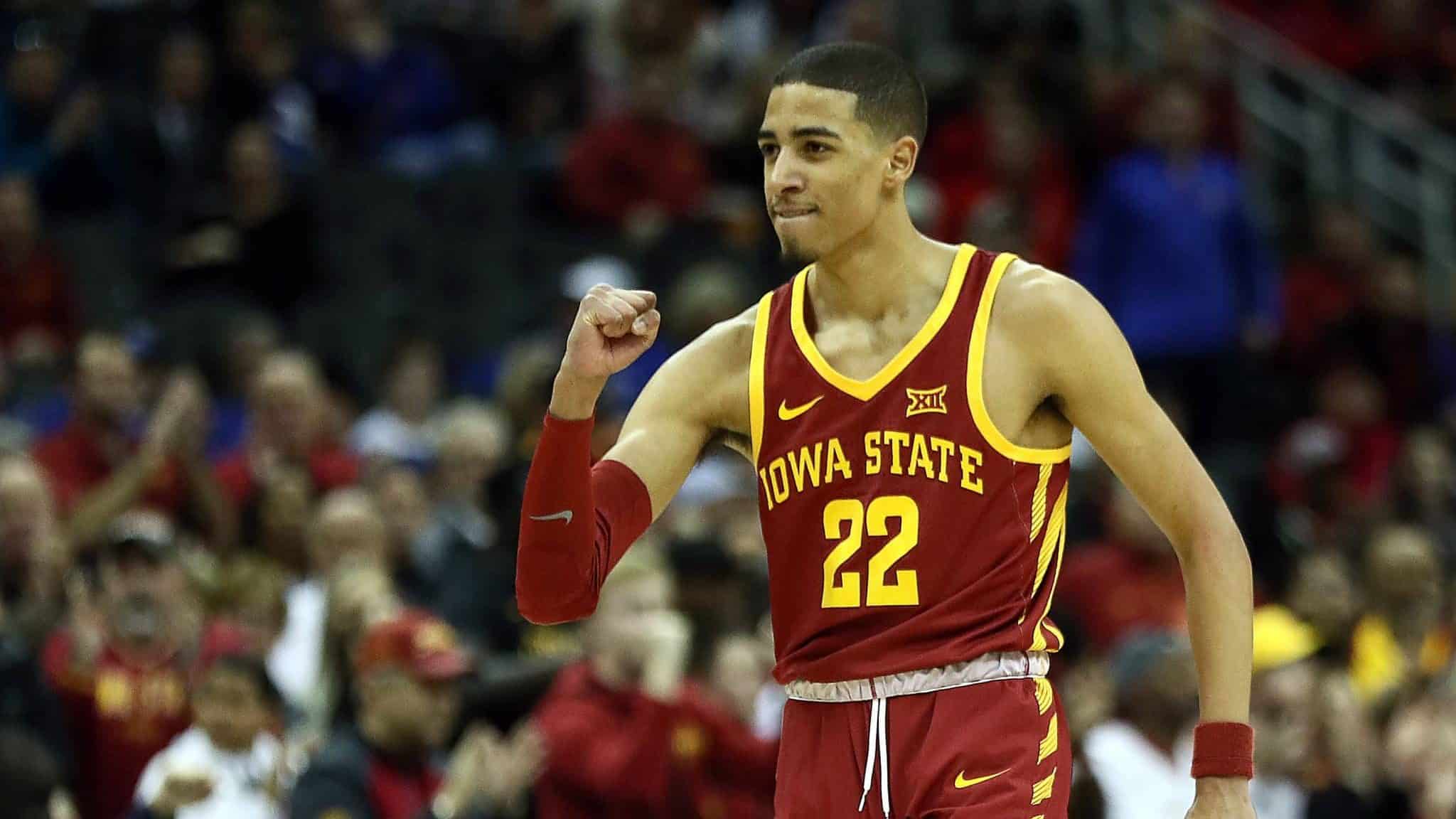 NBA Draft 2020: Tyrese Haliburton Believes He is a Good Fit for the Golden State Warriors

Iowa State standout Tyrese Haliburton is not considered as one of the top five prospects in the 2020 NBA Draft, but the young point guard believes that he deserves a lot of attention. Haliburton, who is projected to be drafted from sixth to tenth in this year's draft, believes that he would be a good fit for the Golden State Warriors.

Haliburton feels that his ability to score and shoot makes him a good option for the Warriors in the draft. The 20-year-old guard had a great sophomore season for Iowa State, where he averaged 16.6 points on 59.2 percent shooting from the field and 41.9 percent from beyond the arc.

"I think I'm a really good fit there," Haliburton said when asked about being drafted by Golden State. "I think I can obviously come in and make shots as well and be in the first unit or lead the second unit."

Haliburton, who also averaged 6.4 rebounds and 2.5 steals per game for Iowa State, said that he can also contribute in other ways aside from his shooting. When it comes to scoring, he felt that he was able to showcase his good shot selection during his two years in college.

"I do it in a different way," Haliburton said of his game. "I don't take tough shots; I don't force bad things. I try to get the best looks at all times, and I think people aren't used to that. People are used to guys taking tough shots for no reason at times."

There were concerns about his shooting mechanics, but Haliburton is not too bothered. He said that he is not thinking of what the critics are saying because he was able to prove that he can knock it down during his collegiate career. However, he also added that he is willing to alter his form to become more difficult to guard in the NBA.

"If you think my shot now is ugly, my shot when I first got to high school started at my knees," Haliburton told The Ringer. "I don’t really care what people say about my shot as long as it’s going in. I know I’m going to have to alter it. I’m altering it right now just because it’s going to be tougher with being guarded more. But this is how I’ve hooped my whole life. And it’s been working. It’s just now about repetition and putting time into it."

Most analyst do not expect the Warriors to add another point guard from the draft because Steph Curry is still in his prime. However, the Warriors are in need of another ball handler, which they sorely lack last season after losing Shaun Livingston, who was a huge factor during their three championships in five seasons.

Josh Schrock of NBC Sports agreed that Haliburton would be a good fit for the Warriors. If they are determined to draft Haliburton, they can acquire another asset by moving down from the second spot. But if there is no attractive deal on the table, Schrock said that he will not be surprised if Golden State decide to use the second pick for Haliburton in next month's draft.

"Many see Haliburton as a mid-lottery pick, one the Warriors likely would need to trade down to feel comfortable drafting," Schrock said. "But if Bob Myers and Steve Kerr see a high IQ guard who can knock down open jump shots, defend and make plays, they might as well pull the trigger at No. 2 if no deal can be struck. Haliburton seems like exactly the type of player they've been looking for."

The Warriors are keeping their plans close to their chest, but many experts are expecting them to trade the pick. Golden State is coming off a disappointing season, where they finished with the worst record in the league. However, expectations will be high for the Warriors, as they are set to welcome a healthy Klay Thompson next season. Thompson missed the entire 2019-20 NBA season after sustaining a torn ACL in the 2019 NBA Finals.

French point guard Killian Hayes is slowly getting a lot of attention heading into the November 18 draft. Some mock drafts are now projecting him as the potential fourth pick of the Chicago Bulls. But if he is still available at No. 8, the New York Knicks will reportedly strongly consider drafting him. According to Marc Berman of New York Post, the Knicks rank Hayes as they second-best point guard on their board behind projected top-three pick LaMelo Ball.

"It doesn’t mean the Knicks will pick him if he falls to No. 8 in the NBA Draft, but    Killian Hayes currently has a narrow edge as the team’s second point guard on the board after LaMelo Ball, according to NBA sources," Berman said. "Hayes, the 19- year-old left-hander who played in Germany last season, is considered to have a more supreme skill set than the other lottery-projected point guards such as Tyrese Haliburton, Kira Lewis, Cole Anthony, RJ Hampton, Theo Maledon and Tyrese Maxey."

Hayes played for Ulm in the EuroCup and German League this year, where he averaged 11.6 points and 5.4 assists to go along with 2.8 rebounds and 1.5 steals per game. Interested teams might ask for private workout because scouts did not get a lot of chance to scout him in person due to the pandemic. According to Sam Vecenie of The Athletic, there are varying evaluation on Hayes, with some experts expecting him to fall late in the lottery.

"He’s all over the board for evaluators across the league, from a few having him in the top-five to a few having him just outside of the lottery," Vecenie said. "Some really love his feet and passing ability and think he’s going to turn into a real starting option at the lead guard spot and someone who affects winning. Those evaluators also tend to buy into his pull-up jumper being translatable to more situations than it’s shown so far in his career."

If he eventually ends up with the Knicks, Hayes will have an easier time transitioning to the professional league. Fellow French point guard Frank Nitlikina is still with the Knicks, and Hayes previously revealed that he has talked to the former first-round pick a lot about the NBA. However, New York's plan could change, depending on the moves that they will make, as they are currently being linked to veterans Chris Paul and Carmelo Anthony.

LaMelo Ball is one of the most polarizing prospects in the 2020 NBA Draft not only because of his potential but also because of his surname. His father has established their own sneaker line in Big Baller Brand, but the potential top-three pick in the upcoming draft opted to sign with a competitor. Ball signed a multi-year contract with Puma, making him one of the faces of the brand in the league.

"I am really excited to be joining the Puma family," Ball said via ESPN. "I believe the brand is the perfect partner for me because Puma will allow me to just be myself. I want to be 100 percent authentic, whether that's playing basketball or showing off my personal style, and that's what I want to do with Puma."

Reports indicated that Puma will release their first product for Ball in time for the November 18 draft. The company viewed the 19-year-old point guard as the most talented prospect in this year's class. With his playmaking and scoring ability, Ball is projected to land in the top three either with the Minnesota Timberwolves, Golden State Warriors, or the Charlotte Hornets.

Puma global director of brand and marketing Adam Petrick said that they are very thrilled to add Ball to their growing family of endorsers in the NBA. Puma previously agreed to deals with RJ Barrett of the New York Knicks, Michael Porter Jr. of the Denver Nuggets, and Kyle Kuzma of the newly-crowned champions Los Angeles Lakers. Petrick said that they cannot wait for Ball's impact to their company, calling him a "natural fit" to them.

"LaMelo's physical gifts and dynamic play on the court, as well as his unique sense of personal style, make him a natural fit for Puma," Petrick said. "We are thrilled to add him to our roster of talented athletes, and at just 19 years old, we can't wait to see his impact on the broader culture surrounding basketball."

Ball's move would also have a great impact on Big Baller Brand. There is a growing speculation that LaVar Ball and BBB will eventually fold after losing not only LaMelo but also New Orleans Pelicans point guard Lonzo Ball. Ball has yet to sign a sponsorship deal but he is expected one soon after signing with Klutch Sports. Nike is reportedly on his radar, citing the connection of four-time NBA champion LeBron James of Klutch Sports to the shoe company.