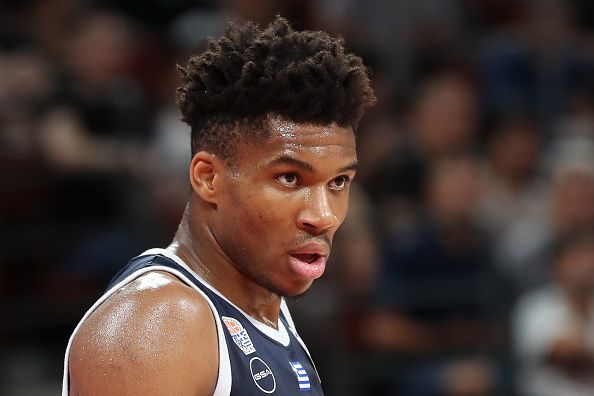 NBA Free Agency News: A Giannis-Warriors Pairing Could Be In The Works In 2021

Is Antetokounmpo bound to rep the Bay Area

Will we be seeing another MVP take his talents to the Bay Area? With the odds telling us that there is a higher chance that the reigning Most Valuable Player Giannis Antetokounmpo will forego a potential contract extension with the Milwaukee Bucks, a 2021 free agency class bannered by the Greek Freak will be an exciting offseason to look forward to. While staying in Milwaukee is a practical choice for Giannis, an opportunity to start a new dynasty in Golden State could be more enticing.

During ESPN’s regular show of The Jump, analyst and insider Ramona Shelbourne reported that the Warriors could be a frontrunner for the services of the 6-foot-10 point forward.

“The one team lurking out there — I don’t know how this would happen — but the Warriors have always been the big threat to go after Giannis.

It would be a difficult construction to make happen, but that is the one looming threat. It comes down to what kind of guy is Giannis. What does he want his legacy to be? Is he the kind of guy who stays with one team his entire career and tries to bring a championship to Milwaukee or does he pull a Kevin Durant and go join a group of super friends?”

Another important fact to consider is that Giannis and Steph have the same agent in Jeff Austin of the Octagon. We have seen Klutch Sports’ LeBron James and Anthony Davis form a duo with the Los Angeles Lakers. Could we witness another pairing in Curry and Antetokounmpo?

Of course, there is also the possibility that Giannis remains loyal to the team that drafted and believed in him. After all, the reigning MVP was just a skinny and lanky athletic kid early in his career. He didn’t make much noise, but the Bucks continued to give him more playing time on the court, leading to a vast development in his overall skills and performance.

Giannis has already established his name among the top-tier superstars in the league, and he may become the face of the NBA by 2021. If he remains in Milwaukee, he will have the power and influence to attract stars and quality role players to join the Bucks. The 2021 free agency class may be as stacked as this year’s batch. Kawhi Leonard and Paul George could opt out of their contracts with the Los Angeles Clippers after the 2020-21 season. A 37-year old LeBron James will still be an All-Star caliber player. Jrue Holiday, Bradley Beal, Rudy Gobert, Victor Oladipo and DeMar DeRozan should also make the 2021 free agency a very interesting one.

Last season, Antetokounmpo racked up a stat line that consisted of career-highs across the board. The 24-year old forward averaged a double-double of 27.7 points and 12.5 rebounds, while filling the stat sheet with 5.9 assists, 1.3 steals and 1.5 blocks per contest. It may be written on paper that he put up a measly 26% clip from beyond the arc, but Giannis has improved with his shooting and has shown a lot of confidence in hitting the three-point shot.

As for his loyalty to the Milwaukee organization, Giannis emphasized his appreciation of how the team has also exercised loyalty to its players. Then-ESPN writer Chris Haynes wrote a column about it, including this quote from Antetokounmpo:

"As long as Milwaukee does the right moves and we're a championship [contending]  team, I'm not going nowhere. This is my home. All I know is loyalty and this is an organization that [has preached that] since day one and hopefully I can help them bring joy to the fans and bring joy to the city in the future with a championship."

Despite their disappointing Conference Finals exit last season, the Bucks have brought back the core of their squad. They have re-signed All-Star gunner Khris Middleton, acquired two more sharpshooters in Kyle Korver and Wesley Matthews, and signed Robin Lopez to back up his brother Brook Lopez in the frontcourt.

With a dire need to have another shot creator on their roster, the Detroit Pistons have acquired BIG3 MVP and seven-time All-Star Joe Johnson. Here’s ESPN’s report on this exciting development for the Pistons fan base.

“The Detroit Pistons and veteran swingman Joe Johnson have agreed to terms on a deal, according to ESPN and multiple reports.

The deal is worth $2.6 million and has $220,000 in guaranteed money, a source told ESPN's Bobby Marks. The balance of the contract will become fully guaranteed if  Johnson is on the roster past Jan. 7.”

The 38-year old scorer has made waves this summer after leading the Triplets to a successful BIG3 title run. He showed that he still packs the elite scoring touch that made him a star in the NBA, gaining himself a lot of interest from contending teams in the league. Johnson last appeared for the Houston Rockets during the 2017-18 season, but his minutes and role decreased in the playoffs. An interview with Undefeated’s Marc J. Spears shed light on that disappointing year for Johnson, saying that his mother was very sick throughout the 2017-18 season. Diane Johnson passed away this February.

“My mom was sick the whole time [in the 2017-18 season]. It was not even possible for me to play even if teams were calling. With her being that sick, I spent a lot of time in Little Rock last year.

I have my moments when it is tough on me, it is hard on me. When I go home to Little Rock, I still stay in her house, and there is nobody there but me to check on it. So it is still tough, but I just try to keep myself busy.”

Johnson’s arrival in Detroit will surely be a welcome sight for the Blake Griffin-led Pistons. The Pistons front office made a lot of under-the-radar moves this offseason, acquiring Derrick Rose to boost the second unit. New faces Tony Snell and Markieff Morris will also provide more perimeter shooting. The team has also brought in stretch forward Michael Beasley, although there are speculations that it has become unlikely for the former second overall draft pick to stay with the team before training camp officially begins. Emiliano Carchia of Sportando reported that Beasley may be going back to China this season.

“Shanxi is trying to bring Michael Beasley back to China, a source told Sportando.

Beasley agreed to terms with the Pistons last month, but never officially signed in Detroit. The former 2nd pick of the NBA draft has played 26 games with the Los Angeles Lakers averaging 7 points and 2.3 assists last season.”

The trio of Griffin, Andre Drummond and Reggie Jackson will still be expected to lead the way in Detroit. But if the two-big man set-up of Griffin and Drummond again fail to produce results this upcoming season, we might see a bevy of changes for the Pistons before the February trade deadline.

To describe the New York Knicks’ offseason as disappointing is an understatement. They traded away young star big man Kristaps Porzingis to free up the cap space needed to sign two max free agents this season. But stars like Kawhi, Durant and Kyrie spurned them and instead signed with other teams. New York was once looked up to as the greatest city to play basketball in, but that’s not the case nowadays. Former Knicks center Enes Kanter may have an idea of the reason behind that, as he told Howard Beck during an episode of The Full 48 podcast.

“Not many people know that, but players talk. From different teams, they talk. I’m not blaming anybody. I had an amazing time with the Knicks. But other teammates that I talked to or if they’re on different teams, they always said, ‘Amazing city, MSG is amazing everything is so good, but the ownership.’ They would just keep saying, ‘But the ownership.’ … Some of the players I guess are just scared to come here and don’t even want to deal with that.”

Kanter, who agreed to a two-year, $10 million contract with the Boston Celtics this summer, played for the Knicks these past couple of seasons. Despite a productive 2017-18 season that saw him put up a double-double average of 14.1 points and 11.0 boards per contest, Knicks head coach David Fizdale would drop him off the rotation the next year. The Knicks had plans to develop their younger assets, and Kanter wasn’t a part of that. He was eventually waived by the team, giving him the opportunity to sign with the Portland Trail Blazers and play in the postseason.