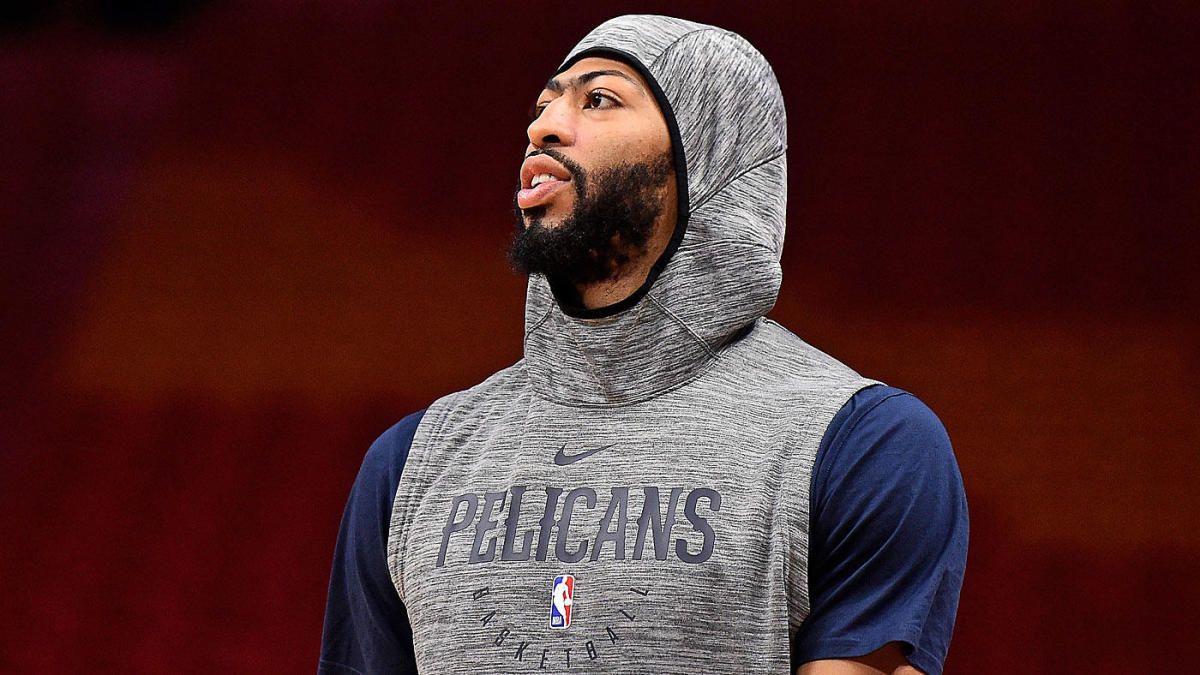 New Orleans Pelicans star big man Anthony Davis has finally narrowed down his trade destinations to two teams: the Los Angeles Lakers and the New York Knicks. Shams Charania of The Athletic reported about this interesting development from the AD camp.

“Davis is now focused on the Lakers and Knicks as the two desired long-term destinations, league sources told The Athletic. Davis has not given Griffin or the Pelicans a new formal list. He will be a free agent in 2020.”

Charania also singled out that contending teams like the Los Angeles Clippers, the Brooklyn Nets and the Boston Celtics are still interested in acquiring the superstar. Optimism on the thought of Davis staying with the team grew when the Pelicans drew the top pick in this year’s draft, obviously a golden opportunity to nab transcendent college star Zion Williamson from Duke University. But after a sitdown with Pelicans vice president of basketball operations David Griffin at Los Angeles last week, Davis made it clear that he still wants to play for another team next season.

ESPN’s Adrian Wojnarowski also reports that Griffin is open to a multiteam trade, as long as they would give the Pelicans with a bevy of assets in return.

“David Griffin, New Orleans' executive vice president of basketball operations, has started to provide potential suitors with the framework of the package he is seeking in a trade for All-NBA forward Anthony Davis, including multiteam scenarios that would expand the Pelicans' pool of assets in a deal, league sources told ESPN.”

Those assets that Griffin greatly desires could be in the form of multiple draft picks this year, as Wojnarowski points out.

“Griffin has offered teams no firm timetable on needing a completed deal, but he has indicated that he prefers the acquisition of 2019 draft picks be completed days prior to the June 20 event in Brooklyn, league sources said. This gives the Pelicans a chance to meet and more closely examine draft candidates slotted in the vicinity of  picks potentially traded to New Orleans.”

With that said, we would expect Davis to be finally traded by next week as the 2019 NBA Draft is just waiting around the corner. The Pelicans have been very interested in acquiring the services of Lakers young forward Brandon Ingram as the core of the package that the Lakers could bring in. Aside from Ingram, the Lakers still have multiple young guns in Kyle Kuzma, Lonzo Ball and Josh Hart, but it’s hard to imagine Rob Pelinka and the LA top brass giving up all of those great assets. They could also offer the Pelicans their #4 draft pick – a chance to nab versatile players like Jarrett Culver or DeAndre Hunter.

The Knicks landing Davis could be the harder trick to pull off. By giving away Kristaps Porzingis to the Dallas Mavericks, the Knicks now don’t have a big name to exchange for Davis. New York could start with upstart point guard Dennis Smith Jr and sophomore combo forward Kevin Knox. Their third selection in the draft could be the piece that could pull the trigger, but that won’t be easy. R.J. Barrett, the projected third overall pick in the draft, has reportedly emphasized that he would want to play in New York and that is the only team where he would work out in preparation for the draft. Other than that, the Knicks could also include young assets Frank Ntilikina and Mitchell Robinson, but it would take more than those two players to provide the icing to the cake.

Despite the fact that Anthony Davis has singled out the Knicks and the Lakers as his preferred destinations, the Boston Celtics still believe that they have everything in place to make a great pitch to Davis. Charania also has the inside scoop on this rumor from the Celtics camp.

“Several teams — including the Celtics — are aggressive about pursuing Davis understanding they would potentially lose him after one season, when he is set to become a free agent. The Celtics want to pursue Davis and believe in their roster with or without Kyrie Irving, league sources said.”

From an outside standpoint, it’s difficult to understand how the Celtics could still have a very competitive roster if they trade for Davis and then miss out on re-signing Irving. Trading for Davis would require them to give up young assets like Jayson Tatum and Jaylen Brown, on top of letting go of Al Horford or Gordon Hayward just to match salaries in the trade. Young budding point guard Terry Rozier, who normed 16.5 points, 5.3 rebounds and 5.7 assists during the 2018 playoffs before losing his minutes this season when Irving came back, is due for restricted free agency and it’s a belief that the Celtics don’t have enough financial flexibility to pay their back-up guard.

WDSU’s Fletcher Mackel also reported that among the potential young guns they could receive via a Davis trade, it is Tatum that the Pelicans desire the most.

“NBA source (who I trust a lot) told me tonight he thinks Boston is landing spot for   Anthony Davis.

After an outstanding rookie season, Tatum has slightly regressed to averaging 15.7 points and 6.0 boards this year. While this is a downward trend for the 6-foot-8 combo forward, it is mainly because of the limited touches that he has gotten due to the return of Irving and Hayward. Tatum still has the tools to become a superstar in the league, and he just needs to get the opportunity to be the main man for his team.

With how positive things are turning out for Kawhi Leonard and the Toronto Raptors, there is a growing belief that the two-way superstar is now inclined on staying with the Raps beyond this season. Joe Vardon of The Athletic reports that the Clippers’ confidence on signing Kawhi this summer is already fading.

“The team most associated with Leonard as far as a landing spot in free agency are the Clippers. Their confidence in Leonard picking them in a few weeks has been reportedly high for much of the year. But, league sources said over the last few days, the Clippers are seeing what we’re seeing — Leonard leading the team for which he currently plays to the brink of its first title. The Clippers, those sources said, feel confident Leonard will answer the phone when they call on June 30, but beyond that there is no way to know what impact Leonard’s Finals run will have. Those sources said the Clippers spend most of their time in meetings preparing for scenarios in which he doesn’t come to L.A.”

With a 3-2 lead over the Golden State Warriors in the NBA Finals, Leonard is now on the brink on giving the city of Toronto its first ever NBA championship. He has also expressed his praises towards the Raptors top brass and medical team for how they managed his workload this season. With career-best averages of 31.1 points, 9.1 rebounds and 3.9 assists per game this postseason, Leonard has put in all-time playoff performances for Toronto.

For the Clippers, missing out on Kawhi shouldn’t be considered as a failure of their offseason plans. They have positioned themselves for signing two max free agents in the summer, and have a bunch of good young players on their roster like Montrezl Harrell, Shai Gilgeous-Alexander and Landry Shamet.

Aside from the Clips, it is also rumoured that the Knicks are also interested in acquiring Kawhi, per Marc Berman of the New York Post.

“According to NBA sources, Knicks president Steve Mills and general manager Scott Perry expect to get a meeting with Raptors star Kawhi Leonard and at least have a puncher’s chance despite all the Kevin Durant hoopla.”

While Durant is clearly the Knicks’ top choice in the upcoming free agency class, getting themselves in position for nabbing Leonard should do more good than harm for the playoff-hungry franchise. The glamour of playing in the bright lights of New York as well as the rich basketball culture in the city should bode well for superstars like KD and Kawhi.

Hornets not bent on offering Kemba the supermax

By accomplishing the feat of being selected to the All-NBA team this season, Kemba Walkers has become eligible to sign a supermax deal in his impending free agency this summer. Walker has always reiterated that it is his priority to stay in Charlotte, but there’s a belief that the Hornets aren’t going to offer him the supermax deal, per Shams Charania of The Athletic.

“There is doubt around the NBA that the Hornets will reach that high amount, but owner Michael Jordan’s loyalty has always been with Walker.”

This is definitely an eye-opening rumor as the Hornets have been spending a lot of money in contract extensions with the role players on the team. Among the Hornet players receiving at least $13M in salary next season are Michael Kidd-Gilchrist ($13M), Cody Zeller ($13M), Marvin Williams ($14M), Bismack Biyombo ($17M) and Nicolas Batum ($24M). None of those names speak All-Star quality so one can say that the Hornets front office have been badly investing in the past few years.

For Walker, re-signing with the Hornets would not give him the best shot of finally winning the coveted title. The three-time All-Star is now 29 year old and the championship window is slowly closing for him. With the bloated contracts on their salary book, Charlotte doesn’t have the resources to sign another max free agent unless they work out on dumping the massive contracts – which is highly unlikely.