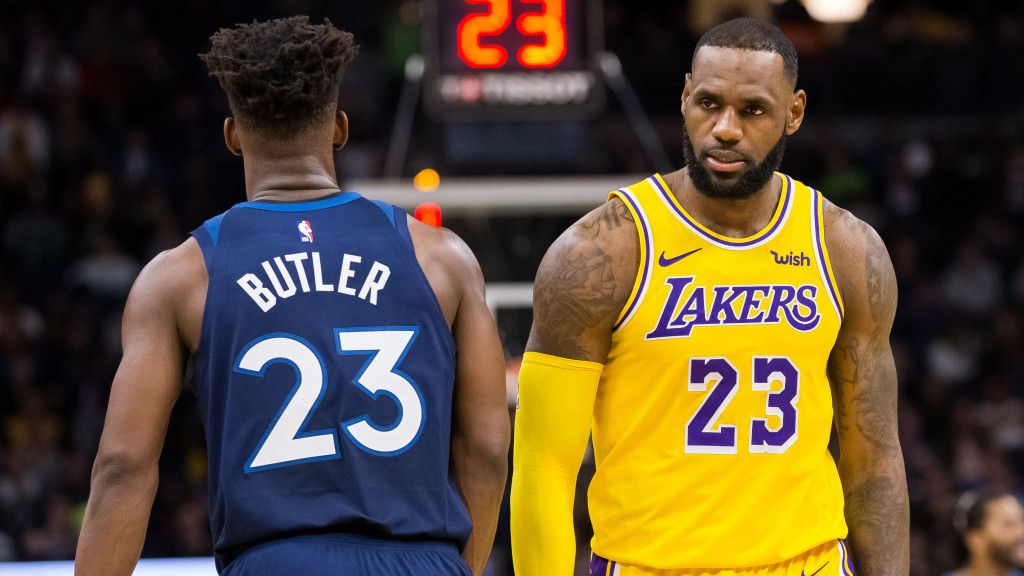 Philadephia 76ers star Jimmy Butler will be sought after when he enters unrestricted free agency this summer, and the Los Angeles Lakers could be one of the team that would come calling the two-way superstar’s number. Actually, Los Angeles Times’ Arash Markazi reported that LeBron James has already been in touch with Butler, and that the latter’s decision to choose the Lakers would depend on the contract negotiation between him and the team’s top brass.

“When @ColinCowherd asked me this morning on @TheHerd what star player the Lakers could realistically sign, I didn’t waste any time saying Jimmy Butler. He likes L.A, LeBron James has been in touch with him and he would join the Lakers in a second if they offered him a max deal.”

Butler had one of the most interesting subplots this season as he forced his way out of the Minnesota Timberwolves, and was traded to the Sixers to form a deadly combination with Joel Embiid, Ben Simmons and Tobias Harris. They were on the cusp of an Eastern Conference Finals appearance but a Kawhi Leonard buzzerbeater dashed their hopes of advancing to the next round. Butler was instrumental in that series against the Toronto Raptors, and has normed season averages of 18.7 points, 5.3 rebounds, 4.0 assists and 1.8 steals per game.

For the 29-year old Butler, his free agency decision will ultimately boil down to the team he deems to have the greatest chance to win the championship chip, per Kyle Neubeck of the Philly Voice.

“You always want to be able to win. I think that’s key, for sure. You’re looking coaches, you’re looking at the city. There’s a lot that goes into it. But for me, as long as I’ve got my people with me, everybody knows I’m cool. If they’re happy, they’re smiling, waking up in the morning and having fun, we get it, we understand. It’s a  long ways away from that, so I’m not too focused on that.”

Aside from their location and storied basketball history, the Lakers also have a bevy of excellent rising stars, a new head coach in Frank Vogel and of course, LeBron’s leadership. However, ESPN’s Adrian Wojnarowski also reported during Butler’s tumultuous stay with the Wolves that he, “had once imagined playing for the Los Angeles Lakers, but LeBron James’ arrival as the franchise’s cornerstone made it less appealing for Butler in the prime of his career.” One could make a case that Butler’s alpha dog mentality could become a conflict with a star in a transcendent status like James, and also considering that both forwards need the ball in their hands to be more effective.

If the Lakers path doesn’t present a bright light for Butler, pundits believe that the Sixers are still a clear-cut choice for the four-time All-Star, as well as the Brooklyn Nets and the New York Knicks.

Davis meet with Griffin in LA to discuss offseason plans

In an effort to make things clear on their respective plans moving forward, Wojnarowski reports that New Orleans Pelicans star big man Anthony Davis and team vice president of basketball operations David Griffin have met to concretize their plans for the future.

“New Orleans star Anthony Davis and Pels EVP David Griffin met this morning in Los Angeles and are expected to continue a dialogue moving forward, league sources tell ESPN. Griffin is making his case to AD on a future with the Pelicans. Davis can be a free agent next summer.”

Davis, who averaged 25.9 points, 12.0 rebounds, 3.9 assists, 2.4 blocks and 1.6 steals per game this year, has long issued his demand to play in a new environment away from the Pelicans. With the Lakers coming in hot after the six-time All-Star this season, no deals materialized before the February trade deadline so it’s highly-likely that Davis will be moved this summer. It won’t be easy finding a suitable trade partner for AD as the 26-year old center is set to become a free agent in 2020 so teams are wary that they will give up a lot for Davis only to see him walk away in free agency.

But the Pelicans’ case for holding on to Davis has found a new light when they surprisingly won the 2019 Draft Lottery and the opportunity to nab #1 prospect Zion Williamson from Duke. Griffin, who had tremendous success as a front office figure in the NBA, told ESPN’s Zach Lowe that they have the chance to do what the Oklahoma City Thunder did to shock the basketball world when they re-signed Paul George.

“We can be Oklahoma City with Paul George. We can hold onto [Davis] and let him  see what we really are. [Winning the lottery] changes how quickly he can buy into it. It gets us closer. Every day, maybe he believes a little more. As much as elite talent   likes to play with elite talent, I can’t imagine any elite player in his prime looking at our situation and saying to himself, ‘There’s a better grouping to play for’ than ours.”

However, The Athletic’s Shams Charania also reports that as of now, Davis still wants out of New Orleans and the meeting with Griffin could just be a confirmation of his desire to be traded.

Among the teams Davis listed as his preferred destinations are the Lakers, the Boston Celtics and the New York Knicks. The primary focus of potential negotiations would be Davis’ willingness to re-sign with the target team. Either way, we would expect a monster year from Davis next season as he throws away the off-court distractions caused by his trade demand and just focus on playing excellent all-around basketball.

Is it too early to think of Giannis’ 2021 free agency plans?

Right after the Milwaukee Bucks were ousted by the Raptors in a Game 6 thriller, ESPN’s Malika Andrews immediately diverted everyone’s attention to Giannis Antetokounmpo’s free agency in 2021. The Greek Freak has established himself as a top-tier player with his first-team All-NBA honors in the past two years, and is now the frontrunner for the Most Valuable Player of the Year plum. By being rewarded of a spot in the All-NBA first team, Giannis has now qualified for a supermax extension with the Bucks in 2020, a year before he becomes an unrestricted free agent. Of course, the Bucks will offer him the supermax but it will also depend on how the team can provide a strong supporting cast for the 24-year old forward.

The Bucks will have an interesting offseason ahead of them as All-Star swingman Khris Middleton will enter free agency, as well as Brook Lopez and Malcolm Brogdon. Nikola Mirotic and George Hill also have team options for next season, and it’s expected that the Bucks will decline those options to have more financial flexibility moving forward. Still, Antetokounmpo emphasizes that he doesn’t want to mess with the team’s equation for success and wants everyone back for next season.

For his own part, Andrews also points out that Antetokounmpo has invested so much of himself to the city of Milwaukee. While it is a small market city in the NBA, the Bucks’ success in the past few years has definitely revived the basketball energy in the community.

“Antetokounmpo has consistently made public proclamations of his love for   Milwaukee, as he grew up and became acclimated to American culture in Cream City after moving from Greece. Antetokounmpo adores the Bucks medical staff. His mother moved to Milwaukee. But he is all about winning. In more concrete terms, a source  close to Antetokounmpo said that getting to the NBA Finals is not just an ambition, it could tip the scales as he weighs his contractual future.”

Giannis posted career-highs of 27.7 points, 12.5 rebounds and 5.9 assists per contest this year. He has been improving his perimeter shooting at a steady clip, especially this postseason. Head coach Mike Budenholzer has done a tremendous job empowering the young star’s ability by establishing a smoother pace-and-space offensive system in the team. If the Bucks maintain their equation for success, it’s expected that the team’s top brass will go all-in on retaining their core or go after excellent shooters in the free agency class.