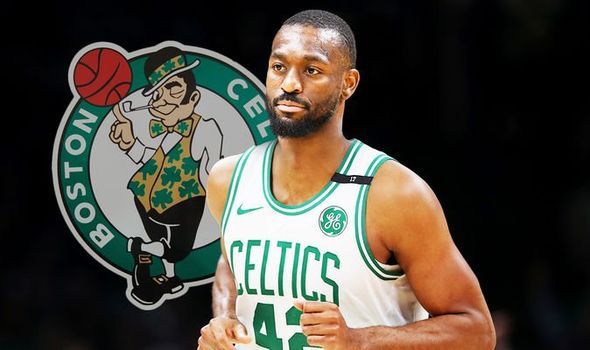 With Kyrie Irving and Al Horford reportedly out the door, the Boston Celtics could have another superstar by the start of the free agency period. ESPN’s Adrian Wojnarowski reports that the Celtics are gaining ground on acquiring Charlotte Hornets star point guard Kemba Walker, who apparently had contract extension conflicts with the Hornets front office.

Walker's eight-year career with the Hornets appears to be coming to a close, with owner Michael Jordan no longer determined to extend far enough financially to re- sign his franchise player, league sources tell ESPN.”

Wojnarowski also mentions that the Celtics are expected to offer a four-year, $141 million contract to Walker. In the past few weeks, Walker has always reiterated his desire to stay in Charlotte, even saying that he’s willing to accept a contract extension that is below the supermax. Kemba has earned the eligibility to command a supermax deal this summer after he was named to the All-NBA third team last season.

Just a couple of days ago, Marc Stein of The New York Times reported that the Celtics have become a “stealth suitor” for Walker. But not many people really paid attention to it until Wojnarowski followed up Stein’s report with an announcement that Walker and the Hornets are having conflicts in negotiating the contract extension.

Walker, 29, should already be thinking at a potential deep run at the postseason, something that he hasn’t had success with the Hornets. If Walker re-signed with the Hornets, he would be in the exact position as he was throughout his career: a main man for a borderline playoff team. Charlotte has a bevy of bloated contracts handed out to role players, and it’s difficult to imagine them being a solid player in the free agency even if successfully dump the contracts of Marvin Williams, Nicolas Batum and Cody Zeller to other teams.

Aside from Kemba, Dennis Young of the New York Daily News also mentions that the Celtics are targeting Houston Rockets young budding defensive center Clint Capela through a trade.

“Boston Celtics president Danny Ainge wasn’t willing to trade one of his precious assets for Anthony Davis, and he almost certainly won’t be able to retain his own stars, Kyrie Irving and Al Horford. But his plan C, if a report from ESPN on Thursday is accurate, is still pretty good: Sign Kemba Walker and trade for Clint Capela.”

With the Rockets announcing a full revamp of the roster save for superstar guard James Harden, Capela became an expendable asset. He has emerged as one of the young excellent defensive big men in the league, and also has a decent offensive game to go with it. The Celtics are in dire need of an intimidating presence on the frontcourt after the departure of Horford and back-up center Aron Baynes. Capela could easily fit into that starting role for Boston.

Although acquiring Capela could be tricky for the Celtics, their pursuit of Kemba could already be a done deal. The three-time All-Star will potentially join a solid small-ball line-up that will feature defensive combo guard Marcus Smart, young gunners Jayson Tatum and Jaylen Brown, and veteran All-Star forward Gordon Hayward.

Gasol opts in to stay with Raptors

Fresh off from a successful championship run with the Toronto Raptors, 34-year old All-Star center Marc Gasol has exercised his $25.6 million player option to play for the Raptors next season, per the Associated Press.

The value is approximately $25.6 million, marking the final year of a five-year contract Gasol signed with the Memphis Grizzlies in 2015. Had the 34-year-old Spaniard not accepted prior to the Thursday, he would have become a free agent on Sunday.”

Even though his play declined a little last season, Gasol was still able to put up all-around numbers of 13.6 points, 7.9 rebounds and 4.4 assists per game while hitting an outstanding 36% clip of his shots from beyond the arc. Gasol was very instrumental during the Raptors’ title run, most especially in his match-up with Philadelphia 76ers center Joel Embiid.

During a press conference with the Raptors, Gasol said that his decision will be impacted by teammate Kawhi Leonard’s own decision if he will stay in Toronto or not, per William Lou of Yahoo Canada Sports.

“I’m sure he’ll have something to do with it. I don’t think there is any other player of   his caliber in the NBA. He’s on a pedestal by himself. His age, his game, his leadership, the way he carries himself ... he’s one of a kind.”

However, reports say that the Clippers and the Lakers are gaining top traction on signing Kawhi in free agency. If Leonard indeed bolts out the door, the Raptors can build around young star Pascal Siakam, and surround vets Gasol and Kyle Lowry with another near-max free agent this offseason.

Lakers looking at Collison and Beverley to fill PG role

With speculations surfacing on social media as to the Lakers’ growing interest and opportunity to steal Kawhi Leonard in free agency, the Lakers are also targeting a couple of veteran point guards to play alongside LeBron James and Anthony Davis. ESPN’s Dave McMenamin emphasizes Darren Collison’s name among the players that the Lakers are planning to sign.

“And a name to look at for point guard is Darren Collison. A couple names to look at for the shooter position are Danny Green, J.J. Redick and even Kentavious Caldwell- Pope who has been on a couple of one-year deals and is represented by Rich Paul, just like Anthony Davis and LeBron James,” he added. “And at center, it wouldn’t surprise me if you saw Tyson Chandler and/or JaVale McGee come back, but I think the big fish they’d like to reel in would be DeAndre Jordan.”

Collison, 31, averaged a career-high in assists with 6.0 dishes last season for the Indiana Pacers. He also put up 11.2 points, 3.1 boards and 1.4 steals per game, and was stellar in three-point territory, hitting 41% of his shots from deep. Collison’s steady playmaking and three-point marksmanship will bode well with the Lakers’ two superstars.

Aside from Collison, the Lakers are also interested in the services of defensive point guard Patrick Beverley, who played for the Clippers last season. Tim MacMahon has the inside scoop on Beverley’s potential move in free agency.

“Sources: Patrick Beverley is seeking a deal in the three-year, $40+ million range.   Suitors include Mavs, Lakers, Bulls and Clippers. Agent Bill Duffy also represents Luka Doncic and is known to be intrigued by idea of pairing bulldog Beverley with   the young playmaker.”

Beverley, 30, averaged 7.6 points, 5.0 rebounds and 3.8 assists for the Clips last season. He is also a potent three-point shooter with a stellar 40% clip, and his toughness and grit on defense should be a welcome addition for a Lakers team needing a glue guy to be successful. However, Beverley’s asking price should be too much for the Lakers. Unless general manager Rob Pelinka decides to deviate from pursuing another max player and distribute their $32 million free cap space to a number of quality players, the Lakers don’t stand a chance in nabbing the services of Beverley.